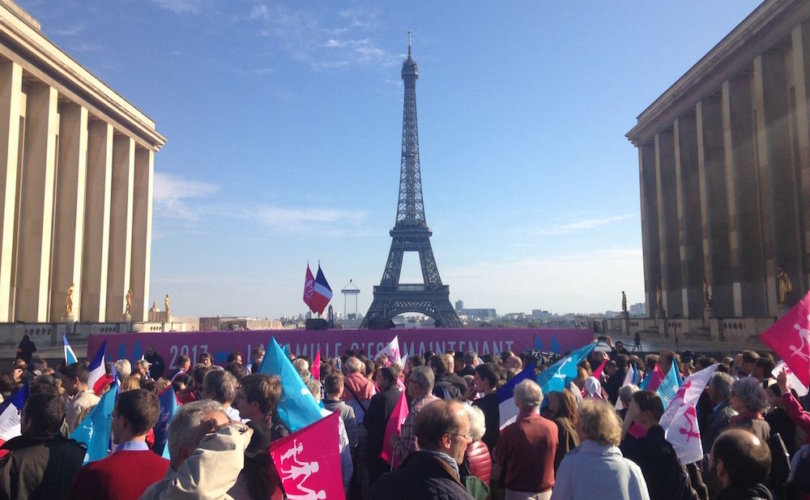 PARIS, October 18, 2016 (LifeSiteNews) – The “Manif pour tous” has done it again. On Sunday, the French capital was once again the meeting place for tens of thousands of peaceful but determined demonstrators demanding laws that respect true marriage and ban artificial procreation, especially surrogate motherhood and in vitro fertilization for same-sex couples. To be honest, in the absence of legislative deadlines, four and a half years into François Hollande’s presidential mandate, no one was expecting an enormous turn-out. But some 200,000 people, according to the organizers – the police only counted 24,000, something of an understatement… – marched through the wide avenues of the residential 16th arrondissement à Paris towards the Place du Trocadéro, across the Seine from the Eiffel Tower, in the still warm autumn sun.

Even the organizers were taken by surprise: the venue was too small for the crowds whose steady flow kept pouring onto the square between 3 p.m. and 5.30 p.m., while those who had arrived early left to make room.

The “Manif pour tous” was created in 2012 to act against the proposed same-sex “marriage” law, called “Marriage for all” or mariage pour tous, that was to be one of Hollande’s societal landmark texts. That battle was lost when the law was adopted in 2013. But the popular uprising against the destruction of marriage has deep roots. The new watchword is “We’ll never give up” – On ne lâche rien – and a genuine family movement is building up in France.

Months of mobilization but also police brutality against peaceful families that marked the demonstrations in the spring of 2013 have made ordinary folks more aware of the issues at hand – and ready to do something about them. The “Manif pour tous” has continued to work on problems such as the ills of surrogate motherhood and children’s rights, and it is striking a cord with families who are struggling to survive in the context of waning support in a country whose family policy is being slowly but surely dismantled by the socialist powers-that-be.

So they came. Thousands of young people, families with children, the middle-aged and the elderly. Their slogans were clear; they want to see the same-sex “marriage” law repealed, they want an end to the “reform of civilization” as touted by the then justice minister, Christiane Taubira when she presented the law in 2012. The blue, pink and white flags with the logo of the “Manif pour tous” – a father, a mother, a daughter and a son – are within easy reach in many family homes in France, ready for a new airing. On October 16, 2016, they had been furled for two years. People looked happy to be able to make their presence felt once again.

Under popular pressure, the “Manif pour tous,” which wanted to focus on surrogate motherhood, returned to its main and fundamental rationale, explicitly and loudly demanding for the repeal of the “Taubira law.” No major political party in France is asking for a repeal pure and simple, but the stance being taken by what appears to be a strong and determined section of the population could well carry weight as next year’s presidential election looms large in the media.

In that sense, Sunday’s demonstration was a political event in its own right, where party representatives came to obtain sympathy, and votes in view of the primary elections that shall determine, in November, who will carry the colors of the mainstream “right-wing” in May in the presidential election. Their presence does not guarantee that family-friendly laws shall be implemented by the election’s winner. But the family has, at last, become a political subject again, after years of practical neglect or outright hostility, even on the part of the mainstream “right-wing.” That is undoubtedly something the “Manif pour tous” has achieved.

The “Manif pour tous” has also gained a form of political maturity since those first days. Until now, certain political movements were excluded from the “Manif pour tous’” stages and platforms. This is no longer true. For the first time, Marion Maréchal Le Pen, the youngest deputy at the National Assembly who belongs to the long ostracized Front national (FN), as well as a regional council member of that party, was allowed to speak to the crowds, alongside a large number of representatives of mainstream right-wing parties. The FN is committed to repealing the same-sex “marriage” law, as is the Christian-Democrat leader Jean-Frédéric Poisson who was the only presidential candidate present during the march. The FN, however, wants to “improve” the existing civil union contract for homosexual “couples.”

Xavier Lemoine, Christian-Democrat mayor of the Paris suburb of Montfermeil, explained that it was not enough to bar same-sex couples from adopting even when they are legally “married.” Such a step, he said, would definitively break the still strong link between marriage and filiation as it exists in France, creating “marriages” where raising children would not be part of the institution and causing it to implode in the long run. He is also campaigning for an end to homosexual “marriage.”

Marie-Claude Bompard, mayor of the Provençal town of Bollène near Orange, also spoke to an enthusiastic audience. She is well known for having refused to “marry” two women in August of 2013. Although she did delegate a deputy mayor to perform the ceremony, she is facing prosecution on the part of an LGBT group for “discrimination.” The hearing will take place in January, she told LifeSiteNews, and it will be a landmark case for France.

Among the other political figureheads, a representative of the mainstream “Les Républicains,” Valérie Boyer, called on the crowds to applaud presidential candidate François Fillon, former prime minister to Nicolas Sarkozy. Whistles and boos met her speech: Fillon wants to amend the law to exclude the right of “married” homosexuals to adopt, not to repeal it.

One way or another, the “Manif pour tous” which has not evolved into a political movement in its own right, is clearly aiming – and succeeding – to capitalize on its popularity, using its capacity to unify or at least to obtain commitments from a many-headed political field. A difficult task indeed, when the successive laws destroying the family have been implemented by both right and left for over forty years in France.