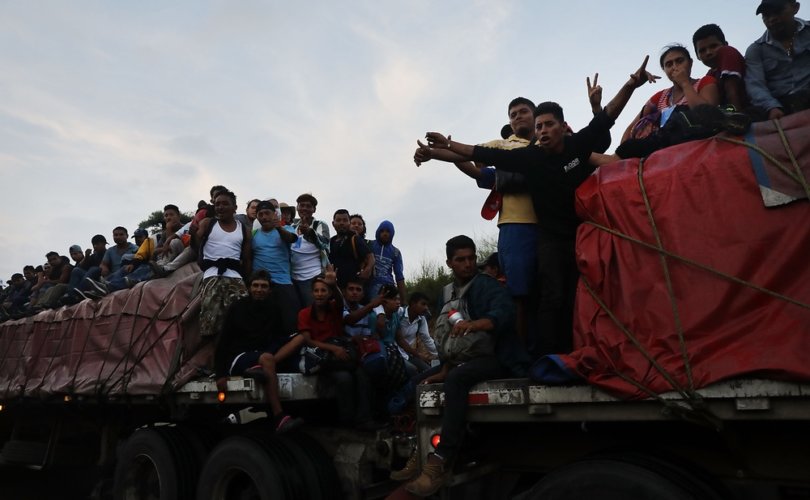 Members of the Central American migrant caravan move to the next town at dawn on November 2, 2018 in Matias Romero, Mexico.Spencer Platt/Getty Images

June 25, 2019 (LifeSiteNews) – A lay Catholic website is calling for a boycott of an annual collection to be held this weekend in most U.S. parishes benefitting the pope’s designated charities.

Complicit Clergy is urging the boycott of the Peter’s Pence collection, which is set for June 29-30 weekend Masses, stemming from Pope Francis’ controversial use earlier this year of half a million dollars from the collection to benefit Central American migrants in Mexico who are trying to enter the U.S. illegally.

“The Vatican wires half a million dollars from Peter’s Pence to aid the illegal immigrant caravan marching over the southern border of the United States,” the boycott call states. “Attention Catholics! Pencil in June 30, 2019 on your church calendar. It signifies this year’s collection day for Peter’s Pence, the global collection plate for the Pope’s favorite charities.”

The purpose of Peter’s Pence Collection, according to the website for the United States Conference of Catholic Bishops (USCCB), is “to provide the Holy Father with the financial means to respond to those who are suffering as a result of war, oppression, natural disaster, and disease.”

“Surely, the persecuted Christians in Iraq, Egypt and Nigeria desperately deserve $500,000 to help them rebuild their devastated churches, schools, homes, and lives at the brutal hands of Islamic jihadists, do they not?” the boycott call asks. “After all, these innocent Catholics weren’t breaking the law when the violent jihadis terrorized their land, destroyed their Churches and raped their women.”

Complicit Clergy is a laity-led initiative that was established last August in the wake of the Theodore McCarrick sex scandal with the mission of helping to foster a cleansing of the Church and establish a culture of accountability.

The website produced a video highlighting five bishops who spoke faithfully in defense of the Church at the USCCB meeting last November in Baltimore, and has published a Bishop Contact Directory to assist lay Catholics in voicing concerns to their bishops.

In April, Pope Francis sent $500,000 in Peter’s Pence funds to benefit migrants, specifically more than 75,000 people who arrived in Mexico in 2018 via six migrant caravans, according to Vatican News. The money was to be dispersed between 27 projects promoted by 16 Mexican dioceses and religious congregations, which had requested assistance in continuing to provide food, lodging, and basic necessities to the migrants.

A statement from Peter’s Pence cited a drop-off in media coverage on the caravans causing a drop in government and private donations for the migrants, and also lamented the fact the U.S. border was closed to the migrants.

“In recent months, thousands of migrants have arrived in Mexico, having travelled more than 4,000 kilometres on foot and with makeshift vehicles from Honduras, El Salvador and Guatemala,” it said. “Men and women, often with young children, flee poverty and violence, hoping for a better future in the United States. However, the US border remains closed to them.”

“All these people were stranded, unable to enter the United States, without a home or livelihood,” the statement said. “The Catholic Church hosts thousands of them in hotels within the dioceses or religious congregations, providing basic necessities, from housing to clothing.”

Last fall Honduran President Juan Orlando Hernández told Vice President Mike Pence some of the migrant caravans that have been marching for the U.S.-Mexico border were organized by Honduran “leftist groups” and “financed by Venezuela” with the intention of challenging U.S. sovereignty, Breitbart reports.

Furthermore, the outlet reported, Guatemalan head of intelligence Mario Duarte said in February that the caravans headed for the border are “well-planned” and “well-organized” by those seeking to “weaponize those in need.”

“This was not a spontaneous event,” Duarte said. “It was well-planned. It was well-organized.” He said that varying intelligence, law enforcement, and military agencies had obtained evidence that last October’s caravan from Honduras to the U.S. was not a grassroots effort, and rather had been organized in advance.

In its call to boycott the Peter’s Pence collection, Complicit Clergy pulled from a column at The Remnant written by attorney and child advocate Liz Yore.

Yore has reported on globalist billionaire George Soros and his efforts to negatively influence the Catholic Church via investments in leftist groups, and his worldwide push for open migration.

She questioned whether persecuted Christians across the world qualified for support from the Peter’s Pence collection.

This included Christians in Iraq, Egypt, and Nigeria persecuted by Islamic jihadists, the underground Catholic Church in China persecuted by the Communist government, the Catholic victims of suicide bombings by Islamic terrorists on Easter Sunday in Sri Lanka, and also the Catholic Church in the Middle East and Africa facing terrorism and persecution by Boko Haram and other Islamic terrorists.

“No, Francis is focusing on the Soros agenda, not the persecuted Catholics’ agenda,” Yore said. “Recall that this is the Pope who said, ‘If I speak of Islamic violence, I must speak of Catholic violence.’”

Francis made that comment while traveling back to Rome in 2016 when asked by a reporter about 85-year-old Fr. Jacques Hamel, the French priest who was murdered in July of that year by Islamic extremists while celebrating Mass. The reporter had asked the Pope why he never uses the word “Islam” when he speaks of terrorists.

Francis’ backing for immigration has been a central theme of his pontificate, and he has been vocal about what he sees as the importance of nations being more welcoming toward migrants, placing it on the par with abortion. He has condemned attempts to stem the tide of Muslim immigration into Europe time and again, even at the cost of national security.

After millions of mostly Muslim immigrants poured into Europe in 2017, Pope Francis called for “broader options for migrants and refugees to enter destination countries safely and legally.”

“The principle of the centrality of the human person … obliges us to always prioritize personal safety over national security,” Francis stated.

Reports have said he refuses to meet with Italy’s Minister of the Interior Matteo Salvini over Salvini’s tough stance against illegal immigration.

The pope has been critical of U.S. President Donald Trump over Trump’s support for the sovereignty of the U.S. and opposition to illegal immigration. Pope Francis has questioned Trump’s pro-life values, compared his proposed border wall to the Berlin Wall, and said, “He who builds a wall will become a prisoner of the wall he built.”

Pope Francis inferred during the U.S. presidential campaign that then-candidate Trump was not Christian because of his proposal to protect America by building a wall on its southern border.

“A person who only thinks about building walls, wherever they may be, and not building bridges, is not Christian,” he said at the time.

Yore and Complicit Clergy noted that Francis remains secure behind the 39-foot wall surrounding the Vatican, but is undermining American security by funding open borders through the Peter’s Pence collection.

“It is time to shut off the financial spigot to this Vatican scheme to undermine the safety, security and sovereignty of Europe and the United States,” they said.