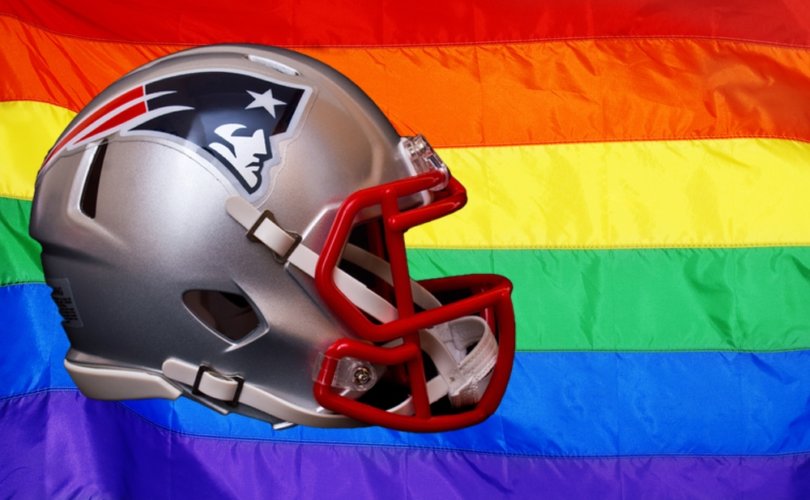 BOSTON, May 26, 2017 (LifeSiteNews) — The Super Bowl champion New England Patriots will sponsor this year’s ‘Gay Bowl’ in Boston. The LGBT Flag football event will be held in October and is expected to attract 40 teams from around North America for what the organizers call a “wicked good time!”

The annual ‘Gay Bowl’ seeks to “foster and augment the self-respect of all lesbian, gay, bisexual and transgender persons and to promote respect and understanding from the larger community,” states the National Gay Flag Football League, the event’s organizer, on its website.

In recent years the Patriots have led the way in sports teams that promote the normalization of homosexual relationships and behaviors.

In 2015 the Patriots was one of 379 large companies that signed onto a legal document (amicus brief) submitted to the United States Supreme Court in support of same-sex “marriage.” Later that year, the Supreme Court redefined marriage as applying to same-sex couples in the controversial Obergfell v Hodges case. The San Francisco Giants and Tampa Bay Rays also lent their support.

The Cardinal Newman Society at the time criticized the companies for supporting same-sex “marriage,” stating that redefining marriage “rejects the primacy of the family in American economy and society as well as the principles of American federalism.”

In 2014, Patriots owner Robert Kraft said he would be glad to have an openly homosexual player on his team, adding that the Patriots’ locker room would be a “most supportive” environment for an openly gay player.

According to Outsports’ Cyd Zeigler, it was Kraft who “was behind the Patriots’ support of the amicus brief.” Kraft “has not been shy about embracing the LGBT community,” having put in appearances at various functions for LGBT organizations, Zeigler added.

The Patriots’ support for the LGBT flag football ‘Gay Bowl’ began back in 2003 — when Boston previously hosted the event — when it sent former player Andre Tippet who officiated the tournament’s ceremonial coin toss.

Touchdown Wire blogger Michael Colangelo said that the Patriots are sending a clear message by sponsoring the ‘Gay Bowl.’

“The Patriots sponsoring Gay Bowl ’17 is a clear message of where they stand on LGBT issues. Every team is aware of who and what they associate their brand with. The Patriots are making a statement, whether they intend to or not,” he said.

And it’s not just the Patriots that are promoting homosexuality. The NFL has moved in the same direction as well.

During the Pro Bowl in Orlando earlier this year, the NFL used the “kiss cam” to zoom in on homosexual and lesbian couples so that they would kiss for the public to see. The event was turned into a homosexual propaganda video by Ad Council and has been viewed over 6 million times.

“Football season is over and the Super Bowl is behind us. But the NFL is trying to push homosexuality through a new pro same-sex ad,” he said at the time.

Graham criticized the video as “trying to define sin as love and make it acceptable.”

“This generation is being bombarded with an upside-down version of truth and love,” he added.

The ‘Gay Bowl” is hosted every Columbus Day Weekend in a different member city. The National Gay Flag Football League is an association of over 200 teams in 20 leagues across the United States and Canada.

Last year, more than 750 LGBT athletes and referees on 40 teams from 21 cities across the United States and Canada came to Washington, DC for ‘Gay Bowl XVI.’