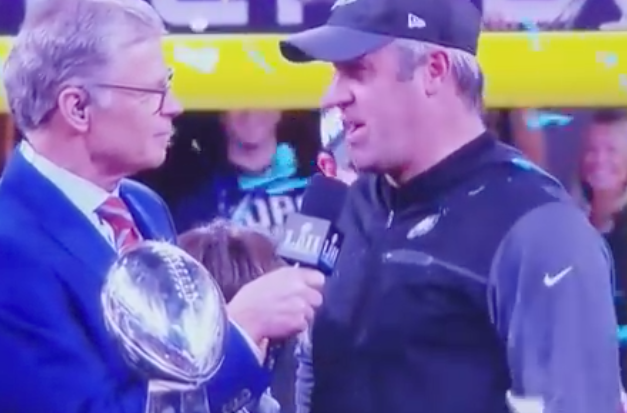 MINNEAPOLIS, MN, February 6, 2018 (LifeSiteNews) – Super Bowl champion coach Doug Pederson’s first reaction to winning it all was, “I can only give the praise to my Lord and Savior Jesus Christ.” Teammates echoed the same Christian spirit that has molded the Philadelphia Eagles into a unit despite season-long obstacles.

The Philadelphia Eagles upset the Super Bowl-defending New England Patriots 41-33 in a nail-biter Sunday night, taking the Lombardi Trophy home for the first time. Afterwards, Coach Pederson was full of praise for his team, and thanks to God.

“I can only give the praise to my Lord and Savior Jesus Christ for giving me this opportunity,” he said, adding, “and I’m going to tell you something: I’ve got the best players in the world.”

Coach Pederson also led the entire, kneeling team in The Lord’s Prayer in front of the cameras after the game.  ESPN, in its online video, deleted the prayer, keeping everything else.

Quarterback Nick Foles, the game MVP who passed for 373 yards and three touchdowns and became the only player in Super Bowl history to both throw a touchdown pass and catch one, simply said, “All glory to God.”

Foles is outspoken about his Christian faith, too.  He has begun seminary classes. After football, he wants to become “a pastor in a high school.”

“It’s on my heart,” he said, noting that high school is tough for many youth. “So much temptation in this world, so much going on with social media and the internet that you want to talk to them and address it, and share all the weaknesses I have because I’ve fallen many times,” he admitted. “You want to impact people’s hearts.”

“I’ve been blessed with an amazing platform and it’s just a door God has opened, but I still have a lot of school left and a long journey.”

Foles was the Eagles’ second-string quarterback, finishing the last three games of the season after starter Carson Wentz — who was doing so well he was the odds-on favorite for league MVP — injured his left knee in the end zone against the Los Angeles Rams in early December.

“Nick Foles told me last week in Philadelphia he thought the Lord had him here for just this time,” Tony Dungy, Christian former head coach of the Indianapolis Colts and the Tampa Bay Buccaneers, told NBC Sports. “He knows this is Carson Wentz’s team, but he was ready to go tonight, and he played like a champion.”

Wentz, an outspoken Christian as well, showed no sign of envy. “God is so good!” he tweeted after the win. “So proud of this team!!!! Told y’all my boy (Nick Foles) was gonna shine tonight! Well deserved my bro!”

God is so good!!!! World Champions!!!! So proud of this team!!!! Told y’all my boy @NFoles_9 was gonna shine tonight! Well deserved my bro! #AO1 #flyeaglesfly

Tight end Zach Ertz, who made the game-winning touchdown, took a back seat to praise. “Glory to God first and foremost.  We wouldn’t be here without Him,” he said, adding, “This team is amazing.”

Before the game, Ertz told reporters that following Jesus Christ and witnessing to others of His love is what he lives for. “Our number one goal on this earth is to make disciples (of Christ)… Football is just a platform that we have to draw people to Jesus.”

“I was able to prepare myself for this (Super Bowl) week because I’ve been in the Word for this past year, growing in my faith,” Ertz added. “Having teammates to push me each and every day…I’m able to be accountable to them…We’re never gonna let each other slip.”

Ertz noted he and his wife Julia grow in Christ together under his leadership.  “Being the head of the household, the foundation of our marriage is built on the Word.  Anytime you’re able to build something with that strong a foundation, you’re not going to be easily swayed.  So that’s what we strive for.”

Punter Donnie Jones’ trust in Christ kept him at an even keel in the midst of the most important game of his life and its accompanying media frenzy. “He’s going to take care of you,” the Catholic-schooled athlete said.  “You’ve got to have faith, believe.”

Every Saturday night, Jones attends Mass with fellow Catholic players and coaches. He and his wife Aubrie pray daily with their two children. “All of our blessings come from Him,” Jones told The Catholic Spirit.  “We (have) a lot of things to be thankful for.”

Offensive Coordinator Frank Reich, whose gutsy calls were repeatedly praised by play-by-play commentators, was a Christian pastor and seminary professor before joining the NFL.

And they put their money where their Faith is.  Defensive end Chris Long gave his first six game checks for scholarships so students in Charlottesville could go to college. He is donating the rest of the season game checks as seed money for his “Pledge 10 for Tomorrow” educational charity.  Wentz’ “Audience of One” foundation has donated half a million dollars for a sports exercise facility and Christian training complex in Haiti.

Sometimes personal faith spreads onto the practice field, with huddles ending in “One-Two-Three-JESUS!” When someone on the team converts to faith in Christ, baptisms are held wherever the team may be, in bathtubs or hotel pools. Some players chose Christian-themed shoes for the NFL’s “My Cleats, My Cause” charity promotion.

Members of the team even produced a video to tell the world that a common faith in Jesus Christ is “The Philadelphia Eagles Locker Room’s Binding Force.”

Owner Jeffrey Lurie inadvertently testified to the faith of players, saying the unique cohesiveness of the team is what made it great. “I’ve never seen an incredible group of men in all my years of life that come together with all the adversity and injuries and losing our franchise quarterback, and you’re world champs,” he said.

It was a long-awaited, cherished victory for one of the toughest sports towns. The last time Philly had a championship football team was 1960, before the Super Bowl was even played between the then-well established NFC and the upstart AFC.

They’re a tough, loyal team for tough, loyal fans.  The Eagles have sold out every home game since 1999.  A Sports Illustrated poll ranked Philly fans as the most intimidating in all of football.