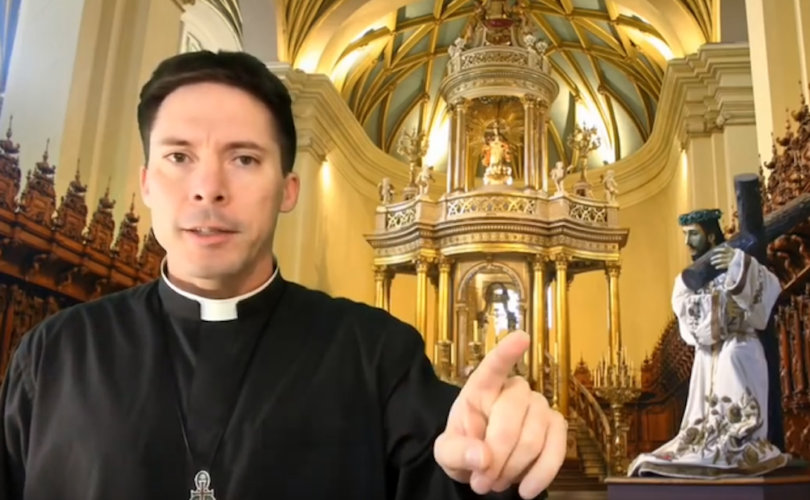 EDITOR'S NOTE: Father Goring's videos were taken down after LifeSiteNews published this story.

HOUSTON, Texas, January 8, 2019 (LifeSiteNews) — A Catholic priest told to stop speaking out about certain aspects of the Church’s sexual-abuse scandal issued an appeal to Pope Francis for permission to keep talking about the crisis.

Father Mark Goring, a member of the Companions of the Cross priestly community and director of the Catholic Charismatic Center in the Archdiocese of Galveston-Houston, was told by an unnamed superior to “cease and desist” last Friday. The instruction came after he had posted a YouTube video critical of embattled Cardinal Donald Wuerl, which stemmed from word that Wuerl would likely preside as normal over the archdiocese’s Youth Rally and Mass for Life during the upcoming March for Life.

Goring told viewers in the January 5 video he was asked a day earlier by one of his “legitimate authorities” to “cease and desist.”

His response was “immediate and unhesitant,” he said.

Goring exhorted viewers to remember that when he was ordained he promised before God to be obedient to his superiors. He said it was never his intention to make their lives difficult.

In his appeal to Pope Francis video posted January 8, Goring said again he was a man of obedience.

He explained the cease and desist had come via a phone call, though not specifying from whom, and he had not been told to remove any of his videos or prohibited from commenting on Church affairs.

Goring said, though, in the January 8 video, because of the cease and desist call, he made the assumption that it was time for him “to enter into the silence of St. Joseph.”

The Catholic Charismatic Center in Houston, where Father Goring is the director, is a mission of the Companions of the Cross, an Ottawa, Ontario-based Society of Apostolic Life focused on Christ crucified, spiritual life and evangelization. Goring is also a host for the Canadian Food for Life television ministry and has hosted a weekly Bible teaching program for Radio Maria in the United States.

As director of an apostolate operating within the Archdiocese of Galveston-Houston, just as with any religious community performing ministry inside a diocese, Goring is answerable to both his community superiors and the local ordinary.

LifeSiteNews sent inquiries to Father Goring, the Archdiocese of Galveston-Houston, and the Companions of the Cross but did not receive a response.

Goring posted in the comment section of the January 5 cease and desist video, “I am not available for comments. Please do not give up on Jesus. And do not give up on the Church which He established. Viva Cristo Rey!﻿”

Goring said in the follow-up January 8 video that he was glad to enter into the silence of St. Joseph.

“However, there’s that scripture from Jeremiah,” he said. “I feel like there’s a fire burning in my heart that I can’t contain.”

He cited St. Catherine of Siena saying, “We’ve had enough of exhortations to be silent. Cry out with a thousand tongues – I see the world is rotten because of silence.”

Goring recounted how he presented lots of video talks on silence, but he now found himself in a situation where he didn’t know what to do.

“I honestly don’t know what to do,” Goring said in the subsequent video posted Tuesday. “What I feel like doing is appealing to the pope.”

“And maybe I can do this over YouTube,” he said. “Can I do this? Can I ask, Holy Father, do I have your permission to continue to comment on the situation in the Church?”

“I give you my word that I’ll do my very best to comment on the situation with love,” he added. “I’ll try to not be critical or to let anger come in. I’ll try to be honest, as honest as I possibly can be.”

But Wuerl at Francis’ direction remains apostolic administrator of the archdiocese and thus would presumably preside over the archdiocese’s March for Life-related events next week, including the youth rally and Mass, along with the Vigil Mass for Life at the Basilica of the National Shrine of the Immaculate Conception.

Both events typically draw tens of thousands of pro-lifers, and Catholics are understandably incensed at the idea of Wuerl appearing at the pro-life events as though all is well with the sexual-abuse crisis continuing unresolved.

“It communicates the utmost disrespect for the victims of sexual abuse by clergy, that these cases are no big deal and that Church leaders can get away with allowing these situations to be swept under the rug,” Father Goring had said in the initial video, titled “Cardinal Wuerl, Get Out,” and reported on by Church Militant before being taken down from YouTube.

Some of the abuse situations are a mess, Goring told viewers in the most recent video appealing to the pope, with much occurring behind the scenes. He promised in the appeal to look into things as best he can before issuing comment.

“But because we don’t have the full information, does that mean I have to study this thing for five years before I can give a response?” Goring asked.

Goring told viewers not to worry about him.

“My decision to become a priest was a decision to follow Jesus, and I had no illusions,” said Goring in the appeal to Francis. “I was very much aware (of) where Jesus takes us – He takes us to the Passion, the cross and to die, so that we can resurrect to eternal life in Heaven.”

“All I care about is getting to heaven and doing God’s will,” he continued. “And I want to fight for the honor of Holy Mother Church.”

What grieves him most is the trouble created for his superiors, he said. Goring said he loves his superiors, listing his general superior and the bishops, and noting the local  archbishop (Cardinal Daniel DiNardo).

“However, I feel I need to speak,” he said. “So, my question is, Pope Francis, Holy Father, do I have your permission to continue to comment on the situation in the Church?”

Goring has been frank in defense of Church principles in his video commentary in the past. In one instance right before the end of the 2016 primary election season, he laid out in no uncertain terms both the accountability and civic responsibility for Catholics regarding their backing pro-abortion candidates in an election.

His appeal to Francis for permission to keep commenting on the abuse crisis came as the U.S. Bishops wrapped up a retreat they were directed to undertake by the pope to reflect on the abuse situation.

And it follows months of tension between the U.S. Bishops and Francis after the pope rebuffed their leadership’s request to intervene in the matter of disgraced former Cardinal Theodore McCarrick. The Vatican brusquely quashed their plans to address the abuse scandal within their purview in lieu of his meeting on some aspects of the abuse crisis with the presidents of the Church’s episcopal conferences next month.