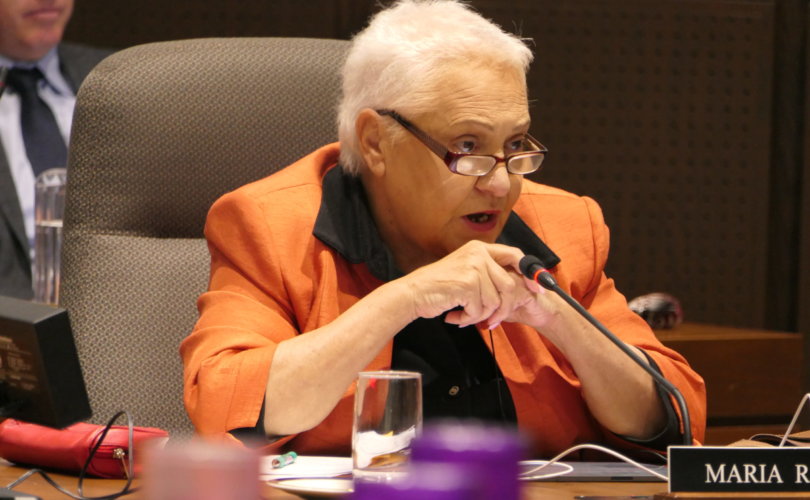 Toronto Catholic District School Board trustee Maria Rizzo cast the only dissenting vote on a motion to hire an independent investigator.

TORONTO, December 24, 2019 (LifeSiteNews) — Embattled Catholic trustee Michael Del Grande got a shot in the arm during a meeting his critics called two days before Christmas in an apparent bid to force him to apologize for his statement to LifeSiteNews calling gender ideology “evil.”

Toronto Catholic District School Board (TCDSB) trustee Markus de Domenico, who called the December 23 meeting, told the Toronto Star last week that he wanted the 12-member board to ask Del Grande to “withdraw those statements (to LifeSiteNews), apologize and repudiate the impressions that he’s given staff, students, families and trustees.”

However, de Domenico’s motion did not make it to the floor because proceedings were moved behind closed doors, for reasons that remain private.

Moreover, of seven delegations to the board before the private session, five supported Del Grande — although bylaws decree trustees’ names can’t be mentioned.

Trustees emerged after two hours of confidential deliberations to pass a motion by 11-1 — Maria Rizzo dissented —  to direct staff to hire an independent investigator “pursuant to obligations to investigate code of conduct complaints.”

The motion did not specify what complaints or trustees, reported the Toronto Star.

Del Grande has been under fire since he voted November 7, along with trustees Garry Tanuan, Nancy Crawford and Teresa Lubinsky, against including the terms “gender identity” and “gender expression,” as well as “family and marital status,” as prohibited grounds for discrimination in the Toronto Catholic District School Board code of conduct.

The change was approved by a majority of eight trustees.

Del Grande was initially criticized for his hyperbolic motion the night of the vote proposing trustees add other categories of sexual identities such as bestiality and pedophilia to the code  — a rhetorical device to illustrate the board was on a “slippery slope.”

His critics have since also excoriated his December 13 statement to LifeSite.

“I took a stand against gender ideology which is incompatible with the Christian anthropology of the human person,” wrote Del Grande.

“Each one of us cannot simply take the comfort of the pew on a Sunday, and say nothing or do nothing about the attacks on our faith taking place all around us.

Notably, Toronto Elementary Catholic Teachers union president Julie Altomare-Di Nunzio opposed Del Grande at Monday’s meeting, urging the board to do something about his comments because “words matter.”

Altomare-Di Nunzio said she spoke on behalf of her union’s members in response to a question from Rizzo.

Homosexual activist and former TCDSB student Kyle Iannuzzi also appeared to tell the board that “the code of conduct is not enough.

“To have folks speaking against the code of conduct or calling names included in the code of conduct ‘evil,’ the board needs to send a very clear message that they stand with the Ontario Human Rights Code,” and not with “those transphobic comments,” Iannuzzi said.

But Parents As First Educators member Queenie Yu pointed out that “nowhere” in Del Grande’s statement “does he single out any particular individual or group of people calling them evil. He was not making any personal attacks. He was talking about an ideology.”

People are “much more than an ideology to which they subscribe” and “(t)heir dignity as a human being is based on the fact that they are beloved children of God,” she told trustees.

“Similarly, the trustee may not agree with a certain ideology, but his personal opinion of that ideology and the Church’s teaching on it, does not change the dignity of the people who choose to adopt it,” Yu said.

Del Grande was exercising his right to free speech he enjoys in Canada’s democratic society, she added. “I’d like to encourage all trustees to continue speaking out and expressing their views.”

St. Timothy youth minister Chris Elliott, in a statement read by Lalit Lobo, described Del Grande as  “a rare breed in today’s politically correct and politically charged climate” and his statement to LifeSiteNew as “flawless in terms of its context and the faithfulness.”

Elliott’s statement created among the most contentious moments of the night, with trustee Ida Li Preti the first to interrupt on a point of order.

“This is borderline hate speech,” she said to Elliott’s contention that “something can rightly be called ‘evil’ if it causes harm for individuals or society, and from the Catholic point of view, transgender theory ideology does a great deal of harm to both.”

“I half agree with her,” said chair Joe Martino, at which point Del Grande made a point of order that the delegate “can recite Catholic … theology and I don’t know why he should be stopped.”

Lobo was allowed to continue, only to have de Domenico rise to interrupt to assert that he was re-debating the motion on gender identity and gender equality.

Retired Catholic school principal Lou Iacobelli’s defense of Catholic teaching was interrupted by Rizzo, who protested the debate over gender expression and gender ideology was off limits.

Iacobelli was also heckled by one of the 50 attendees for allegedly presenting “hate speech.”

Just before the four-hour meeting was adjourned, Rizzo contended it was “not acceptable” that trustees had not received the two legal opinions evidently discussed in private session until an hour before the meeting.

A staff member defended legal counsel, noting that board director Rory McGuckin was on holidays and 2,000 miles away when the special board meeting was called.