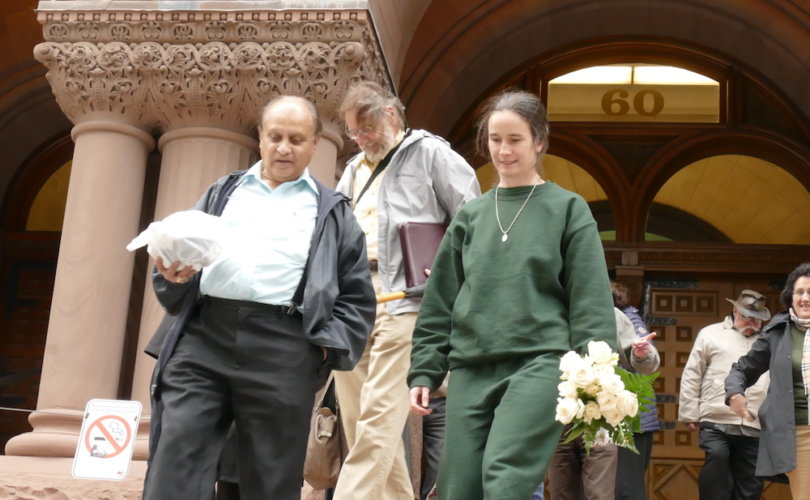 Mary Wagner, still in prison garb, walks down the steps of Old City Hall Court in April 2016 with some of her supporters after being freed following 135 days in jail for a previous arrest.Lianne Laurence / LifeSiteNews

MILTON, Ontario, February 21, 2017 (LifeSiteNews) — Mary Wagner spent her birthday locked up at the Vanier Centre for Women as a pro-life “prisoner of conscience.”

In December, Wagner was arrested after she entered the waiting room of the Bloor West Village Women’s Clinic in Toronto and quietly offered women a rose with a card that included information on abortion alternatives. She has been arrested on multiple occasions and spent 4 1/2 years in jail over the last 16 years for attempting to peacefully intervene to rescue unborn children.

February 12 was Wagner’s birthday and a group of faithful pro-lifers wanted to offer her hope and solidarity. They honoured her special day by going to the prison parking lot to pray for her, her mission, and a change of laws in Canada.

They did not want her to feel that “no one cares.”

Two members of the group had scheduled a visit with Mary inside the prison. Upon entering the meeting room through the glass, Mary’s face was all smiles while “Happy birthday” was sung through a telephone. She was delighted to know that there were people outside in prayer and acknowledged receipt of several birthday cards, some as far away as Poland.

Ironically, she is a “pro-life hero” in Poland yet largely ignored in her home country of Canada.

Mary, even through the glass, appeared to be abounding in peace and joy. One immediately sensed her connection with God.

Asked about the possibility of taking her case to the higher courts and even the Supreme Court, Mary asked not to put trust in the court system, which is itself broken, but to trust in God and in His power to end abortion.

Upon mentioning to her that the pro-life movement needs to be unified in its calling, Mary offered a reminder that everyone is already are united under God. There just needs to be “one voice” for God.

She encouraged all pro-lifers to remain committed to defending the unborn in any way and not to be indifferent or lazy but to promote life daily.

A recitation of the Divine Mercy Chaplet was cut short when the guard entered to escort her back to the cell. There was a sad look on her face that brought the group to tears.

It was hard to see her being taken away because she does not belong there. May her willingness to suffer hardship and personal deprivation provide strength and inspiration for others.

After the visit, the group discerned that more prayer vigils near the prison need to take place. In this way, it shows trust in God and witnesses His truth to others.

The plan is to organize a prayer vigil once a month and get the word out for others to join.

Jolanta Galazka is the president of 40 Days for Life Mississauga.