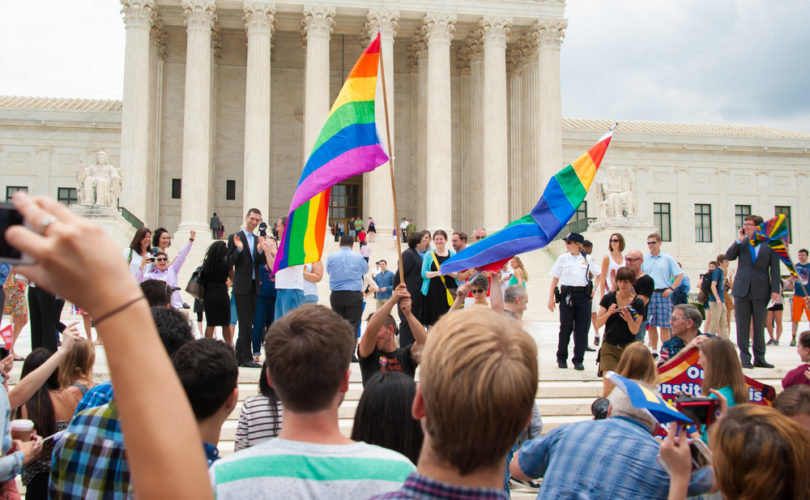 The lesbians, who had never called themselves married, ended their relationship in 2011. The petitioner, dubbed “V.L.,” filed for joint custody for “E.L.”'s 13-year-old and 11-year-old twins. The two women had chosen to have children via artificial insemination from an anonymous donor.

The Alabama Supreme Court, led by Chief Justice Roy Moore, had ruled 7 to 1 against “V.L.,” refusing to recognize the 2007 Georgia gay adoption because the Georgia court did not have jurisdiction to issue the adoption order in the first place. “Georgia law makes no provision for a non-spouse to adopt a child without first terminating the parental rights of the current parents,” the Alabama Supreme Court explained.

Alabama Supreme Court Justice Tom Parker concurred, stating, “The state has a legitimate interest in encouraging that children be adopted into the optimal family structure, i.e., one with both a father and a mother.”

Alabama Chief Justice Roy Moore had written in a previous case, “The homosexual conduct of a parent” is “sufficient justification for denying that parent custody of his or her own children or prohibiting the adoption of the children of others.”

Lawyers for “E.L.” arguing against joint custody explained that the Georgia adoption was not legitimate because the lesbians had only pretended to live in Georgia, which has a six-month residency requirement for adoptions.

The U.S. Supreme Court overruled Alabama without hearing oral arguments, saying the state had to recognize the adoption because a Georgia court had recognized it. State courts are constitutionally obligated to give “full faith and credit” to “the public acts, records and judicial proceedings of every other state.”

“V.L.” said she is overjoyed: “The Supreme Court has done what's right for my family.”

To whom do children belong? How same-sex marriage threatens parental rights