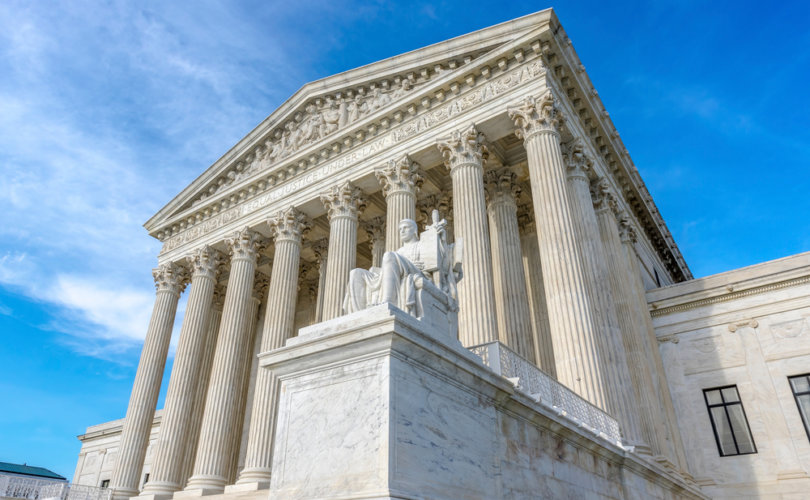 (LifeSiteNews) — The fate of the Biden administration’s sprawling COVID jab mandate for large private businesses may soon be determined by the U.S. Supreme Court after numerous groups filed a deluge of appeals asking the Court to block enforcement of the rule, which was given the go-ahead by the U.S. Court of Appeals for the Sixth Circuit on Friday.

Supreme Court Justice Brett Kavanaugh, a Trump-appointee, has asked the Biden administration to respond to the appeals by 4 p.m. on December 30, just days before the requirement is set to take effect on January 4, 2022.

Fox News reported that “[t]he appeals went to Kavanaugh because of geography — he oversees emergency appeals from the Sixth Circuit.”

The Supreme Court is not set to rule on the validity of the Biden administration’s controversial jab mandate, but will instead simply decide whether or not to halt enforcement of the rule while lower courts hash out its merits.

If allowed by the Court to proceed, the mandate would force businesses with 100 or more employees to “develop, implement, and enforce a mandatory COVID-19 vaccination policy” or require workers to “undergo regular COVID-19 testing and wear a face covering at work in lieu of vaccination.”

The rule would penalize noncompliant businesses with fines ranging from over $13,000 to more than $136,000 for repeat violations, while workers who refuse to comply would face termination. The U.S. Department of Labor has also suggested it may consider expanding the requirement to include businesses with fewer than 100 employees.

The escalation of the matter to the Supreme Court comes after the Sixth Circuit Court on Friday dissolved a stay which had been placed on the mandate by the Fifth Circuit Court last month.

The Sixth Circuit Court had agreed to hear consolidated challenges to the requirement after the U.S. Appeals Court for the Fifth Circuit decided to stall the rule just two days after it was published.

In its 2-1 decision late Friday night, a three-judge panel on the Sixth Circuit Court lifted the prior court’s stay, ruling the Occupational Safety and Health Administration (OSHA) could move ahead with the Biden administration’s sweeping mandate.

“Recognizing that the ‘old normal’ is not going to return, employers and employees have sought new models for a workplace that will protect the safety and health of employees who earn their living there,” the court stated in its decision, authored by Obama-appointed Circuit Judge Jane B. Stranch.

Immediately after the ruling a bevy of business groups, religious organizations, and others filed appeals asking the Supreme Court to take up the case, including conservative media outfit The Daily Wire, which was among the first businesses to file a lawsuit challenging the mandate.

The Daily Wire has since announced that it is taking its lawsuit against the Biden administration to the Supreme Court, calling the decision by the federal appeals court to allow enforcement of the rule “a brutal setback in the fight for bodily autonomy, privacy, and Constitutional order.”

“Today, the Daily Wire is appealing to the Supreme Court of the United States,” Daily Wire CEO Jeremy Boreing said in a statement Tuesday.

Boreing said the Daily Wire is “confident in our cause,” having the “rule of law,” “the science,” and “the best and most moral arguments on our side.”

“If the Supreme Court will hear our case, we will win,” he said. “If they won’t, it won’t just be a loss for us at The Daily Wire, but for all Americans.”

Economically, conservative thinkers have expressed concern that the Biden administration’s divisive mandate could cause severe labor shortages and economic fallout in a nation already struggling to re-emerge from an artificial recession amid skyrocketing inflation.