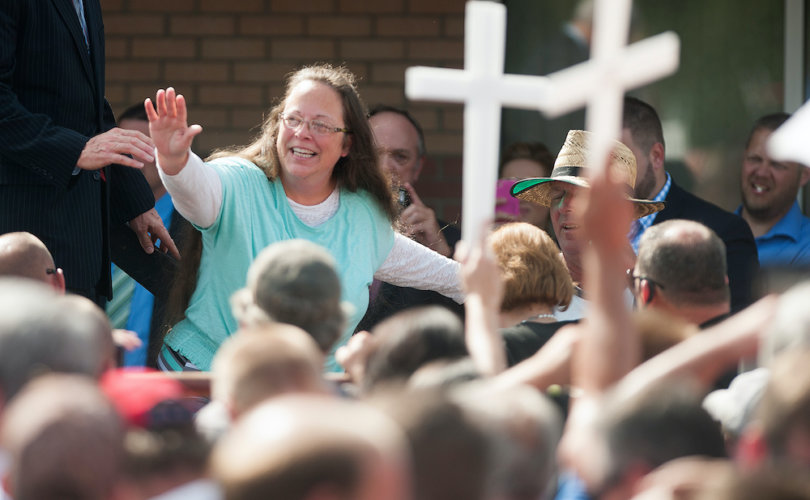 “Thomas says that petition ‘provides a stark reminder of the consequences of Obergefell’ v. Hodges, recognizing right to same-sex marriage, & says that the Court has created a problem that only it can fix. Until then, Obergefell will continue to have ‘ruinous consequences,’” reported Howe.

Thomas says that petition “provides a stark reminder of the consequences of Obergefell” v. Hodges, recognizing right to same-sex marriage, & says that “the Court has created a problem that only it can fix. Until then, Obergefell will continue to have 'ruinous consequences.'” https://t.co/MkscbAWisu

Justice Clarence Thomas, joined by Justice Samuel Alito, penned a four-page statement that one unhappy court observer described as “a jaw-dropping rant taking direct aim at Obergefell and suggesting that SCOTUS must overturn the right to marriage equality in order to protect free exercise.”

Thomas’s statement is a searing criticism of the Court’s Obergefell ruling, which imposed same-sex “marriage” across the country, denying states the ability to maintain the definition of marriage as between one man and one woman.

“By choosing to privilege a novel constitutional right over the religious liberty interests explicitly protected in the First Amendment, and by doing so undemocratically, the Court has created a problem that only it can fix,” declared Thomas at the conclusion of his statement.  “Until then, Obergefell will continue to have ‘ruinous consequences for religious liberty.’”

Thomas’s statement recounted Davis’s plight in 2015, calling her one of the first conscience victims of Obergefell:

As a result of this Court’s alteration of the Constitution, Davis found herself faced with a choice between her religious beliefs and her job. When she chose to follow her faith, and without any statutory protection of her religious beliefs, she was sued almost immediately for violating the constitutional rights of same-sex couples.

Davis may have been one of the first victims of this Court’s cavalier treatment of religion in its Obergefell decision, but she will not be the last. Due to Obergefell, those with sincerely held religious beliefs concerning marriage will find it increasingly difficult to participate in society without running afoul of Obergefell and its effect on other antidiscrimination laws.

“Moreover, Obergefell enables courts and governments to brand religious adherents who believe that marriage is between one man and one woman as bigots,” continued Thomas, noting that “one member of the Sixth Circuit panel in this case described Davis’ sincerely held religious beliefs as ‘anti-homosexual animus.’”

The immediate responses from Supreme Court observers seem to concur that Justice Thomas is calling for the Supreme Court to overturn Obergefell.