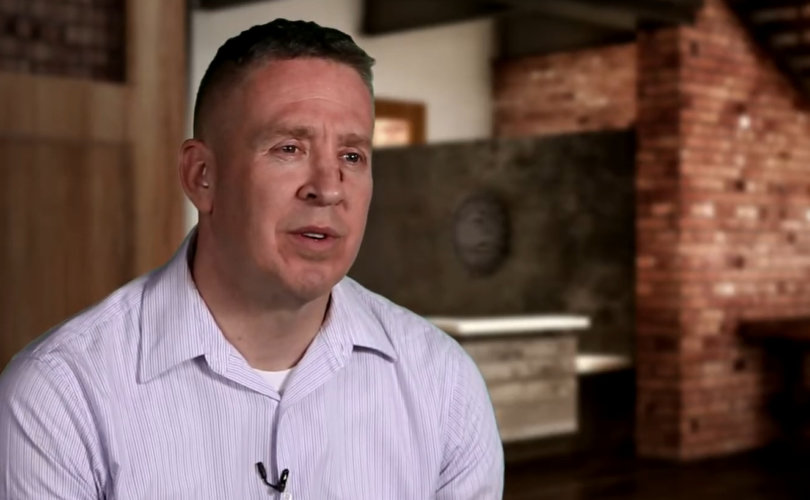 (LifeSiteNews) — The Supreme Court on Monday heard the case of former coach Joe Kennedy, who was fired by Washington’s Bremerton School District in 2015 after he silently prayed on a school field after a football game.

What appeared to be sympathetic statements during the two-hour hearing by justices of the Supreme Court’s conservative majority indicate the court may side with Kennedy in its decision, anticipated by the end of June.

Paul D. Clement, Kennedy’s lawyer, opened the session with a constitutional defense of the coach’s prayer, explaining, “When Coach Kennedy took a knee midfield after games to say a prayer of thanks, his expression was entirely his own. That private religious expression is doubly protected by the free exercise and free speech clauses.”

Clement told the Court he believes the decision “not only violated the First Amendment” but “ignored a veritable wall” of Supreme Court “precedents that make clear that a school does not endorse private religious speech just because it fails to censor it.”

While Kennedy was eventually joined in prayer by students, and he had begun making religious references in motivational speeches to his players, he prayed on the field without issue for seven years. It wasn’t until a coach of an opposing team told Bremerton High School’s principal that Kennedy had asked the coach’s players to join in a postgame prayer, adding that he “thought it was pretty cool” the district would allow such activity, that the district launched an investigation into Kennedy’s compliance with the school board’s religious policy, CBS News reported.

“While acknowledging that Kennedy had “not actively encouraged, or required, participation” in either a pregame prayer in the locker room or his “inspirational talk at midfield” after games,” the district said in a September 17, 2015 letter that he was likely violating the First Amendment’s Establishment Clause and was exposing the district to “significant risk of liability,” according to CBS News.

After the school district told Kennedy his prayer may not have participation from students, he sent a letter from his attorney, Hiram Sasser, to the district informing them he would “resume his practice of saying a private, postgame prayer at the 50-yard line, since such speech, Sasser argued on his behalf, would be protected by both the Free Speech Clause and the Free Exercise Clause of the Constitution.

At subsequent games, Kennedy “waited until players were singing their fight song” after their games, and knelt at the 50-yard line to pray with a bowed head, where he was “joined by players from both teams, members of the media and the public.” He was thereafter placed on administrative leave by the school district, which cited a “failure to follow district policy.”

Kennedy filed suit against the Bremerton School District in August 2016 but was ruled against in several successive court decisions. U.S. District Judge Ronald Leighton argued in March 2020 that public schools “have the ability to prevent a coach from praying at the center of the football field immediately after games.”

Judge Milan Smith Jr., part of a three-judge panel of the 9th Circuit, also found in March 2021 that Kennedy was not conducting a “private exercise of faith” but was taking part in a “demonstration necessarily directed at students and the attending public.”

During Monday’s Supreme Court hearing, Clement argued that the 9th circuit “fails to grasp a basic teaching of this court’s cases” that “is simple enough even for young students to understand: That the government does not endorse all private religious speech just because it takes place on the school side of the gates.”

Several Supreme Court justices appeared to lean toward alignment with Clement’s arguments on behalf of Kennedy. Justice Samuel Alito, for example, asserted his belief that Kennedy was fired for “unlawful” reasons, and Justice Amy Coney Barrett suggested Kennedy’s speech was private and protected by the First Amendment, according to Forbes.

Justice Neil Gorsuch reportedly asked the school district attorney what the court should do if it “thought the school district misunderstood the Establishment Clause teachings of this court” or came up with new reasons for Kennedy’s termination after the decision was made.

Justice Sonia Sotomayor appeared to echo prior arguments of the 9th circuit that Kennedy’s prayer was problematic because it was “demonstrative,” emphasizing the fact that Kennedy had prayed at midfield, where his prayer was on display.

Commenting on his drawn-out legal battle, Kennedy said, “I was a Marine for 20 years. Supporting and defending the Constitution means a lot to me. Giving up is not something that’s in my blood, it’s not in my nature. I can look at myself in the mirror, look at my team over the years, and hold my head up high and look them in the eyes and say, hey, I fought the good fight, I didn’t give up.”