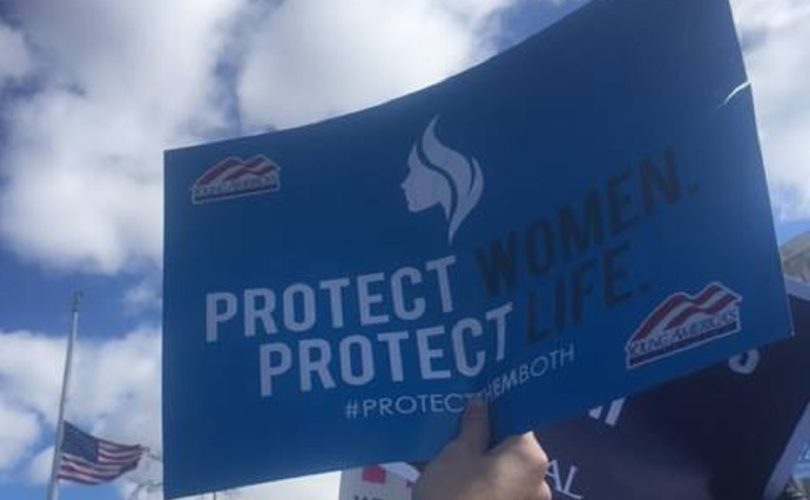 Texas passed a requirement that abortionists have admitting privileges at a hospital within 30 miles of their clinic and passed a law requiring that all abortion businesses have standards of cleanliness and safety that at least equal the standards of other surgical facilities.

Whole Woman's Health, which operates seven abortion mills in Texas, challenged the laws. Wisconsin, Louisiana, and Alabama have similar pro-life laws, and the high court's decision will directly impact those states. But the principle at stake is how much states can regulate abortion without infringing upon the right to abortion.

The Supreme Court in its 1992 Casey decision ruled that states can restrict abortion but cannot create an “undue burden” on the mother. A pro-life law, the court said, will be struck down if it creates, or is intended to create, a “substantial obstacle” to seeking an abortion.

First, Stephanie Toti of the Center for Reproductive Rights in New York City argued against the pro-life laws, stating, “They are unnecessary health regulations that create substantial obstacles to abortion access.” She was asked for specific evidence proving her claim that the pro-life laws directly caused the closure of half of the state's abortion businesses, and she cited the timing related to the laws passing and the clinics' closing.

Justice Alito challenged Toti's claim that the pro-life laws directly caused clinic closures. “There's information that they closed for reasons that had nothing to do with this law,” the justice said.

The pro-abortion argument is that the pro-life laws do not ensure women's health, but rather “would delay or prevent thousands of women from obtaining abortions and lead some to resort to unsafe or illegal methods of ending an unwanted pregnancy.”

Toti argued that pro-life laws must have a “permissible purpose” and that the court should not take the state's word about the purpose of the laws to ensure women's safety. She said the laws are medically unnecessary. She emphasized that the pro-life laws cause clinics to close, creating travel distances in rural Texas that are an “undue burden” for women seeking abortion.

Toti was given five extra minutes, at the request of Jufstice Ginsburg, and then another several minutes as Justice Sotomayor requested more time to emphasize that a medical abortion is a two-day procedure.

Next, Obama administration solicitor general Donald Verrilli argued against the Texas pro-life laws, saying they create an “undue burden” on Texas mothers seeking abortions and are medically unnecessary. “This law closes most abortion facilities in the state, puts extreme stress on the few facilities that remain open, and exponentially increases the obstacles confronting women who seek abortions in the state.”

Justice Alito challenged Verrilli's claim that the surgical facility requirement is unnecessary. “I read through these regulations[.] … They have to do with basic safety[.] … The entrances to the clinic have to be at grade level. You have to have an elevator. The corridors have to be wide enough so that you could bring in a stretcher if somebody has to be taken to the hospital.”

Verrilli argued that all the clinic closures were because of the pro-life laws, and that if the laws were enforced, the few remaining abortion businesses would not have the capacity to commit the number of abortions women in Texas want.

Justice Alito challenged the capacity argument, stating that evidence was not included in the case, so “we don't really know what the capacity of these” clinics is.

Justice Kennedy openly mused about sending the case back to lower courts so capacity answers could be entered into evidence.

Texas solicitor general Scott Keller then spoke in favor of the pro-life laws and was given extra minutes equal to Toti's time. He argued that the laws make abortion safer. He also explained figures that show that the clinics remaining open, along with two within a mile or so of the Texas border, have the capacity to handle the large number of abortions for mothers in the state who want one.

Requiring admitting privileges “ensures doctors are qualified, promotes continuity of care in the case of complications that require hospitalization, and reduces communications errors and delays when a patient must be treated at a hospital.” Keller noted that even the opposition admit that abortion patients need hospitalization at least 210 times each year.

Keller explained that the laws were passed in light of abortionist Kermit Gosnell's 2011 conviction for criminal negligence and murder in Philadelphia.

The abortionists argued that the pro-life laws caused half of the state's abortion businesses to close (22 of 41). Keller countered that Whole Woman's Health failed to show that the laws were the only cause of all the closures, noting that five abortion mills closed before the laws took effect.

In interviews with providers, Reuters found that in some cases, a number of factors were in play when clinics closed down, such as funding cuts. Keller called the abortionists' argument “revisionist history.”

Justice Kennedy speculated that the pro-life laws could lead more women to have more abortions through surgery by forcing them to wait.

The American Medical Association and the American College of Obstetricians and Gynecologists filed a brief saying the pro-life laws “do nothing to protect the health and safety of women,” because early medical abortions rarely result in complications. “No law requires colonoscopies or liposuction to be performed in an ambulatory surgical center or hospital, and the mortality of both procedures is higher than abortion,” they said.

The American Civil Liberties Union also filed an amicus brief on the abortionists' side.

Actress Amy Brenneman and other women filed several abortion-supporting briefs, saying their abortions allowed them to control their bodies and plan for the future.

With one fewer justice since the death of Antonin Scalia, the court could deadlock 4-4 if Justice Kennedy sides with the pro-lifers. Such a tie would mean that the laws remain in effect in Texas.

Dozens of pro-life groups rallied outside the court, chanting, “Pro-life! Pro-woman!” and listening to speakers.

The justices will cast at least a preliminary vote on the case when they assemble on Friday morning for a private conference.

Center for Reproductive Rights (CRR) president Nancy Northup commented, “We are confident the court will recognize that these laws are a sham and stop these political attacks on women's rights, dignity, and access to safe, legal, essential health care.”

The decision is expected in June, as the race for president intensifies.