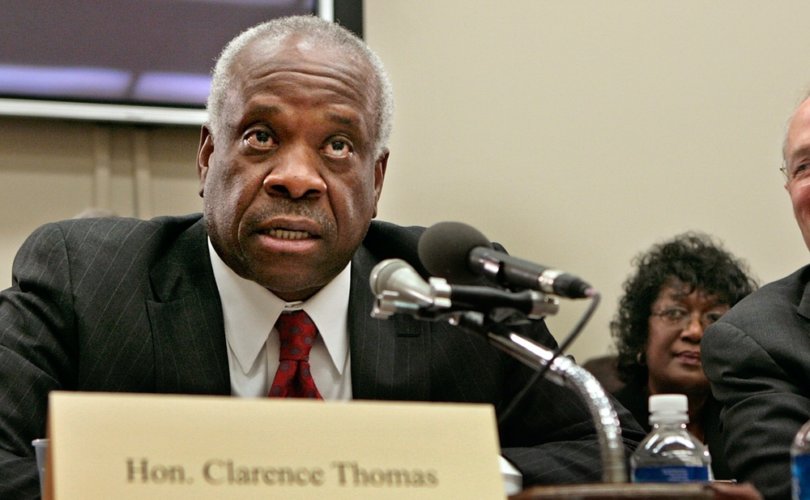 WASHINGTON, D.C., June 30, 2020 (LifeSiteNews) — Supreme Court Justice Clarence Thomas has condemned U.S. abortion law and called for Roe v. Wade, the 1973 decision imposing abortion on demand across the country, and “its progeny” to be overruled as irreconcilable with the Constitution.

Thomas made the comments during his dissenting opinion given during yesterday’s June Medical Services v. Russo ruling striking down a Louisiana law requiring basic medical precautions in the event of abortion complications.

“[W]e exceed our constitutional authority whenever we ‘appl[y] demonstrably erroneous precedent instead of the relevant law’s text,’” Thomas concluded.

“Because we can reconcile neither Roe nor its progeny with the text of our Constitution, those decisions should be overruled,” he stated.

Thomas said that the challenge to the Louisiana law should have been rejected for the simple fact that the abortionists in question had no legal standing to bring it in the first place. “Today a majority of the Court perpetuates its ill-founded abortion jurisprudence by enjoining a perfectly legitimate state law and doing so without jurisdiction,” he wrote.

Thomas said that the case had been brought by “abortionists and abortion clinics” whose sole claim was that Louisiana’s law “violated the purported substantive due process right of a woman to abort her unborn child.”

“But they concede that this right does not belong to them, and they seek to vindicate no private rights of their own. Under a proper understanding of Article III, these plaintiffs lack standing to invoke our jurisdiction,” he stated.

Thomas rejected the claim of Chief Justice John Roberts that according to the legal doctrine of stare decisis precedents set by previous Supreme Court rulings in similar cases required the Louisiana law to be overturned, but insisted that the justices should have rejected the challenge to the state law because it violated the Constitution.

“The Constitution does not constrain the States’ ability to regulate or even prohibit abortion,” he wrote.

“Moreover,” Thomas added, “the fact that no five Justices can agree on the proper interpretation of our precedents today evinces that our abortion jurisprudence remains in a state of utter entropy.”

Thomas has previously taken aim at the contemporary understanding of stare decisis (the concept that the longer a ruling stands, the greater weight it accrues as legal precedent) which is also the chief theory sustaining Roe v. Wade.

In his assenting opinion given in Gamble v. United States last year, a case not directly to abortion, Thomas took the opportunity to discuss that legal concept.

“In my view, the Court’s typical formulation of the stare decisis standard does not comport with our judicial duty under Article III because it elevates demonstrably erroneous decisions—meaning decisions outside the realm of permissible interpretation—over the text of the Constitution and other duly enacted federal law,” Thomas wrote.

Criticising current U.S. abortion law in general in his opinion given yesterday, Thomas said that the Supreme Court had “created the right to abortion based on an amorphous, unwritten right to privacy, which it grounded in the 'legal fiction' of substantive due process.”

“Roe is grievously wrong for many reasons,” he continued, “but the most fundamental is that its core holding—that the Constitution protects a woman’s right to abort her unborn child—finds no support in the text of the Fourteenth Amendment.”

Thomas said that ”the idea that the Framers of the Fourteenth Amendment understood the Due Process Clause to protect a right to abortion is farcical.”

“Roe suggests that the Due Process Clause’s reference to ‘liberty’ could provide a textual basis for its novel privacy right,” he continued.

“But that Clause does not guarantee liberty qua liberty. Rather, it expressly contemplates the deprivation of liberty and requires only that such deprivations occur through ‘due process of law.’”

Citing the eighteenth century Irish statesman and philosopher Edmund Burke, Thomas said that “no one could seriously claim” that “revolutionary” pro-abortion Supreme Court rulings “are part of the ‘inheritance from our forefathers,’ fidelity to which demonstrates ‘reverence to antiquity’.”

Earlier this year Thomas referred to Roe v. Wade as one of many “incorrect decisions” in relation to the Fourteenth Amendment and in the same context of “incorrect decisions,” also mentioned the 2015 ruling Obergefell v. Hodges, which guaranteed a “right” to homosexual “marriage.”