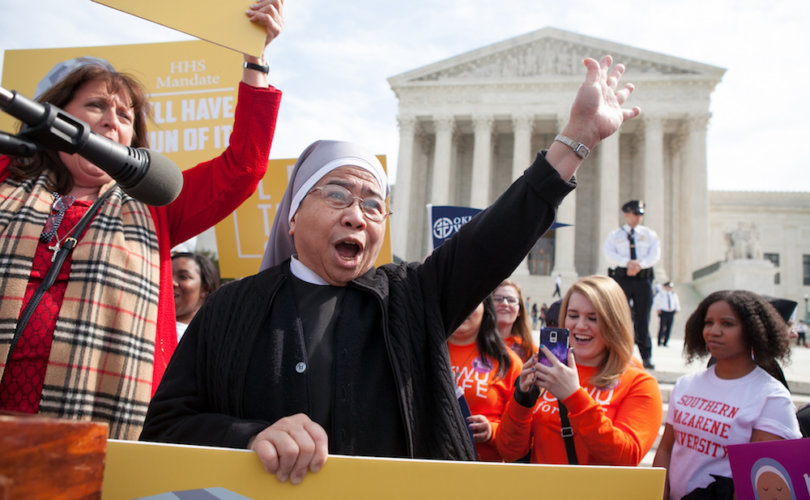 WASHINGTON, D.C., March 30, 2016 (LifeSiteNews) – The U.S. Supreme Court may be looking for a solution that leaves the HHS mandate in place while exempting religious non-profits from any participation in the process.

Yesterday afternoon, justices asked both sides of the Zubik v. Burwell case to submit additional legal briefs detailing “how contraceptive coverage may be obtained by petitioners’ employees through petitioners’ insurance companies, but in a way that does not require any involvement of petitioners.”

Under a regulation written by the Obama administration, all employers are required to provide their female employees with contraceptives, sterilization, and potentially abortion-inducing drugs with no co-pay. Houses of worship are exempted but non-church religious organizations, like the Little Sisters of the Poor, must file a paper opting out of the system. Their insurers must then offer women birth control for free.

During oral arguments last Wednesday Paul Clement, an attorney for the religious objectors, told justices that amounts to the government trying “to hijack our health plans.”

He argued that the HHS mandate violates the 1993 Religious Freedom Restoration Act (RFRA), because providing birth control to women is not a compelling government interest and the HHS mandate is not the “least restrictive” means available.

Attorneys for the religious plaintiffs arguing against the HHS mandate say the move shows, not only do they have a chance to win the case, but they may be able to craft their own outcome.

“This is an excellent development. Clearly the Supreme Court understood the Sisters' concern that the government's current scheme forces them to violate their religion,” said Mark Rienzi, lead attorney for the Becket Fund for Religious Liberty. “We look forward to offering alternatives that protect the Little Sisters' religious liberty while allowing the government to meet its stated goals.”

The current arrangement does not work, their legal brief states, because signing the opt-out form triggers the coverage of contraception, which the Roman Catholic Church considers a mortal sin, and the process involves the Sisters' participation in evil.

Evangelical Protestants also object to many of the required forms of contraception, which have the potential to act as abortifacients.

“The government is forcing our clients to offer access to abortion-inducing drugs through their insurance plans,” said David Cortman, senior counsel at the Alliance Defending Freedom, which is representing plaintiffs in two of the cases. “There is an easy solution: The government can offer these services to women who want them without forcing Christian schools, nuns, and priests to abandon their belief that life is sacred. We will confer with our clients to determine a response to the Supreme Court’s request.”

The attorneys will have to submit two rounds of legal briefs: the first must be submitted by April 12, then a reply to the other side's brief is due by April 20.

The request may signal that justices are looking for a way to avoid a 4-4 deadlock brought about by the absence of Justice Antonin Scalia.

“We see this as a positive development,” said Fr. Frank Pavone of Priests for Life, which filed one of those cases. “The Court appears to be looking for a least restrictive alternative that would not burden our religious beliefs, which will ultimately mean that the government did not satisfy its burden under Religious Freedom Restoration Act.”

Before his death, the High Court combined seven pending cases challenging the mandate into a single case.

If the justices tie, it would leave a competing patchwork of lower court decisions in place, making the present system operative in some areas but not others.

Of the nine U.S. appeals courts that heard cases related to the system, only the Eight Circuit Court of Appeals ruled in favor of the religious petitioners.