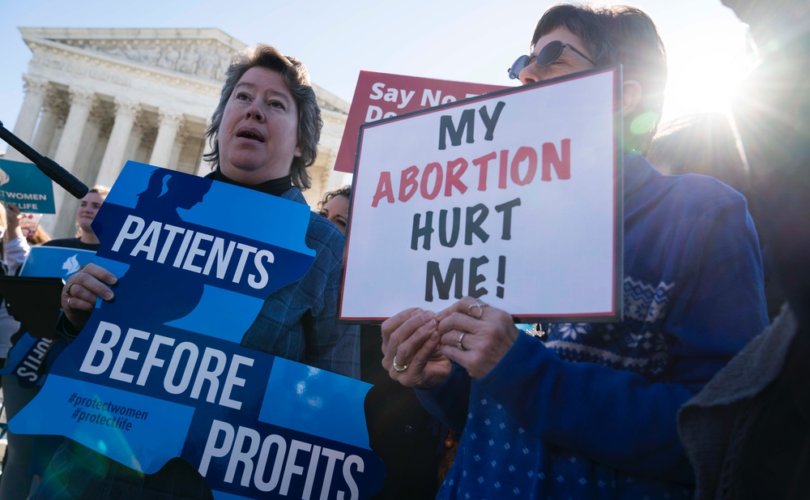 WASHINGTON, D.C., March 4, 2020 (LifeSiteNews) – Oral arguments before the U.S. Supreme Court began Wednesday over a Louisiana law imposing medical standards on abortion facilities, a case that could have drastic ramifications for the states’ ability to restrict or regulate abortion.

June Medical Services LLC v. Russo concerns Louisiana’s requirement that abortion centers make arrangements for admitting women to nearby hospitals in cases of life-threatening complications. The abortion industry’s attorneys argue the law is no different from the Texas law the Supreme Court struck down in 2016’s Whole Woman’s Health v. Hellerstedt. Pro-lifers argue that not only was Hellerstedt wrongly decided but that Louisiana’s situation is different from that of Texas anyway, including that most Louisiana hospitals don’t have the Texas requirement that doctors must see a minimum number of patients per year to qualify for admitting privileges.

“This case is about respect for the court’s precedent,” said abortion industry attorney Julie Rikelman, SCOTUSblog reports. She argued that the Louisiana law was “expressly modeled on” the judicially-invalidated Texas law, and “nothing has changed” since that ruling “that would justify such a legal about-face.”

Deputy U.S. Solicitor General Jeffrey Wall, who was defending the law, sparred with Justices Ruth Bader Ginsburg and Elena Kagan. He rejected Ginsburg’s contention that the requirement that admitting hospitals be within 30 miles served no medical purpose, noting that all such standards must factor in geography. He also told Kagan that the plaintiffs “ought to have put their applications where their mouths are,” but instead sued to invalidate the law before even trying to obtain admitting privileges.

Today’s oral arguments also revealed that “Doe #3,” an abortionist, was able to gain admitting privileges at a Catholic hospital in Shreveport.

Chief Justice John Roberts and Justice Brett Kavanaugh inquired as to practical aspects of the case, namely whether it hinged on factual inquiries that could vary state-by-state, or if whether the law can truly be understood has carrying an “undue burden” if abortionists can still obtain admitting privileges under it. Those lines of questioning could hint at those judges ultimately voting to uphold the law, albeit in a limited way that does not affect the broader legal questions of abortion.

The case is likely to at the very least impact the Hellerstedt precedent, which has been used to invalidate a broad range of modest abortion regulations as “undue burdens” on women. It remains to be seen whether the court takes the opportunity to make a broader determination on the underlying legitimacy of Roe v. Wade or Planned Parenthood v. Casey, which force all 50 states to permit most abortions. In January, more than 200 members of Congress signed a brief urging the court to use the case as an occasion to reconsider Roe.

Family Research Council President Tony Perkins, who was in the courtroom during oral arguments, said he felt “optimistic” that “the Court will affirm the right of states to provide oversight and regulation of abortion clinics, treating them like every other outpatient surgery center.”

“The Court should also take the opportunity to clarify that abortionists cannot truly represent the interests of women when contesting health and safety requirements designed to protect those same people,” he said.

“For too long, abortionists have flouted the law and derided health standards for women seeking abortion,” Perkins continued. “As a Louisiana legislator, I authored some of the first abortion clinic regulations in the country to stop abortion clinics from operating in filthy, disgusting conditions. These facilities are still performing abortion on women in unsanitary conditions and then falsifying records to cover up their malpractice. They must be stopped.”

Roe is largely defended not on its legal merits (numerous pro-abortion legal minds, including Ginsburg herself, have acknowledged the ruling’s flaws), but on its status as precedent, with the contemporary interpretation of the stare decisis doctrine holding that Roe’s lengthy history staying on the books grants it added weight. Justice Clarence Thomas has forcefully rejected such arguments; it remains to be seen how Roberts or President Trump’s two SCOTUS appointees, Kavanaugh and Neil Gorsuch, will weigh Roe’s precedent versus its substance.