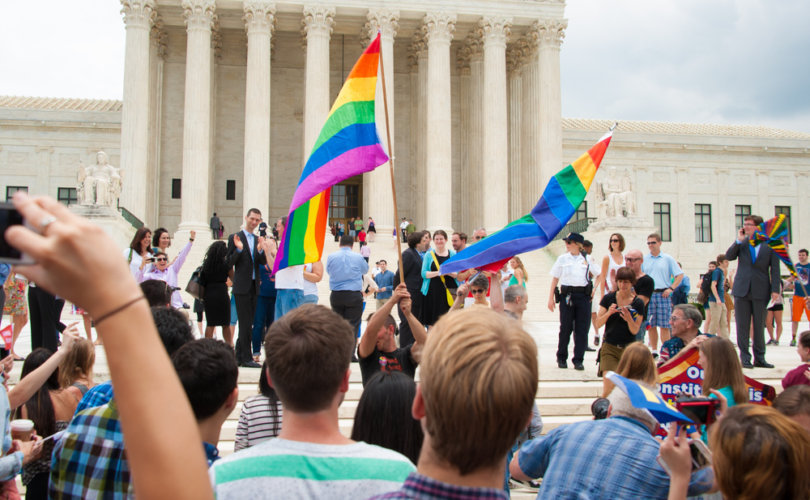 LOUISVILLE, Kentucky, May 19, 2016 (LifeSiteNews) – The homosexual plaintiffs behind the Supreme Court case legalizing gay “marriage” across the U.S. are claiming discrimination after a Catholic cemetery declined their headstone design because it conflicted with Church teaching.

“It's pretty clear when you read the letter that this is a clear case of LGBT discrimination,” said Greg Bourke, one-half of the same-sex Louisville, KY, couple named as plaintiffs in Obergefell v. Hodges.

Bourke and Michael De Leon held a press conference Wednesday outside St. Michael Cemetery to claim the Archdiocese of Louisville was discriminating against them for its rejection of the tombstone, local NBC affiliate WAVE-3 reports. Bourke says the archdiocese was getting a pass on showing prejudice against the men because of religious protection in anti-discrimination law.

“We wanted to see if there might be any kind of a legal challenge that we can make,” Bourke stated. “Honestly there are legal protection laws, there's an exclusion in the fairness ordinance that protect religious organizations, so that they have a license to discriminate.”

Bourke and De Leon’s proposed headstone design blatantly revels in the Obergefell decision redefining marriage, sporting an image of the Supreme Court building beneath a pair of intertwined wedding rings between their two last names. Below the image of the high court building, their first names and middle initials, along with space for their respective dates of death are divided by a cross.

The homosexual publication The Advocate reprinted part of a March 30 letter the men had received from Javier Rajardo, executive director of Catholic Cemeteries for the Louisville archdiocese, informing them that their marker design was at odds with Church teaching and therefore not appropriate for a Catholic cemetery.

“Having reviewed your proposed gravestone inscription please note we can approve your shared stone with both your names and dates of birth and of course the religious symbol of the cross,” it read. “Inscriptions on grave markers are permitted so long as they do not conflict with any teachings of the Church. Your proposed markings are not in keeping with this requirement.”

Bourke said at Wednesday’s “Freedom to Bury” press conference the men were told that new guidelines for memorials were being developed for same sex couples, yet Archdiocese of Louisville Chief Communication Officer Cecelia Hart Price told LifeSiteNews the Cemeteries office has had an approval process for all markers dating back many years.

The archdiocese also provided the following statement to LifeSiteNews:

A Catholic cemetery is a place that serves the faithful and witnesses to the Good News of Jesus Christ and the hope we share in the resurrection.  This ministry of the sacred rite of burial is offered to the Catholic community and all of God’s people. To this end, it is a place where the signs and symbols of our Catholic faith are displayed with pride and reverence.

In this case, the judgment was made that the depiction presented was not in keeping with Church teaching about marriage.  Mr. Bourke and Mr. De Leon are welcome to present another headstone design for approval.

Bourke and De Leon, longtime attendees of Our Lady of Lourdes Parish in Louisville, were named the 2015 “persons of the year” by the dissenting National Catholic Reporter publication for the men’s role in undercutting marriage, which lauded “their faithful public witness as gay Catholics.”

Denial of the headstone design celebrating homosexual “marriage” garnered pushback from LGBT activists, with the Human Rights Campaign (HRC) calling it a “narrow and hurtful decision by the Archdiocese.”

The Advocate piece said the men were “accustomed to discrimination within the Catholic Church,” citing Bourke having been asked to resign as a Boy Scout troop leader at his parish in 2012 after announcing his sexual orientation.

Despite the Boy Scouts of America lifting its restriction on openly gay adult leaders last year, religiously-affiliated troops can continue to choose leaders in accord with their beliefs, and the Our Lady of Lourdes troop denied his application to rejoin.

Bourke had indicated at the time he would make a public fuss to Louisville Archbishop Joseph Kurtz for the rejection.

“Clearly we have to draw attention to the Archdiocese,” Bourke stated, “and specifically Archbishop Joseph Kurtz for making this decision, which was really unnecessary and I think quite mean-spirited.”

He created a Change.org petition telling the archbishop, “End your unnecessary ban on Boy Scout leaders and re-approve my membership,” and also criticized the prelate for affirming Church teaching that individuals experiencing same-sex attraction must remain chaste.

The Catholic League defended the Louisville archdiocese for upholding Catholic morals in its cemetery policy.

“The First Amendment ensures the free exercise of religion, and if that means anything, it means the right of religious institutions to determine their own strictures,” the group’s President Bill Donohue said in a statement. “That would include the right to deny those who seek to politicize Catholic graveyards.”

“These men are not interested in tolerance, they want to impose their secular views on the Catholic Church,” Donohue said. “Hopefully, this contrived exercise in victimhood will open the eyes of those Americans who fail to distinguish between ordinary gays and militant gay activists. It is the latter, along with their heterosexual allies, who are seeking to sexually engineer our society—not even bathrooms and showers are off-limits—practicing intolerance in the name of ‘rights.’”