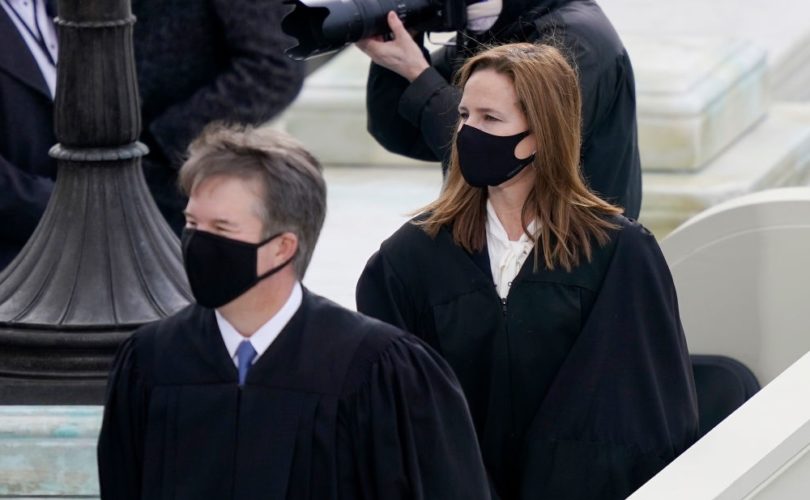 Health workers represented by the Thomas More Society argued that the mandate violated federal anti-discrimination laws by refusing to grant any religious exemptions to the order, as well as the Supremacy Clause of the U.S. Constitution, which holds that federal laws supersede state laws.

The nation’s highest court rejected a request to intervene Monday on a 6-3 vote, with only established conservative Justices Clarence Thomas and Samuel Alito and Trump-appointed Justice Neil Gorsuch voting to grant the application. None of the judges in the majority explained themselves, but Gorsuch took them to task in a lengthy dissenting opinion.

“In this case, no one seriously disputes that, absent relief, the applicants will suffer an irreparable injury,” Gorsuch wrote. “Not only does New York threaten to have them fired and strip them of unemployment benefits … The Free Exercise Clause protects not only the right to hold unpopular religious beliefs inwardly and secretly. It protects the right to live out those beliefs publicly in ‘the performance of (or abstention from) physical acts.’”

‘Today, we do not just fail the applicants. We fail ourselves,” he went on. “It is among our Nation’s proudest boasts that, ‘[i]f there is any fixed star in our constitutional constellation, it is that no official, high or petty, can prescribe what shall be orthodox in [matters of] religion’ … we should know the costs that come when this Court stands silent as majorities invade the constitutional rights of the unpopular and unorthodox.”

“Six weeks ago, this Court refused relief in a case involving Maine’s healthcare workers,” Gorsuch lamented in his closing paragraph. “Today, the Court repeats the mistake by turning away New York’s doctors and nurses. We do all this even though the State’s executive decree clearly interferes with the free exercise of religion — and does so seemingly based on nothing more than fear and anger at those who harbor unpopular religious beliefs … how many more reminders do we need that ‘the Constitution is not to be obeyed or disobeyed as the circumstances of a particular crisis … may suggest’?

The ruling is yet another ill omen for conservative Americans’ hopes that the Supreme Court had been “transformed” by former President Donald Trump’s three appointees during his term.

Despite some narrow victories for pro-life regulations, religious liberty, and other conservative causes, the current Supreme Court (often mischaracterized by both sides as a “conservative majority”) has also made a number of liberal decisions, most notoriously Gorsuch’s 2020 majority opinion redefining “sex discrimination” in Title VII of the 1964 Civil Rights Act to add sexual orientation and gender identity to its meaning (Kavanaugh voted with conservatives in that case, and Barrett was not yet on the court).

While Gorsuch has generally ruled more conservatively since then, Barrett and/or Kavanaugh have previously been the deciding votes against the Supreme Court taking up reviews of COVID-19 vaccine mandates in Maine and Indiana, transgender restroom “accommodation” in Virginia, Title X funding of the abortion industry, a Catholic hospital’s right to refuse gender “transition” procedures, and Christian business owners’ right to refuse participation in same-sex ceremonies.

This trend has compelled Gorsuch and Alito to take the unusual step of criticizing their colleagues for lacking the “fortitude” to resolve such issues and being “unwilling to … bear” the criticism that taking a stand would elicit.

Pro-lifers walked away feeling more cautiously optimistic about Kavanaugh and Barrett following their questioning of pro-abortion attorneys over Mississippi’s 15-week abortion ban, but their decisions on the New York mandate underscore how uncertain the outcomes of such cases remain.