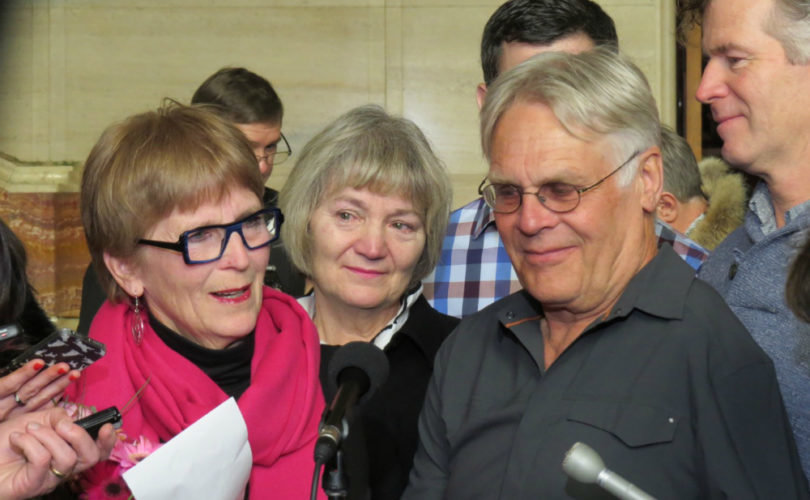 Plaintiffs Lee Carter (L) and Hollis Johnson (R), who traveled with Kay Carter for her suicide in Switzerland, rejoice in the Supreme Court's decision.Pete Baklinski / LifeSiteNews

OTTAWA, February 6, 2015 (LifeSiteNews.com) — Canada’s life and family leaders have strongly condemned the country’s high court ruling this morning that nullified the country’s law against assisted suicide and allowed “physician-assisted death” under what critics are calling a wide criteria.

The Council of Canadians with Disabilities (CCD) criticized the judgment for “creat[ing] the potential for the most permissive and least restrictive criteria for assisted suicide in the world, putting persons with disabilities at serious risk.”

“The Court did not impose a requirement of terminal illness, as is required in the states of Washington and Oregon. The judgment permits assisted suicide on the basis of psychological suffering. This places people with serious mental and emotional disabilities at risk, as well as people who have not yet come to grips with their disability,” the group stated.

The CCD said that the ruling’s second criteria of “intolerable suffering” is “completely subjective and will make it difficult to review decisions of doctors like Dr. Kevorkian who felt the existence of a disability was intolerable.”

Archbishop Richard Smith of Edmonton said he was “deeply disappointed” with the ruling. “We believe the current provisions in the Criminal Code prohibiting assisted suicide and euthanasia have served Canadians well, by protecting all persons, including those who are most vulnerable in our society,” he said. The law can “only respect the inherent dignity of each Canadian life if it acknowledges that no one has the right to take action that would intentionally end another’s life.”

In Carter v. Canada, the Court overturned a previous law prohibiting assisted suicide, in effect reversing the previous 1993 Rodriguez decision in which it said the state’s obligation to “protect the vulnerable” outweighed the rights of the individual to self-determination.

The court unanimously decided that prohibitions against assisted-suicide “unjustifiably infringe” a person’s right to life, liberty, and security of the person. The court ruled that a “physical-assisted death” must be made available to any “competent adult person” who “consents to the termination of life” and has a “grievous and irremediable medical condition (including an illness, disease or disability) that causes enduring suffering that is intolerable to the individual in the circumstances of his or her condition.”

Justice Minister Peter MacKay responded to LifeSiteNews’ request for comment with the following statement: “This is a sensitive issue for many Canadians, with deeply held beliefs on both sides. We will study the decision and ensure all perspectives on this difficult issue are heard.”

Campaign Life Coalition has condemned the decision saying that giving people the “legal right to kill others in whatever state of life they are in is something Canadians must never support.”

The organization is urging Parliament to “invoke the notwithstanding clause contained in Section 33 of the Canadian Charter of Rights and Freedoms and/or to enact a law that protects vulnerable Canadians from assisted suicide.”

“The Supreme Court of Canada will now accept that a doctor can kill instead of care for patients whose lives have become difficult and vulnerable due to age, illness or disability,” she said, adding that the decision “will teach this generation and generations to come that some lives are not worth living, that killing patients can be a medical option, and that death at the hand of a doctor is somehow a human right.”

She told LifeSiteNews that the notion the Charter has 'evolved' since Rodreguez to allow for assisted suicide is a “poor excuse that plays into the ideology of moral relativism.”

“The reality of what it means to be human cannot evolve, and the principles of the Charter should indeed recognize that fact.  The act of killing another person must always be a rubicon that we never cross, because the value of human life is inherent.  Crossing that rubicon and allowing some people to kill others turns the inherent value of human life into something that is subjective and circumstantial, to be determined at whim.  Clearly this is a terrible and dangerous precedent,” she said.

“The Supreme Court is naïve to think that assisted suicide will not be abused, when abuse already occurs.”

“This same issue was raised in Parliament on nine occasions since 1993, and has been the subject of six separate votes – all of which upheld the law against assisted suicide. These decisions were made with the support of all the political parties.”

“But the Supreme Court of Canada does not seem at all concerned about the opinion of a democratically elected Parliament, which supposedly represents the views of the population.  The Judges clearly believe that they know better which is in the best interests of the public,” she said.

“Today’s decision on physician assisted suicide is obviously not based on law and precedent, but is based on the personal opinion of the Supreme Court Judges. This is indisputable, owing to the fact that if the Court had based its decision on the law, it would have reached the opposite conclusion on assisted suicide since this same Court set a precedent in 1993 in the Sue Rodriguez case in which it upheld the law prohibiting assisted suicide.”

Landolt said the decision means that Canadians are now the “prey of and vulnerable to the idiosyncratic personal views of the nine appointed judges on the Supreme Court. We live in troubling times.”

The Institute of Marriage and Family Canada said the “individual right” to death will inevitably “harm families” and “have profound family and community effects.” It said evidence points to the eligibility for death eventually expanding so that a “suicide creep” will happen in Canada.

Mark Penninga, executive director of the Association for Reformed Political Action (ARPA), said that with the ruling a “sacred line has been crossed.”

“It will be logically impossible for Parliament or any legislature or court to enact safeguards that will be able to withstand future legal challenges. As we see in Belgium and the Netherlands, it is only a matter of time before these so-called safeguards are considered an unjust limitation on someone else’s rights, even allowing children or those who are depressed to be killed at the hands of the state,”  he said.

ARPA is also encouraging the federal government to make use of the “notwithstanding clause,” saying that there is “no role more important for the civil government than the protection of human life.”