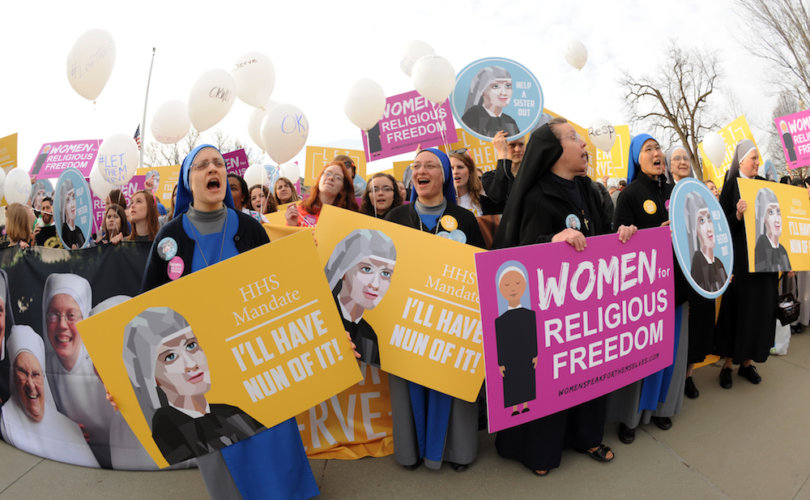 WASHINGTON, D.C., May 16, 2016 (LifeSiteNews) – Pro-life groups opposing the Obama administration’s HHS mandate are encouraged by today’s Supreme Court decision, and representatives of the Little Sisters of the Poor are even declaring it an initial victory.

The Supreme Court’s decision today remands the HHS contraceptive mandate case back to the lower courts.

“This is a game-changer,” stated Mark Rienzi, senior counsel at The Becket Fund for Religious Liberty, which represents the Little Sisters of the Poor and several other plaintiffs. “The Court has accepted the government’s concession that it can get drugs to people without using the Little Sisters.”

The leader for the Little Sisters of the Poor expressed again that the nuns’ main objective is to serve the poor in accord with their Catholic beliefs.

“All we have ever wanted to do is serve the neediest among us as if they were Christ himself,” said Sister Loraine Marie Maguire, Mother Provincial for the Little Sisters. “We look forward to serving the elderly poor for another 175 years to come.”

The national director of Priests for Life, a plaintiff in the case, said the Supreme Court’s decision sending the matter back to the lower courts was not ruling on the merits of the arguments of those opposing the HHS Mandate.

“We are studying the implications of this development, and are encouraged by it,” Father Frank Pavone said. “We have indicated to the Supreme Court, in answer to its recent questions, that there is a way for the government to pursue its objectives without burdening our freedom of religion. We are ready to present these new arguments in the Court of Appeals, and are just as confident as before of the strength of our position.”

Alliance Defending Freedom (ADF), which had several cases consolidated into the Zubik case, said the Supreme Court’s decision demonstrates that religious entities have the right to operate in a manner consistent with their religious convictions without government interference.

“Religious organizations have the freedom to peacefully operate according to their beliefs without fear of severe penalties by the government,” senior counsel David Cortman stated. “The Supreme Court was right to protect the Christian colleges and other groups from having to pay fines or fill out forms authorizing the objectionable coverage.”

“The government has many other ways to ensure women are able to obtain these drugs without forcing people of faith to participate in acts that violate their deepest convictions,” Cortman continued. “We look forward to addressing the remaining details as we advance these cases in the lower courts.”

“Today’s decision implicitly recognizes that the Obama Administration does not need to violate the First Amendment and hijack the health insurance plans of pro-life Americans to push life-ending drugs,” said Clarke D. Forsythe, Acting President and Senior Counsel of Americans United for Life (AUL), which had filed dozens of amicus briefs against the Mandate.

AUL noted the Court had acknowledged that the federal government has finally conceded that it has other options “besides its current scheme that hijacks the healthcare plans of nuns and priests.”

“The Obama Administration does not need to violate the First Amendment and hijack the health insurance plans of pro-life Americans to push life-ending drugs,” Forsythe stated. “It is disgraceful that the Administration has spent years trying to bully the Little Sisters of the Poor, Priests for Life, and the other plaintiffs in these cases, to force compliance with an anti-life agenda. Under the directives of the Supreme Court’s decision today, the lower courts should put a stop to this unconstitutional and unconscionable scheme.”

The CEO of the Eternal Word Global Catholic Network, Michael Warsaw, concurred that the Supreme Court’s decision affirmed the Obama Administration had other means of dispensing contraceptives than by compelling religious non-profits to do so via healthcare plans.

“Today’s U.S. Supreme Court ruling reversing the decisions of four federal appellate courts on the HHS Mandate is a clear victory for EWTN and all of the plaintiffs who have spent the last several years fighting against the government’s attempt to hijack our employer-sponsored health care plans in order to force us to provide contraception, abortion-inducing drugs and sterilization procedures,” Warsaw stated. “The Supreme Court has now said what we have been saying throughout our challenge of the Mandate, that the government does indeed have less restrictive means to accomplish its goals without forcing religious organizations like EWTN and the Little Sisters of the Poor to violate our strongly held moral beliefs or face crushing fines.”

“The government itself was forced to admit this as part of its case before the Supreme Court,” Warsaw said.

“Religious liberty and rights of conscience have been attacked like never before under President Obama,” said SBA List President Marjorie Dannenfelser. “Fortunately, today the Supreme Court took a step towards scaling back those attacks.”

“We are thankful the Supreme Court has protected religious nonprofits like the Little Sisters of the Poor from either having to violate their consciences by providing abortion-inducing drugs and devices or else face crippling fines,” she stated. “The Court has affirmed religious liberty as a foundational American value and we hope to see the lower courts do the same.”

“Although we welcome the court’s action today,” Dannenfelser added, “this lengthy and expensive litigation only underscores the dangers of the Affordable Care Act and other actions by the state and federal governments that tread on profound issues of conscience.”

Catholic League President Bill Donohue said it would have been ideal for the high court to have affirmed the religious liberty interests in the case, but the ruling suggests that a less restrictive accommodation would be coming, likely affording greater religious liberty protections than otherwise expected.

“Many alternatives will be forthcoming,” Donohue said, “but all should allow Catholic non-profits to remain one step removed from sanctioning morally offensive healthcare procedures.”

Donohue also pointed out the larger issue still to be addressed, stating, “The federal government has no legal or moral right to decide that a Catholic institution is not legitimately Catholic if it employs and/or services a large number of non-Catholics.”

The case’s namesake, Pittsburgh Bishop David Zubik, who has been vocal about opposing the HHS Mandate, praised today’s action by the Supreme Court.

Also weighing in was The Catholic Association, which advocates for religious liberty, life and the Catholic Church.

“Today the Supreme Court made it clear that the government still has not done enough to accommodate the conscience rights of the Little Sisters, whose plan they have tried to hijack for things like abortion pills,” Ashley McGuire, senior fellow for the group said. “For now, this is an interim win for the nuns, who just want to get back to their work caring for the poor without interference from government bureaucrats.”

1
Dr. Robert Malone: Endless mRNA jabs are in the works as the CDC and FDA play ‘hide the data’
2
Open letter to Elizabeth Warren: Why do you campaign so strongly for the murder of the unborn?
3
REPLAY: LifeSite’s 25th Anniversary Gala
4
Why is Pierre Poilievre silent on the family policies that matter to conservatives?
5
Residents of Texas city successfully quash pro-LGBT ‘diversity, equity, inclusion’ gov’t proposals
Subscribe to Daily Headlines »