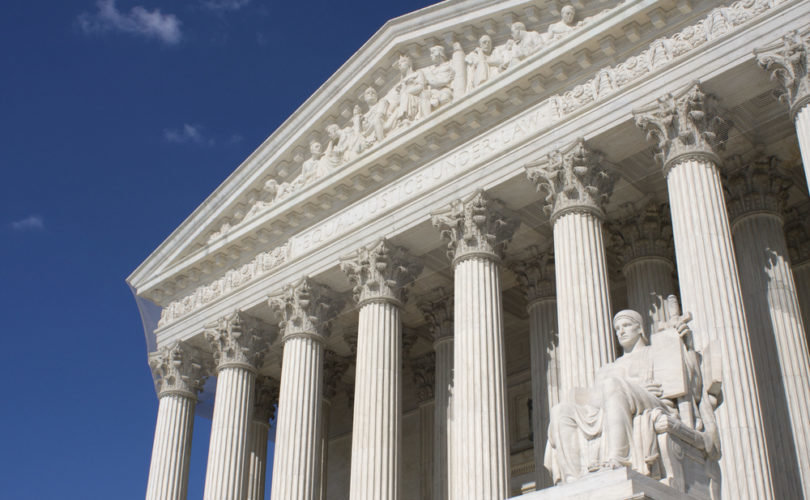 “I object to you calling these people protesters,” Justice Scalia said earlier this year. “It’s a counseling case, not a protest case.”shutterstock.com

That assessment came as part of their unanimous ruling striking down a Massachusetts law forbidding pro-life speech within 35 feet of abortion facilities' entrances.

The Obama administration joined the state in arguing that the law was necessary to protect the safety of women and was comparable to laws requiring protesters to keep a certain distance from funerals, political conventions, or other venues. The justices disagreed.

“Petitioners are not protestors,” they wrote. “They seek not merely to express their opposition to abortion, but to inform women of various alternatives and to provide help in pursuing them.”

The lead plaintiff, Eleanor “McCullen and the other petitioners consider it essential to maintain a caring demeanor, a calm tone of voice, and direct eye contact during these exchanges,” the justices said. “Such interactions, petitioners believe, are a much more effective means of dissuading women from having abortions than confrontational methods such as shouting or brandishing signs, which in petitioners’ view tend only to antagonize their intended audience.”

“In unrefuted testimony, petitioners say they have collectively persuaded hundreds of women to forgo abortions,” they added.

The justices, including outspoken abortion advocate Ruth Bader Ginsburg, wrote unanimously that sidewalk counselors “believe that they can accomplish this objective only through personal, caring, consensual conversations. And for good reason: It is easier to ignore a strained voice or a waving hand than a direct greeting or an outstretched arm.”

The ruling echoed statements made by Justice Antonin Scalia during oral arguments earlier this year. “I object to you calling these people protesters,” Scalia said. “It’s a counseling case, not a protest case.”

“These people don't want to protest abortion,” he said. “They want to talk to women who are about to get abortions and try to talk them out of it.”

The justices agreed American citizens have the right to do just that.

“Today’s ruling means I can offer loving help to a woman who wants it, and neither of us will go to jail for the discussion,” Eleanor McCullen, the lead plaintiff, said in a statement released through her lawyer. “I am delighted and thankful to God that the court has protected my right to engage in kind, hopeful discussions with women who feel they have nowhere else to turn.”

Those who train sidewalk counselors emphasize love, compassion, and empathy when dealing with anyone – either the woman considering the abortion or abortion providers. David Bereit of 40 Days for Life told young people at the Canadian March for Life last year, “Your peaceful loving presence out there flies in the face of all the stereotypes they want to throw onto us.”

Eric Scheidler, executive director of the Pro-Life Action League, called the decision “a great vindication of sidewalk counseling. The justices in the majority recognize that our compassionate pro-life outreach to mothers outside abortion clinics deserves the protection of the First Amendment.”

Their gentle assessment contrasts with the portrayal of such counselors as red-faced demonstrators often found in the media and in pro-abortion commentary. In an article on McCullen v. Coakley, the National Organization for Women wrote, “There can be no other way to describe in a single word what anti-abortion protesters have engaged in for four decades and that is terrorism.”

In February, Cosmopolitan magazine published an article entitled, “6 Women on Their Terrifying, Infuriating Encounters With Abortion Clinic Protesters.” One woman, whose aunt is an abortion escort, alleged that pro-life counselors threw doll parts at her as she went to abort a child she conceived while on the long-acting contraceptive Depo Provera. Another said her post-traumatic stress disorder diagnosis a year after her abortion came, not from the abortion, but from the protesters.

Not one of the half-dozen stories provided any evidence of their stories in the form of photographs or corroborating testimony.

The same month abortion escort Michelle Colon told The Huffington Post that mostly white sidewalk counselors in Jackson, Mississippi, “say some of the most disgusting, degrading, and racist comments to” black women considering abortion, telling them they may be “killing the dream, killing the next Barack Obama, the next Martin Luther King.”

The justices found little reason to believe an ordinance was necessary to protect abortion facilities or their employees from the threat of violence. Captain William B. Evans of the Boston Police Department had “testified that his officers had made 'no more than five or so arrests' at the Planned Parenthood clinic in Boston” under the 2000 law establishing a smaller bubble zone, “and that what few prosecutions had been brought were unsuccessful,” they wrote.

They added that the pro-abortion defendants could “identify not a single prosecution brought under those laws within at least the last 17 years.”

Nonetheless, Center for American Progress Director of Women’s Health and Rights Donna Barry said, “Unfortunately, health care providers and their staff in Massachusetts will again have to be concerned about their safety and have greater fear going to and from work.” Pro-abortion blogger Amanda Marcotte wrote in Slate that “there is plenty of reason to be worried” the decision “will embolden clinic harassers to start upping their games.”

While the High Court found little evidence that “buffer zones” prevented violence, they hinder the effectiveness of the pro-life message and increase the number of abortions.

The justices said in their opinion that “[a]lthough McCullen claims that she has persuaded about 80 women not to terminate their pregnancies since the 2007 amendment…she also says that she reaches 'far fewer people' than she did before the amendment.”

The National Abortion Federation found that 75 percent of abortion facilities that barred pro-life speech from some perimeter around its premises “said it helped improve patients’ and staff members’ ability to access the clinic,” according to the left-wing blog Think Progress.