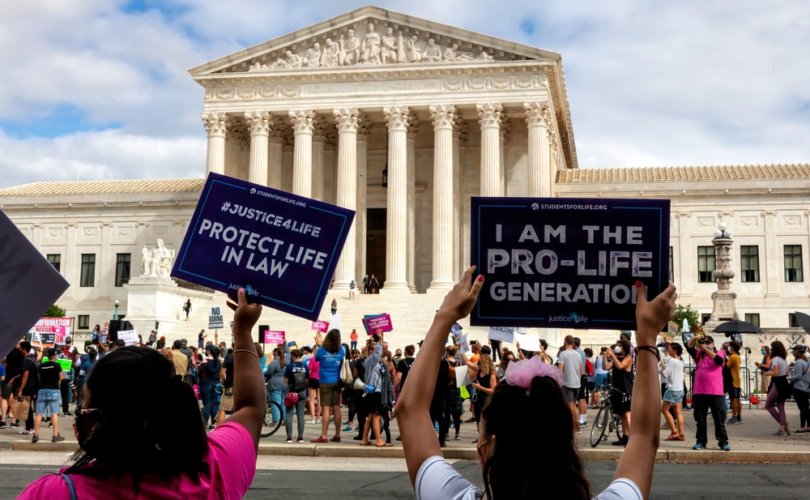 WASHINGTON, D.C. (LifeSiteNews) — After releasing three decisions Monday without handing down a ruling on a much-anticipated abortion case that could see the federal “right to abortion” overturned, the U.S. Supreme Court is slated to issue another round of decisions Wednesday.

According to the Supreme Court calendar, June 8 is scheduled as an “opinion issuance” day for the Court, which still has 30 opinions to release just weeks ahead of the end of the term.

Wednesday’s opinions will be announced on the Supreme Court’s homepage beginning at 10 a.m. According to the Court website, “If more than one opinion will be issued, they will post in approximately 10-minute intervals.”

The Wednesday opinion date is somewhat unusual for the Court, which often hands down rulings on Mondays. However, Court watchers anticipate the justices could issue rulings on any day as the Court rapidly approaches the end of its term.

Pro-life and pro-abortion advocates alike have been keeping a watchful eye on the Court’s decisions in the past weeks and months, awaiting a pivotal ruling on Dobbs v. Jackson Women’s Health Organization, which concerns Mississippi’s 15-week abortion ban.

A ruling in favor of Mississippi’s right to limit abortion could mean overturning both Roe v. Wade, the 1973 ruling that established a “constitutional right to abortion” throughout the United States, and Planned Parenthood v. Casey (1992), which upheld Roe.

After the unprecedented leak of a draft majority opinion in the case, penned by Justice Samuel Alito, many anticipate the Court will decide to overturn Roe and Casey, once again allowing states to draft their own laws to allow, limit, or outright ban abortion.

According to the leaked draft, “Roe was egregiously wrong from the start. Its reasoning was exceptionally weak, and the decision has had damaging consequences.”

Therefore, Alito asserted it is “time to heed the Constitution and return the issue of abortion to the people’s elected representatives.”

The Supreme Court confirmed the unprecedented leak’s authenticity but said it is not the Court’s “final position.”

As the nation awaits the fate of Roe, many Republican-led states have already angled to impose restrictions on abortion or fully outlaw it.

Meanwhile, many Democrat-led states have instead moved to broaden abortion access, even encouraging pregnant women to travel from their pro-life home states to kill their unborn babies.

A recent Harvard/Harris poll found that a majority of respondents wanted the Supreme Court to cut back Roe v. Wade.

According to the poll, 35% of respondents favored repealing Roe entirely, and 19% said they wanted to reduce the timeframe of legal abortion to 15 weeks’ gestation.

Conversely, 38% said they wanted Roe to stand as is, and just 8% wanted abortion legalized for the full 36 weeks of pregnancy.