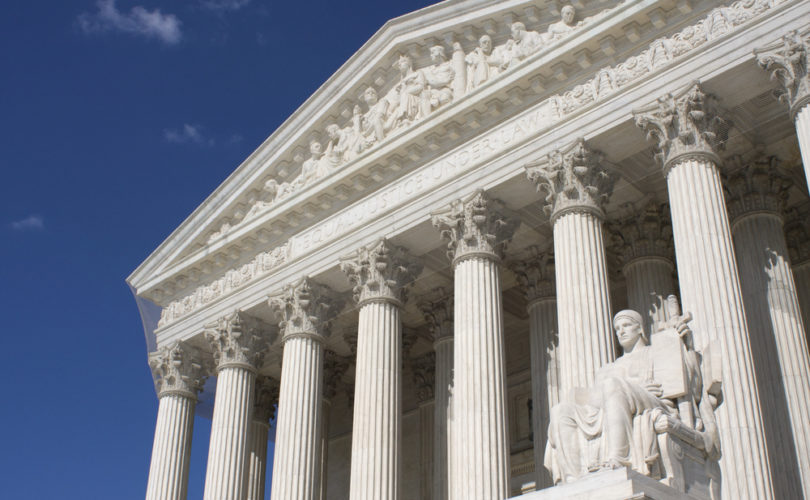 WASHINGTON, D.C., June 16, 2014 (LifeSiteNews.com) – The U.S. Supreme Court has unanimously decided to allow the Susan B. Anthony List to challenge a law that it says could chill free speech and intimidate American citizens not to criticize politicians.

Former Democratic Congressman Steve Driehaus sued the pro-life group after it threatened to purchase billboards in Ohio's first district saying that his vote for the Affordable Care Act would lead to “taxpayer-funded abortion.” Driehaus, who campaigned as a pro-life Democrat, said the criticism was false and cost him his seat in the 2010 midterm elections, which saw a Tea Party landslide.

He blamed the pro-life group for his “loss of livelihood” during his seven-point loss to pro-life Republican Steve Chabot, suing under an Ohio statute that prohibits false statements in political advertisements.

Justice Clarence Thomas, who wrote today's opinion on behalf of the unanimous court, said the law could allow frivolous complaints that would badger citizens into silence.

He noted that the state statute allows “any person” – including the candidate or his campaign officials – to file a complaint with state authorities.

“There is a real risk of complaints from…political opponents,” he wrote. “And petitioners, who intend to criticize candidates for political office, are easy targets.”

“The target of a complaint may be forced to divert significant time and resources to hire legal counsel and respond to discovery requests in the crucial days before an election,” he wrote.

The decision reversed the Sixth Circuit Court of Appeals' ruling that the Ohio law could not be challenged and remanded the case for further hearings.

“Today’s decision by the court is a step toward victory for the freedom of speech and the broad coalition of groups who have supported SBA List throughout this case. The truth or falsity of political speech should be judged by voters, not government bureaucrats,” SBA List President Marjorie Dannenfelser said.

Mike Carvin, the organization's attorney, told LifeSiteNews this morning that “Ohio's blatantly unconstitutional scheme…hindered our political speech in 2010 and 2012” and that he will move “very expeditiously” to have the Sixth Circuit Court hear the case. He hopes to have a ruling before the November election. “Everybody's aware of the First Amendment vulnerability of this law,” he said.

Obama-nominated U.S. District Judge Timothy Black of Ohio allowed Driehaus' lawsuit to move forward in 2011, unleashing a process that saw federal authorities seize the SBA List's computers as “evidence” in June 2012. Black dismissed the case in 2013. Driehaus then appealed to the Sixth Circuit, which ruled that the pro-life group could not challenge the law.

Democrats for Life of America supported both the health care law and Driehaus’ lawsuit against the SBA List.

Dannenfelser said she feels vindicated that the law is unconstitutional and that voters will be able to weigh whether the SBA List's statements are true or false.

“It is beyond dispute that ObamaCare contains multiple abortion-funding provisions,” she said. The Patient Protection and Affordable Care Act requires employers to cover “contraceptives” such as Plan B and Ella, which can act as abortifacients. Many insurance plans within the state health exchanges have the option of covering abortions, with enrollees paying only a $1 surcharge for abortion coverage.

“This reality will continue to be an issue in the midterm elections and future election cycles,” she said. “As a result of the Supreme Court’s decision, SBA List is now one step closer in its quest to unleash the First Amendment from the constraints imposed by Ohio’s unconstitutional false speech statute.”

Dannenfelser said she plans to campaign in Ohio in 2014 – although the group has not yet announced its targeted races. It has already entered hotly contested U.S. Senate races in North Carolina, Arkansas, and Louisiana, where vulnerable Democrats could be forced out of office over their stance on abortion.

“We are optimistic that the district court will rule quickly and will side with the First Amendment, so that we may proceed in Ohio – without fear of prosecution – with our ongoing efforts to inform voters that their elected representatives voted for taxpayer funded abortion,” Dannenfelser said.