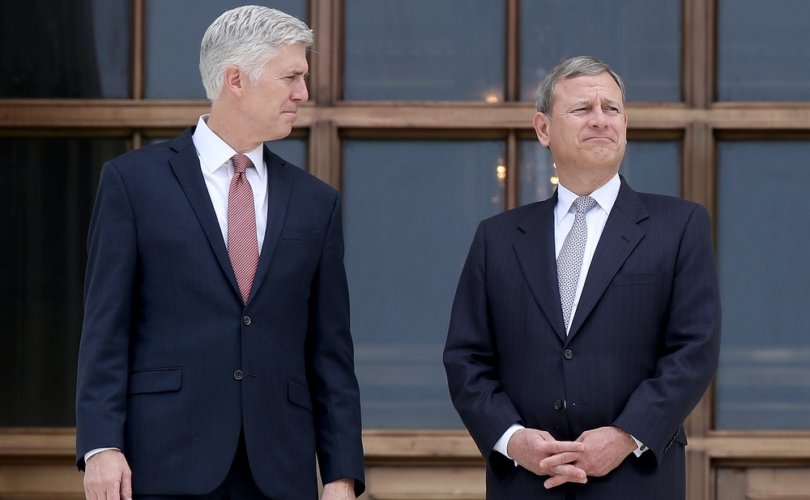 WASHINGTON, D.C., June 15, 2020 (LifeSiteNews) – Republican-appointed Justices John Roberts and Neil Gorsuch joined the U.S. Supreme Court’s liberals Monday in ruling that longstanding anti-discrimination law should be reinterpreted to cover homosexuality and gender confusion, in a case that will have drastic ramifications on religious liberty and force Americans to adopt a “fluid” understanding of biological sex in scores of policies.

Gorsuch, President Donald Trump’s first addition to the nation’s highest court, wrote the majority opinion for the 6-3 ruling, which concluded that “sex discrimination” in Title VII of the 1964 Civil Rights Act should be interpreted to mean sexual orientation and gender identity, in addition to its original biological meaning.

“Today, we must decide whether an employer can fire someone simply for being homosexual or transgender,” Gorsuch wrote. “The answer is clear. An employer who fires an individual for being homosexual or transgender fires that person for traits or actions it would not have questioned in members of a different sex. Sex plays a necessary and undisguisable role in the decision, exactly what Title VII forbids.”

The majority’s reasoning flies in the face of both the plain statutory meaning of “sex” in 1964 and the clear legislative intent of the lawmakers who drafted and passed the Civil Rights Act, as explained by Alliance Defending Freedom (ADF) senior counsel John Bursch. “There is little dispute that, in 1964, the term ‘sex’ was publicly understood, as it is now, to mean biological sex: male and female,” he writes. “After all, the term ‘gender identity’ wasn’t even part of the American lexicon at the time. Its first use was at a European medical conference in 1963. And no semblance of it appeared in federal law until 1990.”

But Gorsuch’s opinion panned the notion of authorial intent, a bedrock principle of judicial originalism, by declaring that judges “are not free to overlook plain statutory commands on the strength of nothing more than suppositions about intentions or guesswork about expectations. In Title VII, Congress adopted broad language making it illegal for an employer to rely on an employee’s sex when deciding to fire that employee.”

Justices Samuel Alito and Clarence Thomas dissented, panning the majority opinion as “legislation” written under the “deceptive” guise of “interpreting a statute,” reminding the majority that the court’s duty “is limited to saying what the law is” rather than adding to it.

Trump’s other appointee, Justice Brett Kavanaugh, wrote his own dissenting opinion, in which he noted that the “responsibility to amend Title VII belongs to Congress and the President in the legislative process, not to this Court.”

Kavanaugh also wrote, however, that the majority opinion represented an “important victory achieved today by gay and lesbian Americans,” who “advanced powerful policy arguments,” displayed “extraordinary vision, tenacity, and grit,” and “can take pride in today’s result”… “notwithstanding my concern about the Court’s transgression of the Constitution’s separation of powers.”

Conservatives warn that today’s ruling will not merely protect homosexual or gender-confused Americans from tangible harm. Rather, it will require churches to recognize same-sex “marriages”; force photographers, florists, and bakers to participate in same-sex “weddings”; compel employers to fund drugs and surgeries to help people imitate members of the opposite sex; and make women and girls to share sleeping quarters, showers, changing areas, and restrooms with gender-confused males (or men simply claiming trans status to get close to vulnerable women).

“The core issue before the Court in this case was whether it is within the legitimate power of judges to suddenly redefine the meaning of words and rewrite a 55-year-old statute. Sadly, the Court answered in the affirmative,” commented Tony Perkins, president of the Family Research Council.

“Allowing judges to rewrite the Civil Rights Act to add gender identity and sexual orientation as protected classes poses a grave threat to religious liberty. We've already witnessed in recent years how courts have used the redefinition of words as a battering ram to crush faith-based businesses and organizations,” concluded Perkins.

Today’s ruling also largely relieves congressional Democrats of the need to enact the so-called Equality Act, a bill that would legislatively impose those same requirements on the country (though some of the details and specific applications may vary, meaning some LGBT activists will likely still demand that the act be passed to codify today’s ruling).

Gorsuch and Roberts’ support for the decision has appalled numerous conservative legal observers, and vindicated voices who argued that Senate Republicans were too quick to confirm Gorsuch’s nomination without further vetting. It also raises grave concerns over the caliber of jurists being groomed and promoted by “conservative” legal institutions such as the Federalist Society.

The crisis moment for the “conservative legal movement” has arrived.

The Roe v. Wade of religious liberty is here, and it was delivered by golden boy Neil Gorsuch.

While the question of whether to amend Title VII to add more categories may be a difficult one as a matter of policy, the question of the Court’s role on this issue was an easy one: Allow the people to decide the issue through their elected representatives. (2/x)

Have no doubts about what happened today: This was the hijacking of textualism.

You can't redefine the meaning of words themselves and still be doing textualism. This is an ominous sign for anyone concerned about the future of representative democracy. (end)

So there is a right to transgenderism but not to self defense? States can't set capital cases without federal court intervention but they can nullify federal immigration? That's the upshot from the court in just 35 minutes.

The answer is a rejection of judicial supremacy. Period. Read Federalist 78. Hamilton. Jackson. This grand experiment of deferring on every major issue to a few Ivy League educated elites is over.

I couldn't care less what the Supreme Court says on any issue. We're done here.

It remains to be seen whether this ruling will have any bearing on conservative enthusiasm to turn out for Donald Trump’s reelection in November. It is widely speculated, though not confirmed, that Trump’s third Supreme Court nominee would be Judge Amy Coney Barrett, someone believed to be more reliably conservative than Gorsuch or Kavanaugh.