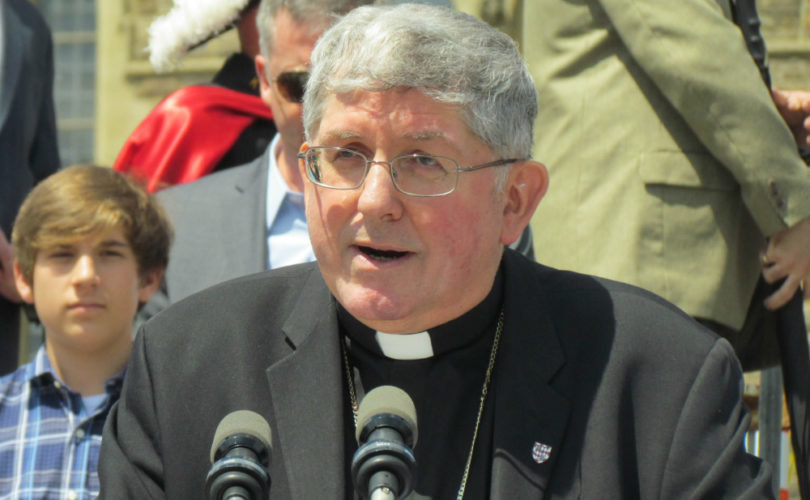 TORONTO, February 11, 2015 (LifeSiteNews.com) –The Canadian Supreme Court’s decision to legalize assisted suicide could turn doctors into “agents of death” rather than “servants of healing,” warned Cardinal Thomas Collins, the archbishop of Toronto.

In a far-ranging critique Tuesday, Collins addressed the threat the decision poses to the lives of innocent people, the individualistic rationale behind it, the need for improved palliative care and increased compassion for the sick and dying, and what can be gained spiritually from the final stages of life being allowed to take place naturally, rather than shortened out of fear.

The cardinal began by stressing the importance of caring for the very sick and dying. “There is certainly no need to take extreme measures to extend the length of life,” he said. “But there is a profound difference between compassionately journeying with someone who is dying, or who is suffering … and killing that person, or helping that person to commit suicide. No one has a right to do that.”

People who contemplate suicide should be counseled and comforted, Collins continued, “so they can appreciate the value of their life and know they are loved.” To ask doctors to instead help them die “is a perversion of the vocation of physicians.” Collins noted that the Supreme Court expressed confidence that “local Colleges of Physicians” would protect their members whose consciences forbade assisting suicide. But the court’s “trust is misplaced,” he said, noting that the Ontario College of Physicians and Surgeons is already planning to force such doctors to refer patients seeking help killing themselves to doctors they know will comply, forcing the former “to become accomplices.”

The Saskatchewan College is poised to do the same, and both bodies are close to going even further, indicating they could require doctors to do abortions and assist at suicides against their consciences in “emergencies” if no other doctor is available.

“We all are on the way to death and should gain wisdom from contemplating that inescapable fact, so that we use each present moment to prepare for the moment of our death by living well,” wrote Collins.

“We should accompany each person with love, especially those without friends or family. But any society that authorizes killing people through assisted suicide and euthanasia has lost its moral compass,” he concluded.