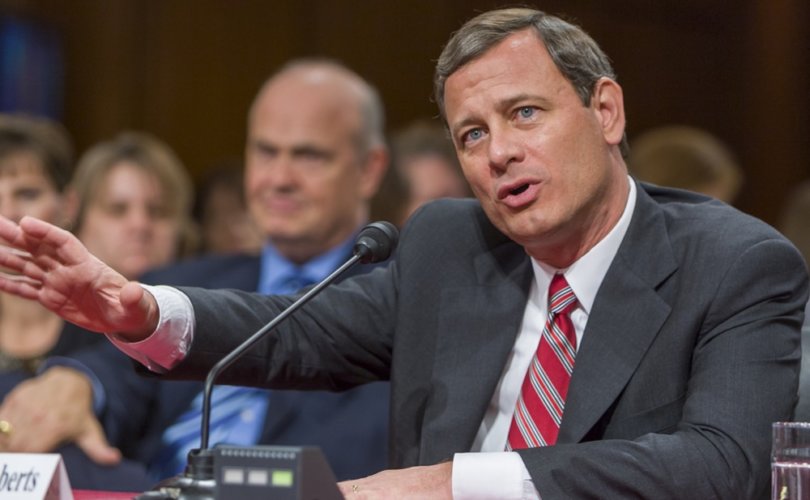 WASHINGTON, D.C., June 1, 2020 (LifeSiteNews) — The state of California may continue to limit church attendance during the coronavirus pandemic, according to the U.S. Supreme Court. Chief Justice John Roberts, who was nominated to his position by Republican president George W. Bush in 2005, sided with the liberal justices in a 5-4 vote in favor of the Golden State’s restrictive measures.

California’s guidelines for “Places of Worship and Providers of Religious Services and Cultural Ceremonies,” issued by the state government on May 25, stated, “Places of worship must … limit attendance to 25% of building capacity or a maximum of 100 attendees, whichever is lower.”

The Protestant community’s lawyers had asked the Supreme Court to issue an emergency injunction, commanding the state to cease and desist the “biased shutdown of religious worship in California, in blatant violation of the First Amendment’s constitutional guarantee that citizens may freely exercise their religious faith.”

As the Thomas More Society, representing South Bay United Pentecostal Church, pointed out, the restrictions imposed by the state government “are in violation of their constitutional rights to freely practice their religion via worship services, regardless of their plans to observe an entire litany of precautionary measures.”

In his concurring opinion, Roberts argued that the limits on church attendance “appear consistent with the Free Exercise Clause of the First Amendment.” The First Amendment tells Congress it “shall make no law … prohibiting the free exercise” of religion.

The chief justice continued by explaining that “comparable secular gatherings, including lectures, concerts, movie showings, spectator sports, and theatrical performances, where large groups of people gather in close proximity for extended periods of time,” are faced with “[s]imilar or more severe restrictions.”

California’s guidance for churches “exempts or treats more leniently only dissimilar activities, such as operating grocery stores, banks, and laundromats, in which people neither congregate in large groups nor remain in close proximity for extended periods,” Roberts added.

The Constitution, in Roberts’s understanding, gives government officials broad powers to act during “a dynamic and fact-intensive matter subject to reasonable disagreement.” Those officials “should not be subject to second-guessing by an ‘unelected federal judiciary,’ which lacks the background, competence, and expertise to assess public health and is not accountable to the people.”

Justice Brett Kavanaugh, nominated to the Supreme Court by President Donald Trump despite severe pushback from Democrats and liberal media, wrote a dissenting opinion. He was joined by Justices Neil Gorsuch, also nominated by Trump, and Clarence Thomas, who became part of the Supreme Court in 1991 under President George H.W. Bush.

“I would grant the Church’s requested temporary injunction because California’s latest safety guidelines discriminate against places of worship and in favor of comparable secular businesses,” Kavanaugh bluntly stated. “Such discrimination violates the First Amendment.”

“What California needs is a compelling justification for distinguishing between (i) religious worship services and (ii) the litany of other secular businesses that are not subject to an occupancy cap,” according to Kavanaugh.

“California has not shown such a justification. The Church has agreed to abide by the State’s rules that apply to comparable secular businesses.”

As pointed out by the associate justice, “California has ample options that would allow it to combat the spread of COVID–19 without discriminating against religion,” for instance insisting on implementing social distancing during worship services. South Bay United Pentecostal Church had, in fact, already “agreed to abide by the State’s rules that apply to comparable secular businesses.”

Several organizations supporting religious liberty came out against the Supreme Court’s decision in favor of California’s restrictions on the free exercise of religion.

Charles LiMandri, special counsel to the Thomas More Society, which had prepared the emergency appeal on behalf of South Bay United Pentecostal Church, called Chief Justice Roberts’s concurring opinion a text “that should have little or no precedential value.”

He cautioned that “there is still a split in the Circuit Courts of Appeal, and this case is far from over. We will proceed with our expedited appeal in the Ninth Circuit and, if necessary, seek a decision from the U.S. Supreme Court on the merits under a much more favorable standard.”

LiMandri emphasized that “without the filing and vigorous litigation of this lawsuit, churches would still be closed in California under Governor Newsom’s original shut-down orders.”

Liberty Counsel’s Mat Staver echoed LiMandri, predicting that the Supreme Court will get back to the question of restricting the First Amendment during the coronavirus pandemic.

“The denial of emergency relief for the California churches does nothing to settle the matter,” he said. “It is not a ruling on the merits. The litigation will continue until the lower courts issue final rulings, at which time the Supreme Court will be able to consider one or more of these cases on the merits.”

Kelly Shackelford, president, CEO, and chief counsel of First Liberty Institute, said, “Treating churches unequally is wrong. The Constitution specifically protects the free exercise of religion, it does not speak for the defense of laundromats.”

“Churches and houses of worship just want to be treated equally and trusted to adhere to proper social distancing and hygiene practices just like they do when they go about the rest of their daily lives in permitted social settings,” he added.

Based in the San Francisco Bay Area, The Mercury News reported that while “gatherings of any sort — including religious services — were still banned Sunday by local orders in the Bay Area,” some Christian groups “decided to reopen their doors on Sunday in defiance of the orders.”

“Germs are important, yes, absolutely,” one San Jose pastor admitted to the newspaper. At the same time, he added, saving a soul is of greater importance, and “only Jesus Christ can save a soul.”