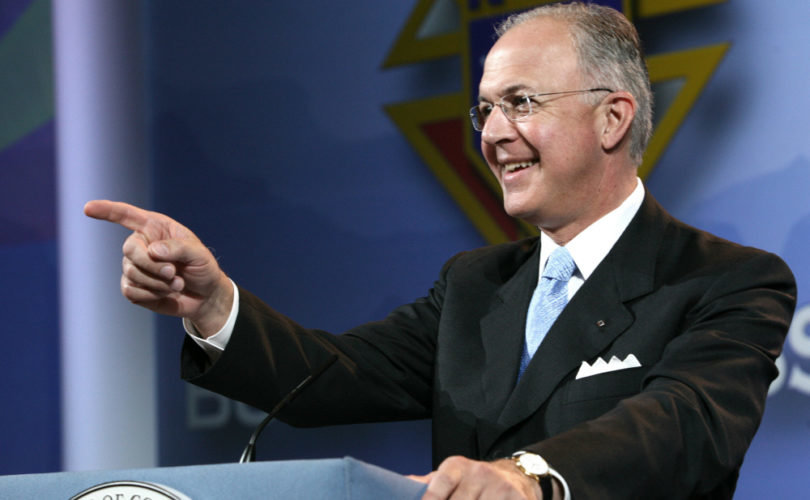 TORONTO, August 3, 2016 (LifeSiteNews) — Carl Anderson, leader of the Knights of Columbus, told an international gathering of the Catholic men’s organization on Tuesday that abortion is the most significant moral issue in the U.S. presidential race and that Catholics cannot vote for a pro-abortion candidate.

Abortion is “in reality a legal regime that has resulted in more than 40 million deaths,” and not “just another political issue,” Anderson told the more than 2,000 attendees at the annual four-day Supreme Convention in Toronto, as reported by National Catholic Reporter’s David Gibson.

“What political issue could possibly outweigh this human devastation? Abortion is different. Abortion is the killing of the innocent on a massive scale,” Anderson said.

Elected Supreme Knight in 2000 and considered one of the most influential lay Catholics in the Church, the 65-year-old lawyer and father of five is a longtime Republican who has held various positions in the Reagan administration and worked for the late North Carolina Senator Jesse Helms.

“We will never succeed in building a culture of life if we continue to vote for politicians who support a culture of death,” Anderson told the crowd, which included 95 bishops, 11 cardinals, numerous priests, and Knights and their families from across North and Central America, the Caribbean, Africa, Asia and Europe.

Democratic candidate Hillary Clinton is an abortion extremist, and her running mate, Virginia Senator and Catholic Tim Kaine, has consistently signaled he will support the Democrats’ abortion-on-demand policies, despite his stated personal pro-life sympathies.

Republican candidate Donald Trump, who didn’t mention abortion in his acceptance speech, received mixed reviews from pro-life leaders after a closed door meeting in June, but his running mate, Indiana governor and former Catholic now evangelical Christian Mike Pence, is staunchly pro-life, stating most recently he and Trump will consign Roe v Wade to “the ash heap of history.”

The Knights of Columbus — who are “huge benefactors to dioceses and charitable causes” — could influence how the abortion issue “will play out in the church” and the campaign, Gibson suggested.

Anderson also spoke of the fraternity’s advocacy and aid to persecuted Christians, particularly those facing genocide in the Middle East.

“Christians there have been tortured, murdered, enslaved and driven into exile,” he said. “Many in the West wanted to look away, but we would not let them.”

Anderson, who last year testified before Congress and at the U.N. on the need for American and international support for Christians and other persecuted religious minorities in the Middle East, reiterated this in his annual report to the convention.

“In Iraq, Syria and neighboring countries, Christians and other religious minorities are facing extinction,” he said.

“Many receive no support from their governments or from the United Nations. They have had to rely on their fellow Christians and they have been able to rely on the Knights of Columbus,” added Anderson, in a reference to the Christians at Risk initiative.

“Since 2014, we have raised more than $11 million for Christian refugees. And that money has been a lifeline.”

Knights will soon number two million men around the world, with marked growth in Ukraine, Poland, and Lithuania.

In referring to the convention theme “A Light to the Nations,” Anderson noted the Knights are uniquely placed to answer Pope Francis’ question in Amoris Laetitia as to who will help strengthen marriages and families.

“What we do in our families and parishes will change the history of the Catholic Church in our communities,” pointed out the author of a 2008 bestseller: A Civilization of Love: What Every Catholic Can Do to Transform the World.