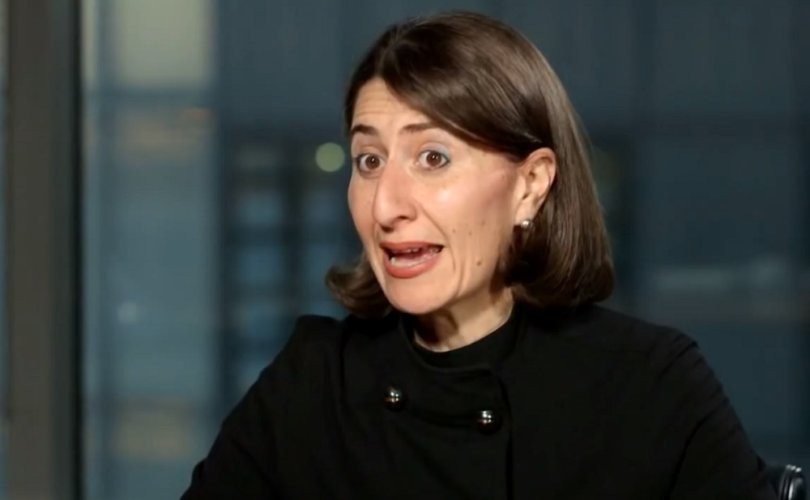 September 16, 2019 (LifeSiteNews) — In a stunning move that has shocked political commentators and caught many by surprise, including party members, a leadership challenge to New South Wales premier Gladys Berejiklian has been called. If successful, the victor could effectively kill a pending abortion decriminalisation bill by stopping any further parliamentary time being given to the private member’s bill, preventing it being voted on in the upper house and becoming law.

Without a change in leadership of the New South Wales government, the Reproductive Health Care Reform Bill 2019 is set to pass the upper house of the parliament this week.

The spill motion to be made at 10 A.M. tomorrow in a party room meeting doesn’t name a contender for the leadership, making it harder for Premier Berejiklian to defend the unexpected move. Inside sources have told LifeSiteNews “there is a lot of speculation as to who will be put forward as leader,” with Tanya Davies, M.P. and Dominic Perrottet, M.P. being the top contenders.

In a joint statement issued by Tanya Davies and Liberal Party senators Matthew Mason-Cox and Lou Amato, it was revealed they were informed only early on Monday morning (7:50 P.M. Monday night NSW time) that the four proposed amendments to the bill had been rejected. Parliament resumes on Tuesday. The amendments included “a prohibition on sex selection abortions, proper medical care for aborted babies born alive, protection of conscientious objection rights for doctors and allied health professionals, and stricter regulation of late term abortions.”

Premier Berejiklian did not inform them herself of the rejection.

M.P.s Tanya Davies and Kevin Conolly had previously told the premier three weeks ago that if these amendments were not met, the two of them would withdraw from the Liberal Party and as a result remove its slim two-seat majority. Such a move would have also cost them their political careers.

Citing the rejection of the amendments and the lack of due process normally given to a bill before the parliament, they stated, “We have come to the conclusion that the right course of action is not to leave the Parliamentary Liberal Party but to hold the Premier to account for presiding over this shameful process.”

“We have also been alarmed by the Premier’s continued failure to address the impasse in the Legislative Council which has slowly ground the Government’s legislative agenda to dust. This position is also untenable and must be urgently resolved for the good government of this State.”

Throughout the life of the bill, Premier Berejiklian had maintained the appearance of a hands-off approach, as if the bill weren’t hers, and made it appear as though the obligatory conscience vote on the issue was also out of her hands. Despite this and public opposition, she still voted for it in the lower house and as premier also allocated significant government time and other resources to the bill so it could be fast-tracked through the parliament.

Right to Life New South Wales CEO and Stand for Life rallies organiser Dr Rachel Carling said, “I have no doubt that the politicians involved in the spill are motivated by their pro-life beliefs and inspired by the pro-life community who have demonstrated in their thousands.”  The rallies outstripped the attendance of their pro-abortion opponents, with an estimated 5,000 attending in Martin Place in August and then 10,000 in Hyde Park on Sunday.