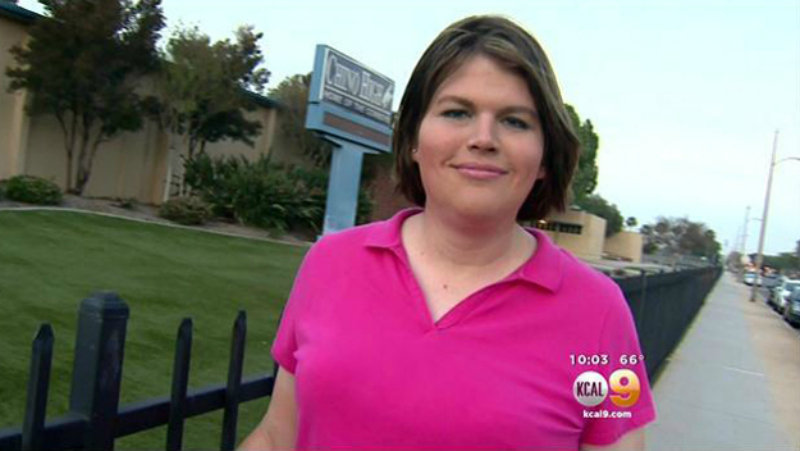 CHINO, CA, March 27, 2015 (LifeSiteNews.com) — Southern California’s Chino High School is facing outrage from parents and students alike after school administrators decided to keep secret a teacher’s plan to undergo a sex change in the middle of the school year.

The teacher in question, 32-year-old Michael Swager, showed up at work dressed and made up as a woman the morning of March 16, after eight years of teaching chemistry at the school as a man.  The teacher informed students that the 6’6”, 300 lb. man they once knew as “Michael” was now a woman, and told them they should call him “Amanda.”

School administrators had known for two years that Swager was planning to make the transition from male to female, but chose not to warn students or parents ahead of time.

“Chino High School is aware of the teacher’s decision,” the school said in a statement.  “It is a personal and private matter for the teacher.”

Swager’s case is complicated in that the teacher was raised as a boy after being born with ambiguous genitalia, as well as a condition called Kallmann Syndrome, which blocks sufferers from going through puberty without chemical assistance.

Because genetic testing was not widely available in the early 1980s, Swager’s parents were forced to choose for themselves whether to raise their child as a boy or a girl.  In the end, they decided the baby was a boy, and named him Michael, giving him hormone injections in his early teens to simulate male puberty.

All the while, however, Swager felt as if “he” was really a “she.”  In high school and college, Swager avoided the hormone treatments and began dressing as a female.  Later genetic testing would reveal that Swager did indeed possess two X chromosomes, not the X and Y combination that makes someone genetically male.

Upon learning the truth, Swager began taking female hormones to try and undo the effects of the male hormones she had been given as a young teen.  Outside of work, she lived as a female, dressing in feminine clothing and dating men.  But at work, she still presented herself as Michael – a man, albeit an androgynous one.

Swager said she originally planned to make her transition public after summer break in order to give her students and colleagues time to adjust.  But then her private life and work life began to collide.  After she changed her name to “Amanda Swager” on Facebook, a group of teens saw the page and confronted her about it at school.  Meanwhile, another group of students spotted her at the movies with her boyfriend during spring break and took video with their smartphones.  Swager decided it was time to come out, or risk being outed by the teens.  She notified school staff of her intention to take her situation public in a letter issued Thursday, March 12.  School officials kept mum, and Swager surprised the student body by showing up the following Monday wearing women’s clothing and calling herself Amanda.

The decision to keep Swager’s plans quiet upset both parents and students at the school, who said they would have liked more time to prepare for the change rather than leaving Michael Swager behind on Friday and coming back to Amanda Swager on Monday, without warning or explanation.

“In the end it's his choice. It's his life, but they should have at least said something about it so we could have known,” one student, Viviana Vasquez, told NBC-LA.

“On a Friday he was a man, on Monday he was woman,” a parent told the network, speaking anonymously. One dad, Rusty, said he thought the abrupt transition would be disruptive to the learning process, as children struggle to understand what has happened to the popular teacher.  “They’re going to want to know why did the teacher did what he did.”

Correction: An earlier version of this story improperly credited the Chino Champion with printing a quote gathered by KCAL 9.  The story has been updated to correct the error.