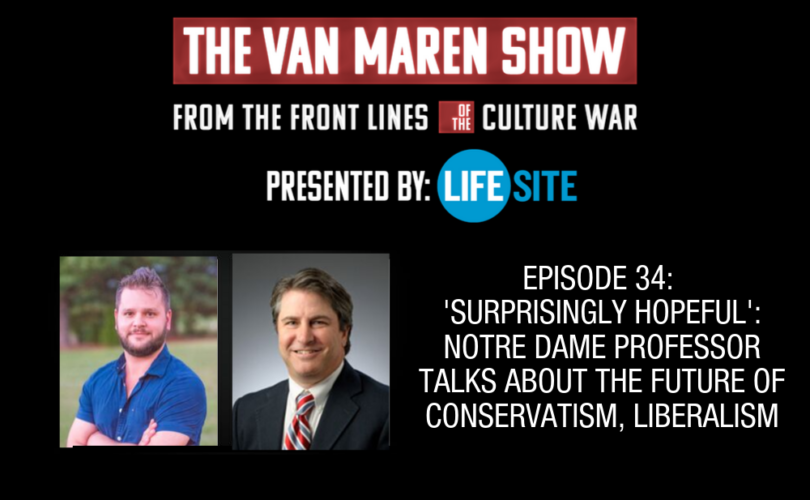 September 18, 2019 (LifeSiteNews) – On this week’s episode of The Van Maren Show, Jonathon Van Maren discusses the future of conservatism with Dr. Patrick Deneen, a professor at the University of Notre Dame.

Deneen has a background in Constitutional Studies and Political Theory. He was a speechwriter and special advisor to the Director of the United States Information Agency. He was an associate professor of government at Georgetown University and Princeton University before joining the faculty at Notre Dame in 2012. He has written several books and a number of articles focusing on the history of American political thought. His 2018 book, Why Liberalism Failed, is all about these topics.

Van Maren and Deneen dig deep into the details of conservatism and liberalism in the United States. This riveting, hope-filled episode is an important analysis of current society and the political landscape.

The thesis of Why Liberalism Failed can be summarized as, “liberalism is failing because liberalism is succeeding.” Deneen provides clarity in the definitions of conservatism and liberalism. He explains that there’s been confusion in what we typically call conservatism in the United States. Deneen suggests that we might more appropriately call conservatives “classical liberals.” He goes on to say, “we need to understand there are two variants or versions of liberalism itself.”

Deneen expands on these two versions of liberalism by stating that these “seemingly opposite positions of classical liberalism and progressive liberalism have actually worked in a joint way to undermine what I think of as the deeper commitments that a conservative properly understood should hold.”

Deneen discusses what should be done now and how conservatives can respond to the failure of liberalism. He mentions that this is a time when we need to think “more systematically, to begin to be imaginative in our political thinking about alternatives.” When liberalism began 400-500 years ago, it all started in the minds of a few forward thinkers who dreamed up a different way of life.

“Why shouldn’t we think it’s the case that there are some people with us right now? Maybe you’re one of them, maybe one of your listeners is the future John Locke, for a new system, a new way of thinking, a new way of being in the world. Something that will be the successor to this liberal order.”

He reminds us that this is not the end of history; human history is still being written and still being lived.

For a full listing of episodes, and to subscribe via various channels, visit our Pippa webpage here.