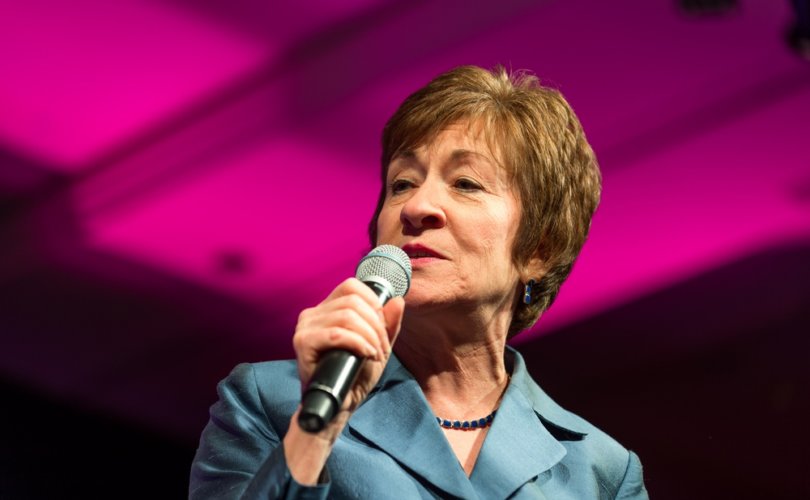 Collins made the announced Friday afternoon on the Senate floor.

The Senate voted 51-49 Friday to limit debate and advance Kavanaugh’s nomination to a final confirmation vote Saturday. Moderate Sen. Jeff Flake, R-AZ, announced his support afterward, turning all eyes on Collins and moderate Democrat Joe Manchin of West Virginia. Losing any one of the three would have forced Republicans to have Vice President Mike Pence break a tie; losing two would have defeated Kavanaugh.

“I will vote to confirm Judge Kavanaugh,” Collins confirmed at the end of a speech lasting more than 40 minutes. She discussed everything from her own assessments of past nominees and her discussions with Kavanaugh, to the unsupported assault claims against him and the broader issue of unreported sexual abuse.

“The #MeToo movement is real. It matters. It is needed, and long overdue,” she said. She also said she believes someone did assault Christine Blasey Ford in the past. But the “four witnesses she named could not corroborate any of the events of that evening gathering where she says the assault occurred […] I do not believe that these charges can fairly prevent Judge Kavanaugh from serving on the court.”

Collins praised Kavanaugh for his “record of judicial independence” and expressed hope he “will work to lessen the divisions in the Supreme Court so we have far fewer 5-4 decisions and so that public confidence in our judiciary and our highest court is restored.”

She also spoke favorably about Kavanaugh’s commitment to precedent, and expressed confidence that he would vote to uphold Obamacare, the Obergefell ruling that imposed same-sex “marriage” on the U.S., and Roe v. Wade. Roe v. Wade and its sister case Doe v. Bolton legalized abortion on demand in the U.S.

“Opponents frequently cite then-candidate Donald Trump’s campaign pledge to nominate only judges who would overturn Roe,” Collins said. “The Republican platform for all presidential campaigns has included this pledge since at least 1980. During this time, presidents, Republican presidents, have appointed Justices O’Connor, Souter, and Kennedy to the Supreme Court. These are the very three justices, Republican-president-appointed justices, who authored the Casey decision which reaffirmed Roe.”

“Suffice it to say, prominent advocacy organizations have been wrong.” https://t.co/s0LEzpkl4V pic.twitter.com/PDGI4ogfdo

Collins’ remarks echo previous assessments she’s given of her conversations with Kavanaugh, and resurrect conservative fears that he may not be the originalist Trump promised. During his initial hearings Kavanaugh expressed significant respect for Roe’s status as precedent, gave mixed signals on the judiciary’s ability to declare “unenumerated” rights such as abortion, and approvingly quoted Justice Anthony Kennedy’s majority opinion in Obergefell.

Kavanaugh’s pro-life supporters argue that his non-committal answers were carefully phrased to navigate a narrowly-divided Senate, and that he ultimately will vote to overturn Roe. Pro-abortion advocates agree, and bitterly denounced Collins for her decision.

Collins “has made it clear that she can no longer call herself a women’s rights champion,” the Planned Parenthood Action Fund declared. Planned Parenthood Federation of America executive vice president Dawn Laguens blasted her for “sid[ing] with those who disbelieved, disrespected and even mocked survivors of sexual assault” and voting “against abortion” and “birth control access.”

“Senator Collins may claim to be pro-choice and an ally to women, but this vote will now be her legacy,” NARAL president Ilyse Hogue said in a statement. “She has claimed to support women and our fundamental freedoms, but now we know she will throw our rights, our lives, and our well-being under the bus when given the chance.”

“We will never forget it, not today and not in 2020 when Maine voters will elect someone who will actually fight for Maine women and families,” Hogue threatened.

Within minutes of Collins concluding her speech, Manchin announced his “yes” vote as well, fueling speculation he was waiting to settle on a position until he saw whether his vote would be the deciding one.

“Based on all of the information I have available to me, including the recently completed FBI report, I have found Judge Kavanaugh to be a qualified jurist who will follow the Constitution and determine cases based on the legal findings before him,” Manchin said. “I do hope that Judge Kavanaugh will not allow the partisan nature this process took to follow him onto the court.”

Barring any last-minute reversals or bombshells, Kavanaugh will be confirmed tomorrow. The exact time of the vote is uncertain, as Sen. Steve Daines, R-MT, has a scheduling conflict with his daughter’s wedding in Montana.

“My good friend and colleague, [Rep.] Greg [Gianforte], has come to save the day. If I need to be in two places at once to walk my daughter down the aisle on her wedding day and to be the final vote to put Judge Kavanaugh on the Supreme Court, he’s offered me use of his plane,” Daines told Fox News. “I appreciate his generosity as well as his dedication to family and country.”