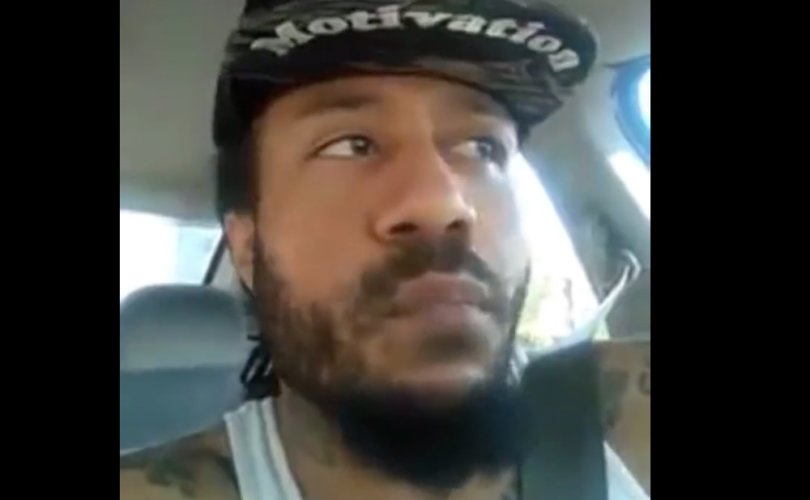 MILWAUKEE, Wisconsin (LifeSiteNews) — The suspect accused of ramming his maroon Ford Escape into a Wisconsin Christmas parade Sunday, killing 5 and injuring 48, had been arrested and charged with five serious crimes just weeks earlier when he allegedly ran over his ex-girlfriend with the same S.U.V. after a violent argument.

The suspect had been released on cash bail only days before the incident by a district attorney widely known as a progressive prosecutor, and who previously acknowledged his lenient policies could enable freed criminals to “go out and kill somebody.”

Prior to his arrest in connection with the attack on the Christmas parade in Waukesha, Wisconsin, Darrell E. Brooks, 39, was arrested November 2 in Milwaukee for allegedly punching the mother of his child in the face during a dispute in a hotel room, after which he followed her to a gas station where he hit her with the same car he is suspected to have used to kill and injure dozens of parade participants weeks later, The New York Times reported.

The Times noted that according to the police report, the woman had tire marks on her clothing and sustained “other injuries from the incident.”

Brooks was arrested and charged with three misdemeanors and two felonies, including second degree reckless endangerment (felony) and battery (misdemeanor) along with felony bail-jumping, misdemeanor disorderly conduct, and resisting or obstructing an officer.

Held in custody for several weeks, Brooks was then released on only $1,000 cash bail just days before the fatal attack in Waukesha Sunday night.

It’s possible Brooks meted out further violence against his ex-girlfriend after he was released.

The Daily Wire reported that “a neighbor of the man suspected of killing five people in a vehicular rampage on Sunday says that the man’s ex-girlfriend fled his home ‘with no shoes and a black eye’ shortly before the tragedy.”

Milwaukee County District Attorney John Chisholm has admitted the bail for Brooks was set “inappropriately low,” while his office has stated it is launching an internal review of the matter.

According to the Washington Free Beacon, the Milwaukee DA, who was elected in 2007, “has been a leading figure among ‘progressive prosecutors,’” and “supports deferrals for some misdemeanors and ‘low-level’ felonies in order to cut down on incarcerations.”

‘Meet the Progressive DA Behind the Waukesha Bail Catastrophe.’ From @FreeBeacon: https://t.co/ZEy9kYXUQO

The Beacon reported that Chisholm has “taken credit for inspiring a new wave of prosecutors in cities like San Francisco, St. Louis, and Philadelphia who have enacted similar reforms,” and demonstrated support for the lenient cash-bail system that saw Darrell Brooks out on the streets just weeks after being charged with violent crimes.

The outlet also noted that Chisholm previously “acknowledged that his reform-minded approach could put murderers back on the streets of Milwaukee.”

“Is there going to be an individual I divert, or I put into [a] treatment program, who’s going to go out and kill somebody?” he said in an interview with the Milwaukee Journal Sentinel in 2007. “You bet. Guaranteed. It’s guaranteed to happen. It does not invalidate the overall approach.”

Conservatives have been quick to suggest that the horrific attack in Waukesha could have been prevented if Brooks had not been released on bail.

Former Wisconsin lieutenant governor Rebecca Kleefisch, who is running for governor of the state as a Republican in 2022, said the attack in Waukesha was “yet another avoidable tragedy that occurred because a violent career criminal was allowed to walk free and terrorize our community.”

“While non-violent J6 defendants have been rotting in solitary for 10 months, Darrell Brooks Jr was immediately released for TWO violent felonies and multiple misdemeanors on virtually NO BAIL so he could slaughter as many innocents as possible,” wrote Florida Republican congressional candidate Lavern Spicer.

Brooks’ criminal record goes back much further than this year, with charges on file as far back as 1999.

In 2006, he was convicted of felony “sexual seduction” of a 15-year-old, who became pregnant with his child. Brooks is currently registered as a Tier 2 sex offender in Nevada.

The suspect had also seems to have admitted to child sex-trafficking in a video now widely shared on social media.

Admitted pedophile, pimp, crack addict, multiple Felon- Darrell Brooks Jr. used his car as a deadly weapon killing 5 & injuring 48. Released on bail Nov 19th. Previously intentionally ran a woman over with his car. Media & Hollywood are you sure you want to make excuses for him? https://t.co/BepPTh84ri

While the motive behind the attack on the Waukesha Christmas parade is unknown, many have speculated that it was connected with the verdict in the Kyle Rittenhouse case which was released just two days before the Sunday night mass casualty event.

Rittenhouse, a teen who shot three white rioters in self-defense, killing two, during a Black Lives Matter protest in Kenosha, Wisconsin, was found not guilty of intentional homicide Friday.

The trial had been widely politicized and Rittenhouse smeared by legacy media members and U.S. President Joe Biden as a white supremacist.

Brooks had posted about the Rittenhouse verdict on social media, stating that he was not surprised Rittenhouse had been found not guilty.

The suspect in the Waukesha killings also had a history of posting anti-police content on social media, as well as sharing Black Nationalist and Black Lives Matter rhetoric.

A rap video recorded by Brooks which has gone viral on the internet following the horrific attack on the Christmas parade features violent and explicit lyrics combined with satanic imagery.

Some of the content attributed to Brooks that has been shared on social media, including another rap video in which he allegedly called for violent revolution and the rise of “Black Power,” have not yet been verified.

On Monday, just a day after the deadly attack in Waukesha, liberal progressive congresswomen Alexandria Ocasio-Cortez called for a reform of her district’s “excessive” cash bail system, saying the policy amounts to a “humanitarian crisis” and unnecessarily detains those who can’t afford bail.