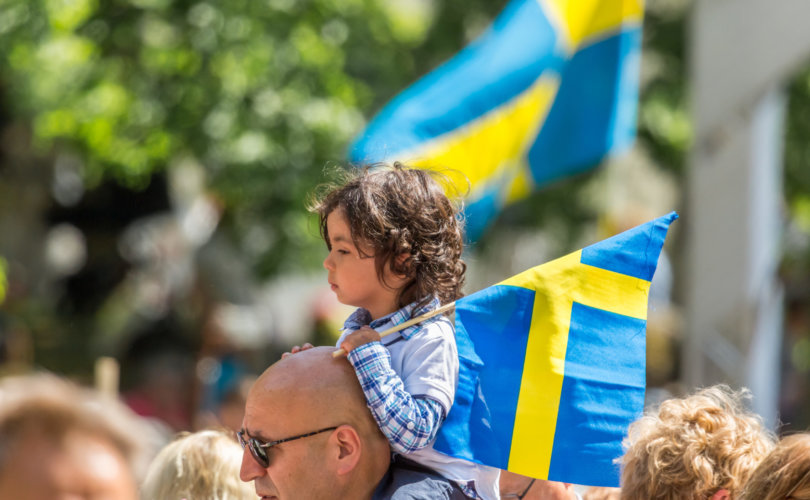 STOCKHOLM, Sweden (LifeSiteNews) – Sweden formally recommended against puberty blockers and other transgender hormone drugs for children this week in a move hailed by experts as a “major departure” from dangerous existing standards.

In new guidelines released Tuesday, the Swedish National Board of Health and Welfare (NBHW) said that it now “recommends restraint” regarding hormone drugs, citing “uncertain science” and significant side-effect risks.

Transgender hormones should be strictly prohibited for minors who develop gender dysphoria after the beginning of puberty, the NBHW said Tuesday in a press release, and otherwise should only be used in research settings or “exceptional cases.” Gender dysphoria is a mental illness due to a disordered, so-called “gender identity” at odds with one’s biological sex.

Sweden will also centralize gender clinics to a handful of national centers and ban experimental “gender-affirming” practices at private clinics, the NBHW said.

“Increased knowledge is needed, among other things, about the effects of the treatments on gender dysphoria and the mental health and quality of life of minors, in both the short and long term,” the NBHW’s Dr. Thomas Lindén said. The risks of hormone drugs for those under 18 “outweigh the possible benefits,” the agency said.

Transgender drugs and surgeries are linked to numerous serious and life-threatening side effects, including sterilization, heart attack, and increased risk of cancer and stroke.

But the NBHW previously recommended hormone-blocking drugs for children in 2015, despite lack of scientific evidence, saying at the time that clinical research would be conducted in the coming years. A review published Tuesday by the Swedish Board of Medical and Social Evaluation (SBU), however, concluded that there have still never been any quality studies evaluating the drugs in minors with gender dysphoria.

After years of experimenting on children, “it is still not possible to draw any definite conclusions about the efficacy and safety of the treatments, based on scientific evidence,” the SBU said. The effects of hormone blockers on gender dysphoria, cognitive function, and body mass, among other things, remain unknown, according to the review.

The Society of Evidence-Based Gender Medicine (SEGM) praised the updated guidelines, which “represent a major departure” from standards pushed by the pro-LGBT World Professional Association for Transgender Health, the group said. The change is “a vital step towards safeguarding vulnerable youth from medical harm,” SEGM added.

Yesterday, Sweden released its long-awaited guidelines for the care of gender-dysphoric youth. These guidelines represent a major departure from the WPATH "Standards of Care," and are a vital step towards safeguarding vulnerable youth from medical harm./1https://t.co/ci2zjOsC0W

Sweden’s shift on dangerous transgender drugs also follows a report in November 2021 revealing that more than a dozen minors who were administered puberty blockers at a top Swedish hospital suffered “severe injuries” as a result. One 11-year-old girl given puberty suppressors at Karolinska Children’s Hospital ended up with osteoporosis and damaged vertebrae, Swedish outlet SVT reported. Other children suffered liver damage and reduced bone density, and some became suicidal.

Karolinska Children’s Hospital, known for one of the country’s most prominent “gender identity” clinics, announced in May 2021 that it would no longer prescribe puberty blockers or cross-sex hormones to minors with gender dysphoria, except for in clinical trials. The hospital was first in Sweden to conduct “gender identity assessments” for kids and openly performed mutilating “sex change” surgeries on children, including a girl subjected to a mastectomy at 14.

“These treatments are potentially fraught with extensive and irreversible adverse consequences such as cardiovascular disease, osteoporosis, infertility, increased cancer risk, and thrombosis,” the hospital acknowledged in a statement in May. Sweden’s five other gender clinics have recently backed away from the practices as well, according to Medscape Medical News.

A total of around 800 Swedish children and young adults have been provided “gender transition” drugs, the NHBW said Tuesday.

The NBHW guidelines noted a dramatic spike in referrals to gender clinics, particularly among adolescent girls, between 2008 and 2018. Diagnoses for gender dysphoria skyrocketed in Sweden 1,500 percent among girls ages 13 to 17 over the 10-year period, the agency said in a previous report.

But the rate then cratered in 2019, after the release of a Swedish documentary, Trans Train, that exposed the lack of science behind the “gender transition” movement and highlighted people who regretted the devastating, life-altering procedures. The new NBHW guidance pointed to data on growing numbers of “ex-transgenders” or “detransitioners.”

Up to 98 percent of boys and 88 percent of girls with gender dysphoria will grow out of the disorder by adulthood if not subjected to puberty blockers, according to the latest edition of the American Psychiatric Association’s Diagnostic and Statistical Manual of Mental Disorders.

The NBHW’s reversal comes amid a larger international reckoning on experimental transgender practices. Finland was the first country to reverse course and recommend against hormone blockers for kids two years ago, due to the risks and paucity of scientific evidence. “As far as minors are concerned, there are no medical treatment[s] that can be considered evidence-based,” Finland’s Council for Choices in Health Care said in 2020. “Potential risks of [puberty blockers] include disruption in bone mineralization and as yet unknown effects on the central nervous system.”

In the U.K., the British High Court banned puberty blockers for children under 16 for several months last year, ruling that minors could not give consent for the experimental drugs. Multiple reviews commissioned by NHS England, including one in April 2021, have found that studies on puberty blockers and cross-sex hormones for gender dysphoria are of “very low quality.”

Two other U.S. states, Arkansas and Tennessee, have enacted laws in the past year to restrict transgender drugs and surgeries for minors. And Republican lawmakers in at least 16 states have introduced bills in recent months to ban the practices.