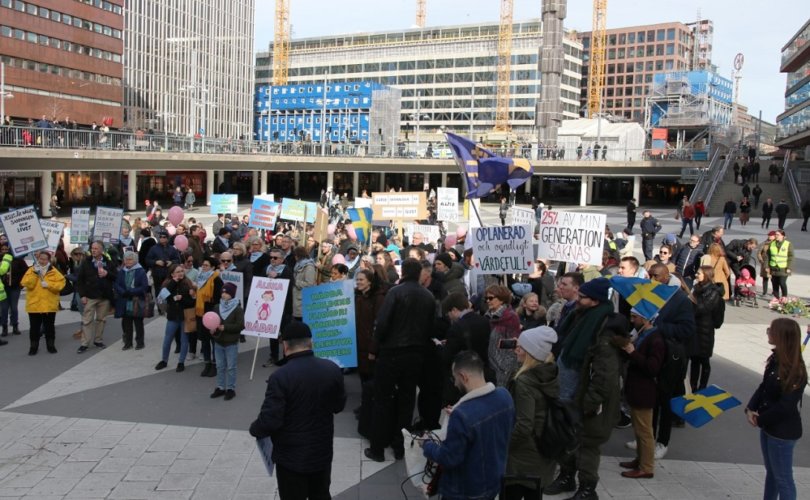 STOCKHOLM, Sweden, March 27, 2019 (LifeSiteNews) — This time of the year, pro-life marches gather large crowds in several countries. For example, in Argentina last week, up to two million people filled the streets, while in the U.S., over one hundred thousand braved the January cold in Washington. The presence of Catholics, both lay and clerics, is also usually notable. One of the points of such manifestations is to show that there is a sizable opposition to abortions and to experience being part of a dynamic movement.

In a country like Sweden, the situation is quite different. There were pro-life manifestations in the 1990s, but they ebbed out, and for several years, no pro-life march took place. However, this year, the organization Livsval (Life Choice), which was founded in 2017, put out an appeal for people to gather in the capital, Stockholm, on March 24, to listen to speeches and to walk six hundred meters together with homemade signs. Three hundred people came, but no bishops, neither Catholic nor Lutheran, and only two Catholic priests.

Max Skalenius, a twenty-one-year-old Catholic from Gothenburg in Western Sweden, traveled for four hours to Stockholm with two friends to participate in the march. They were happy to meet up with forty other young Catholics, but many were nervous that they would be attacked. The Society of Satan, which is part of The Global Order of Satan, had (on March 5) put an appeal for a counter-demonstration on its Facebook page, and almost six hundred people signed. As a precaution, the Catholic youngsters brought with them exorcized salt and water, plus rosaries.

It was a lovely, sunny day, perfect for a march, and when the youth group unfurled their two large Vatican flags at the meeting point, all fears disappeared.  Onlookers were generally curious and took pictures with their cell phones of the people with their signs — “Yes to life, No to Abortion,” Unplanned and Eternally Valuable,” while protesters carried large signs with messages like “Yes to Abortion” and “Jesus is an Invention,” and some shouted “Hang God.”

Skalenius says the speech by Mats Selander, the leader of the organization Human Rights for the Unborn and party leader for the Christian Value Party, “touched me as he spoke about the responsibility of men. He urged all men to stop being boys, to become men.” Selander also said many women who get an abortion actually are victims. They pretend they don’t regret their choice, but inside they mourn the child they have lost.

For Skalenius, the event was a dream come true, “I have always dreamt of being part of something like this in Sweden. It was such a joy to see. And the pro-life movement is here to stay. I really believe in that.”

Afterward, the Catholic youth met up with one of the priests in the middle of town to pray a rosary and recite the Lauretanian litany. Finally, the priest blessed the small group.

For these young people, the pro-life march did not provide them with the warm feeling of being part of an enormous crowd or promise an imminent turnaround in the legislation of the nation. For them and others looking on, the sensation was that there were any at all daring to oppose the reigning opinion of political and cultural power. The cause of exhilaration for the few pro-lifers was the sheer sense of existing and the cause of anger of their opponents. They broke the massive uniformity of Swedish public life and found strength in their prayerful courage to do so.