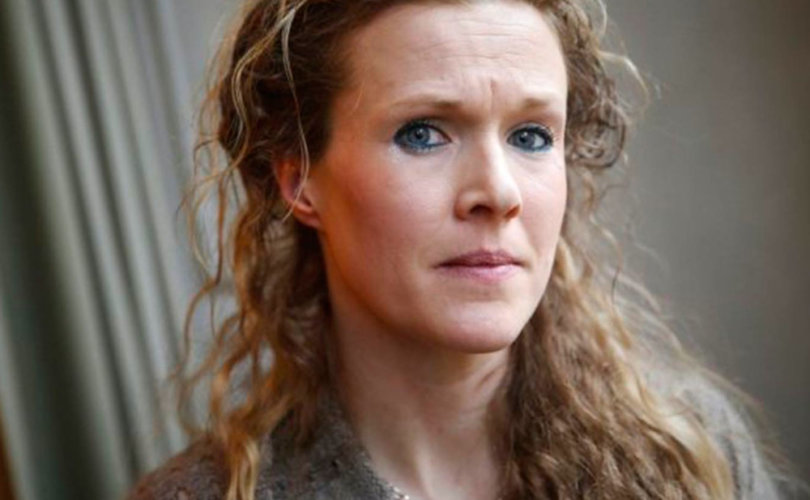 January 31, 2017 (LifeSiteNews) – Swedish midwife Ellinor Grimmark, a Christian who refuses to perform abortions as part of her daily clinical duties, is appealing to a labor tribunal after being turned down for jobs at Region Jönköping clinics on three occasions.

Grimmark has recently filed a lawsuit against the Jonkoping regional health authority and claimed damages for violation of the European Convention on Human Rights and compensation for discrimination. The appeal hearing is currently in progress with a verdict expected in a few weeks.

It all began in 2013 when a women's clinic terminated a contract previously offered to Grimmark before she started her job because she explained that she was unwilling to participate in abortions.

The Alliance Defending Freedom, a U.S.-based Christian group backing her case, said “the head of the maternity ward simply left a telephone message stating that 'she was no longer welcome to work with them' and questioned 'whether a person with such views actually can become a midwife.’”

A few months later, Grimmark tried to obtain employment with another clinic, which told her that midwives unwilling to perform abortions have no place at a women’s hospital. A third potential employer withdrew a job offer because of the complaints the midwife filed against the first clinic.

In 2015, a district court not only decided against the midwife but ruled that she was liable to pay for the other party’s legal costs, amounting up to more than $109,000 USD.

In a November 2015 statement, the ADF said, “We cannot allow that people are being punished for making decisions consistent with their conscience.”

“There is much at stake. The case of Ellinor might set a significant precedent in Europe. The battle for freedom of conscience for medical workers is being heavily fought both nationally and at the European level. International laws, to which Sweden is obligated, recognize freedom of conscience,” it said.

ADF's chief European lobbyist, Robert Clarke, said, “Nobody should be forced to choose between following their conscience and pursuing their profession.”

ADF filed an expert brief in support of Grimmark's appeal, and has asked for donations to support the case via its website.

“Eleanor Grimmark sought employment to work with childbirth and postnatal care, not to work at a gynecological department. Abortion services are usually planned and are only a very limited part of the work at a women's clinic,” the lawyers pointed out.

In defense of Grimmark, the lawyer cited article nine of the European Convention on Human Rights, which requires states to safeguard “freedom of thought, conscience and religion.” But it also allows restrictions for certain cases, including “for the protection of health” of other citizens.

The convention is directly applicable in the Swedish legal system.

A Council of Europe resolution adopted in 2010 defends “the right to conscientious objection in lawful medical care.”

“No person, hospital or institution shall be coerced, held liable or discriminated against in any manner because of a refusal to perform, accommodate, assist or submit to an abortion,” it says.

Resolutions such as this one are not legally binding upon member states but give guidance to the European Court when it is examining a case.

The Swedish Abortion Act also stipulates that freedom of conscience is to be granted to healthcare professionals who cannot participate in abortion on the basis of moral or religious reasons.

The lawyers point out that since the adoption of that Act, “Swedish hospitals have in different workplaces given individual doctors and midwives freedom of conscience,” with three of them testifying in Grimmark’s trial in the District Court of Jönköping.

“These testimonies show that it is possible to provide care that is proscribed by law while, at the same time, individuals are granted freedom of conscience.”

Opponents argue that Sweden's policy on abortion follows the principle that “always the need of the patient comes first.”

The key opposing argument is that the midwife has a choice about what profession she chooses, but in many cases a woman having an abortion could not choose to become pregnant, said Mia Ahlberg, president of the Swedish Association of Midwives.

However, Grimmark's lawyers argue that there are other midwives who can perform the tasks she will not perform.

Grimmark “has a huge organization behind her,” Ahlberg said, referring to the ADF, who is working with Scandinavian Human Rights Lawyers. Because of this, Grimmark's case is seen as one testing the boundaries of freedom of conscience and anti-Christian discrimination.

Stating that the opposition's case “is part of a bigger picture,” Ahlberg said “it's about women's rights, human rights and access to good, safe healthcare.”

Ahlberg is concerned that if the health authority won, the case could set a precedent for healthcare professionals' right to freedom of conscience. If Grimmark were to win, it could have a big impact on Swedish healthcare, Ahlberg said.

“For example, a nurse who is a Jehovah's Witness might refuse to perform a blood transfusion,” she said

Because Swedish midwives are given more medical competence than in many other countries — training that includes abortion procedures and after-care — she pointed out that “it's part of our professional competence — so the employer had a right to say 'you cannot work here.’”

Ahlberg said Swedish midwives are able to conduct abortions “quite independent” in some units, a practice that until modern times was only performed by doctors. She said this is different from other countries but argued that research shows this model works well and is something that could be implemented especially in low-income countries.

According to Ahlberg, Sweden's shortage of midwives is not a valid reason to make an exception for Grimmark, stressing that women's rights and the integrity of the midwifery industry must be defended.

For now, Grimmark is forced to commute to Norway, where midwives and doctors are granted freedom of conscience.

“This is a waste of resources and a shortage in democracy,” her lawyers said.

Caleb Stephen is a widely-published Christian conservative freelance journalist, columnist and social commentator based in Australia. He is also the founder and Editor-In-Chief of The Caleb Report. Caleb, the oldest in a family of nine, has been an active pro-life advocate for a number of years, participating in rallies, political campaigns, multimedia promotion and public events. Caleb is thankful for the opportunity to be one of LifeSiteNews’ Australian correspondents. Visit his website www.calebstephen.com and follow him on Twitter @CalebSOfficial