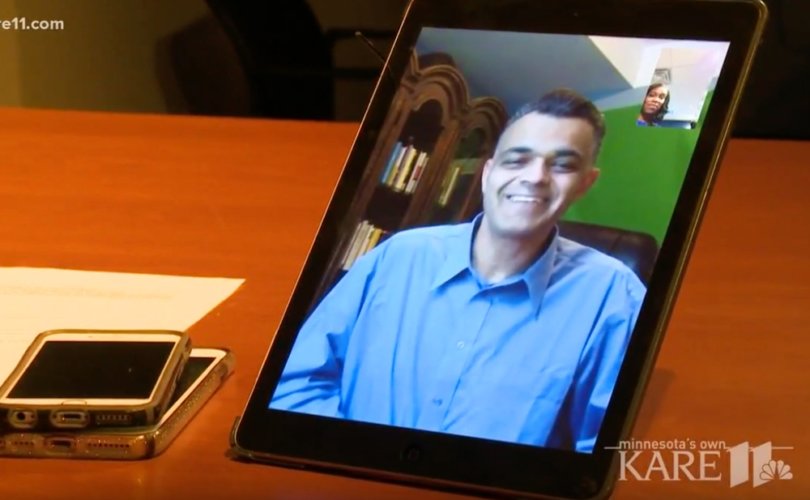 MINNEAPOLIS, MN, March 27, 2018 (LifeSiteNews) – LifeSiteNews’ John-Henry Westen told a newscaster in Minneapolis that it's “disgusting” and a “shame” that a Canadian-based ice cream chain is misusing the name of Jesus in its company name.

The co-founder and editor-in-chief of the pro-life, pro-family news website was interviewed on NBC affiliate KARE Channel 11 March 26 after an opinion piece and petition LifeSite published on March 23 which highlighted the ice cream chain's “blasphemy.”

“Sweet Jesus,” a Toronto firm that plans to open new branches in the United States, exploits obviously Christian themes and imagery in its marketing, combined with other symbols some believe are satanic.

“It is a shame — especially for me as a Canadian — a real shame that this comes from Canada,” he continued, “this crass use of bashing Christians as a way to make money.”

The ice cream company claims it does not mean to “offer commentary on anyone’s religion.” However, one of the company’s tongue-in-cheek posters encourages customers to “Eat like its your Last Supper.” Another reads “Everyone has a cross to bear. Yours won’t be hunger.” These are obvious tongue-in-cheek references to Christ’s Passion.

Speaking via Facebook in his office in Ontario, Westen told KARE 11 that the Commandment in question is “Thou shalt not take the name of the Lord thy God in vain.”

His interviewer, Adrienne Broaddus, noted that some locations of the chain use inverted crosses for the “T” in the word “Sweet” and ice-cream cups emblazoned with the same symbol, and that it had another ice-cream cup with “what some believe are photos of vampire teeth.”

But Minnesota radio personality Roshini Rajkumar, who said that she “happens to be a Catholic,” said during the same show Westen was on that she does not find Sweet Jesus’ choice of name and marketing materials offensive.

“I have a pretty high tolerance for things,” she said, and noticed that in the “very saturated” ice-cream market, a business often needs “to raise some eyebrows or do something a little differently.”

Rajkumar holds an undergraduate degree from the Catholic Boston College.

Westen was saddened that a professed Christian would be so cavalier about abuse of one of the Ten Commandments.

“It’s so sad,” he said. “I wish particularly in this Holy Week, when Christians are celebrating the resurrection of Christ on Sunday, that [Christians] would take seriously the Third Commandment, … the need not to take the name of the Lord in vain.”

Westen’s interviewer noted that the company has 114,000 Instagram followers. Online critics of the ice-cream are divided on the taste of Sweet Jesus’ ice-cream but agree that it makes for impressive photographs.

Westen stated for this report that he thought the young man meant that in 2018 “nothing seems to be beyond the pale” and that this use of Christ’s name to peddle sugar is something new.

“It is mocking Christians for profit,” he said. “It shows a shocking lack of decency and class.”

Westen pointed out that although Canadians are being asked to guard their words these days, it’s open season on Christians.

“It shows how much of a double standard is at play in our culture,” he said, “when we can’t even say mankind for fear of offending our Prime Minister – who insists we use ‘humankind’ – and yet  we can mock the God of Christians without consequence.”

‘It’s crass and cowardly since [the business owners] would never do it to Muslims,” he added.

Westen also took aim at Christians who have forgotten that “at the name of Jesus every knee shall bow” (Phil. 2:10).

“In this week when Christians commemorate the death Jesus suffered so we could have eternal life, cannot Christians at least have the courage to stand up for His Holy Name?” he said.