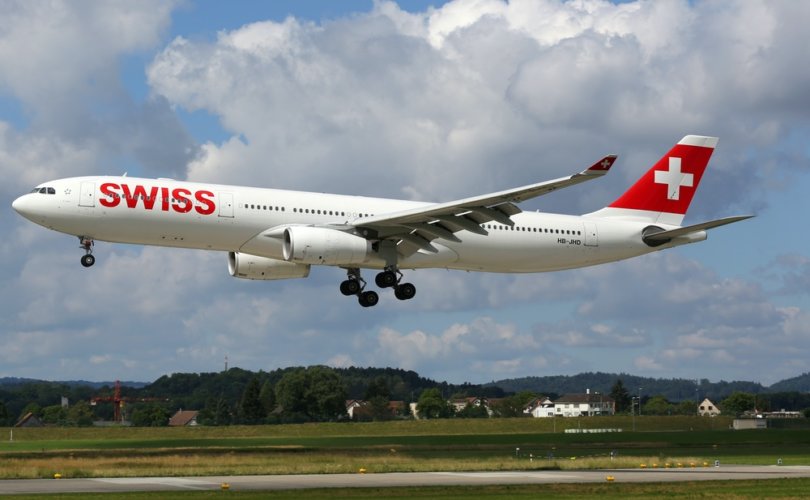 For more than 10 years, Läderach had supplied the airline with small boxes of chocolates that were given to some passengers as a token of appreciation.

Following months of negative headlines, Swiss Air Lines decided to cut ties with the chocolatier that recently has expanded into North America, running stores in both New York City and Toronto. Sweets made by Läderach will be phased out by April 2020, the airline announced.

According to an article published by Swiss magazine “Beobachter,” the airline has a significant number of homosexuals among its employees.

Jürg Läderach, owner of the chocolate manufacturer, is the president of “christianity for today” (cft), an evangelical organization based in Switzerland. CEO Johannes Läderach also serves on the board of cft.

Among other things, cft is one of the sponsors of the March for Life taking place in different locations in Switzerland every year. Last year, more than 1,200 pro-lifers marched in Zurich, the largest Swiss city.

On their website, cft emphasizes that the family – consisting of a man married to a woman, as well as their kids – constitutes the foundation of an intact society, especially if that relationship is nourished by the Bible.

Additionally, cft advocates for the protection of life from conception to natural death. The organization calls for Christian values to be instilled in children. Parents, cft explains, are the primary educators of their children – a fact which schools are to take into account.

In October, left-wing activists had attacked a Läderach store in Basel, Switzerland, using butyric acid. The strong smell of the acid may cause irritation of the respiratory system, as well as nausea and vomiting. Following the attack, the store in Basel had to close for two days. According to a report by German newspaper “Junge Freiheit,” vandalism took place at seven individual stores.

In December, homosexuals were standing in front of another store, hugging and kissing each other.

A group of young socialists had called for a boycott of Läderach.

In Germany, one of the main homosexual lobby organizations had stated, “One way of protesting would be, for example, if hotels or restaurants decided to eliminate Läderach’s products from their range of goods and clearly mark the reason.” Only a few days later, Swiss Air Lines decided to do just that.

Johannes Läderach, CEO of the chocolatier, commented on the boycott in an interview conducted in December, “The business in Switzerland will still grow in 2019, but we have customers who no longer buy from us. However, new customers came into the store, who were sorry to see a conflict being played out on the back of the employees.”

The young CEO denied being against homosexuals or women. “We have homosexuals working for us, too. We don't ask them. I attended a gay network event because I wanted to hear what the LGBTQ movement has against Läderach. There I explained that I may have a different opinion on same-sex marriage [sic] or on the question when life begins. But this does not mean that I have anything against homosexuals. Läderach has a zero tolerance for discrimination.”

When cft was celebrating its 25th anniversary in 2017, Jürg Läderach said, speaking of its history, “In the 1990s, the general moral decline continued practically worldwide. A small group of young men and women felt compelled to stand up for Christian values in politics and society.”

The founders of cft saw, Läderach continued, “the necessity of representing biblical values in a non-partisan and non-denominational way. For this purpose they founded ‘christians for truth.’ Originally started in South Africa, the association spread to Europe, where in 1992, almost simultaneously, organizations were founded in Germany, France, Belgium, the Netherlands and also in Switzerland.” The organization was recently renamed “christians for today.”