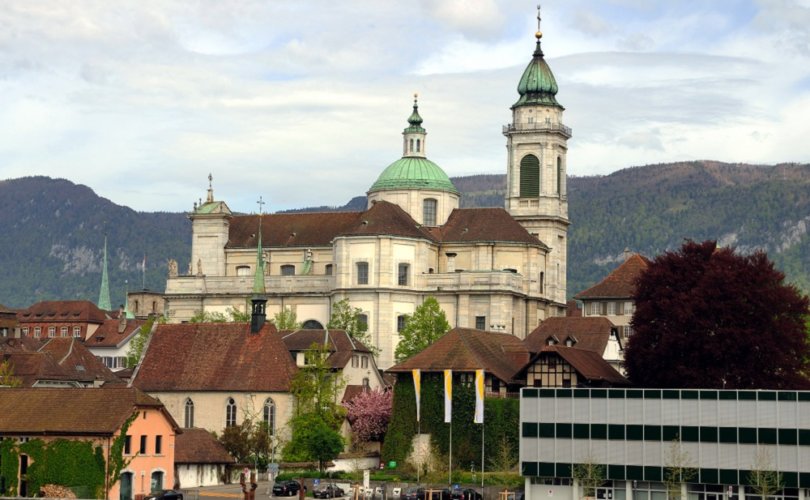 September 11, 2019 (LifeSiteNews) — The Catholic diocese of Basel has applauded current initiatives in Switzerland to legalize same-sex civil “marriage.” Official spokesman Hansruedi Huber was quoted on August 30 by the Luzerner Zeitung as saying the diocese supports the efforts of the Swiss National Council in that direction. Huber also made clear, according to the press article, that the diocese is not opposed to a form of blessing for same-sex relationships.

Huber’s words were a reaction to the debate presently dividing Swiss society after the Swiss National Council’s legal commission’s February decision approving the possibility of a same-sex civil “marriage” law by 19 votes to 4. On that same August 30, the legal commission approved same-sex “marriage,” rejecting by a single vote, however, aims to allow lesbian couples to obtain sperm donation. The draft law is expected to be examined by the Swiss Parliament during its next term. Reformed church leaders will meet in November to discuss the issue and remain divided, although the Swiss Protestant Churches Federation’s president has shown himself clearly in favor of the new law.

Now a part of the Catholic Church in Switzerland also appears to be leaning more and more heavily in that direction.

“We welcome the planned regulations that provide homosexual partnerships with stable and reliable legal security. It is important to us that children who grow up in same-sex partnerships are given a legal framework that serves the welfare of the child,” Hansruedi Huber of the diocese of Basel was quoted as saying.

At present, Switzerland already recognizes same-sex civil partnerships with legal, fiscal, and patrimonial rights that guarantee same-sex couples a status almost equivalent to civil marriage itself, apart from filiation rights. Registered partnerships do not allow for adoption. Present efforts to go a step farther would include legislating on filiation rights, so what is Huber actually “welcoming” if not a push to make “homo-parenting” legal?

The Luzerner Zeitung article does not speak of possible reservations Huber may have expressed regarding same-sex parenting itself. In the present media context, it would probably have quoted them and offered comments. Instead, it shows a high-ranking Catholic representative of the largest diocese of Switzerland as sympathetic to homosexual couples with children.

Huber is even quoted as having merely answered, when questioned about the diocese’s judgment on special blessings for same-sex couples: “These must differ in content and form from the church wedding.”

This was apparently not quite enough for the Luzerner Zeitung, which concluded its story with the remark, “how big this difference should be is obviously not clearly regulated.” It added: “When a parish priest in Uri blessed a lesbian couple in 2014 — with rings and witnesses — he was asked by the then bishop of Chur to resign. The Council of Churches and large parts of the parish gave the parish priest their unconditional backing. After the priest had promised the bishop to refrain from such blessings, he was able to keep his position.”

But the diocese of Basel’s support for the LGBT cause in general is clear enough. New Ways Ministry, the LGBT-friendly purportedly “faithful Catholic” pressure group that in its own words “educates and advocates for justice and equality for lesbian, gay, bisexual, and transgender (LGBT) Catholics, and reconciliation within the larger church and civil communities,” was quick to report on Huber’s declarations under the title: “Largest Swiss Diocese Endorses Civil Marriage Equality, Blessings for Same-Gender Couples.”

New Ways applauded the statements as “the latest step in the German-speaking church’s ongoing progress towards LGBTQ equality.” It also recalled that Bishop Felix Gmür, who heads the diocese, said last April that while a clear difference between sacramental marriage and same-sex partnerships should be preserved, it is a task for the universal church “to find meanings for these relationships as well.”

Felix Gmür, who was ordained a bishop in 2010, has become well known in gay activist circles for publicly setting up “Rainbow Pastoral Care” in his diocese in 2017. The Regenbogenpastoral’s presentation on the Basel diocese official website makes clear that the initiative wishes to respond to Pope Francis’ calls against “discrimination”:

Pope Francis has repeatedly spoken out against discrimination against people with a different sexual orientation. The diocese of Basel wants to improve its pastoral care for these people. The Rainbow Pastoral Working Group, founded by Bishop Felix Gmür in 2016, came into being on request and in cooperation with committed lesbians, gays, bisexuals, trans*persons and intersexuals (LSBTI). This working group wants to better understand the reality of life of LSBTI people, create places of ecclesial encounter and accompany LSBTI people with their relatives in a spiritual way according to their needs. The working group also advises Bishop Felix in the area of rainbow pastoral care.

In another rainbow flag–illustrated article on the diocese’s website, “Rainbow Pastoral” expands on its mission without a single mention of Church doctrine on sexual morality and in complete acceptance of the language of gender ideology:

Greater than all else is love: we all want to be accepted — regardless of whom we love and how we identify. We are part of the great diversity of being human. Whether we are homosexual, bisexual or heterosexual, whether our gender is unique or not, and whether this gender attributed to us at birth is really ours or not — we all wish a fulfilling life. Life in abundance was promised to us. That’s where we’re on our way together.

It goes on to say that “transgender refers to persons in whom the gender attributed at birth to physical characteristics does not match the gender identity. The star stands for all variants of being trans.”

It also claims that the working group includes pastoral workers, counselors, and adult educators, both male and female, as well as people who are attracted “to people of the same sex and/or people of the opposite sex.”

Another article on the diocese’s website addresses the issue of a “gay theologian” living in a registered partnership who was denied a “missio” (an official mission order) by Bishop Gmür in June 2017 to work in a psychiatric clinic. Christian Leutenegger, the “Catholic” theologian, reacted by sending an angry public letter to the press in which he claimed: “If someone unofficially lives with his partner, he gets the mission. But whoever is honest and gives his partnership a binding and official framework runs aground in the ecclesiastical profession.”

At the time, Hansruedi Huber spoke of a tension between ecclesiastical norms and the recognition of homosexuality in today’s society, according to the Basel diocese website. “Bishop Felix Gmür laments this gap. Our bishop is very concerned about the further development of the church. This is also shown by the emergence of the ‘rainbow pastoral,’” Huber indicated. According to the article quoted by the website, the bishop faces the issue of “a lack of scope.” “He may support certain changes in norms, but he still has to guarantee the applicable ecclesiastical law,” it claimed.

Huber also made a parallel with female priests in the wake of the Leutenegger affair: “In the diocese of Basel, for example, there are women at all management levels. The fact that there are still no priestesses, is not ‘deceptive advertising,’ but simply an ecclesiastical process which is not yet complete.”

As to Bishop Gmür, he was, according to “Voice of the Family,” one of the three Swiss bishops who attended a “Shadow Council” held in May 2015 at the Jesuits’ Gregorian University in view of the second Synod on the Family in October of that year in order to promote a revised morality, where extramarital relationships and remarriage after the divorce from a legitimate partner, use of contraceptives, and homosexual acts would be seen under a potentially more positive light.