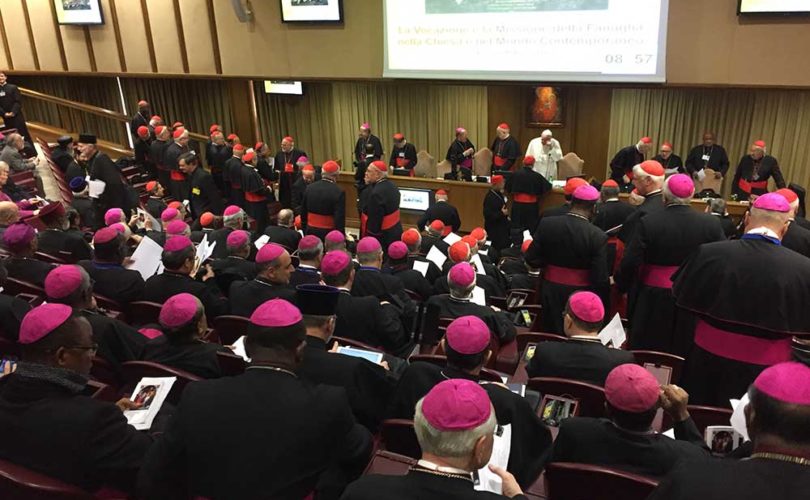 January 16, 2019 (LifeSiteNews) – A petition launched today asks the heads of the bishops' conferences worldwide — who will be meeting in Rome next month with Pope Francis — to take the necessary steps to stop homosexual networks in the Catholic Church, especially the networks that are connected with the clerical abuse crisis and that have recently come to light.

Pro Ecclesia, a Catholic lay organization in Switzerland, launched the petition, partnering with LifeSiteNews which releases the English-language version (see here). The petition should soon also be available in other languages such as Italian and Spanish. (If anyone is interested in helping to spread and promote this petition, please contact us here.)

The petition to Stop homosexual networks in the Catholic Church proposes that a set of steps be taken that clearly and unambiguously punish every single priest, bishop, or cardinal who sexually assaults minors, but also vulnerable young adults such as seminarians. It demands that the penalties which were in place in the 1917 Code of Canon Law be reinstated, that is to say, that these clergymen should be removed from office, and should be deprived of financial support and honor. Additionally, there should be a declaration from the Holy Father that any bishop who covers up the crimes of his clergy is also to be removed from his office.

In this way, the organizers of the petition hope to be able to free the Church from homosexual networks –present in all of the world — which bear culpability in the current sex abuse crisis. Cardinals Gerhard Müller, Walter Brandmüller , and Raymond Burke recently pointed out that there is statistically a clear link between the clerical sex abuse crisis and the conduct of homosexuality.

Thus far, these three prelates seem to be in a minority position in the Church, since not even Pope Francis has yet made any such public statement, even though he only recently re-stated that homosexuals should not be ordained as priests.

On the contrary, Pope Francis always claims clericalism is the root problem of the abuse crisis. In his recent letter to the U.S. bishops concerning this topic, he only twice even mentions “sexual abuse,” and both times, he mentions it only after first speaking about “abuse of power and conscience,” thus steering away from that which is at the heart of the matter: the violation of the physical and emotional purity of the young.

Pope Francis' preacher to the papal household, Father Raniero Cantalamessa, just gave the U.S. bishops a one-week retreat, in which he stressed the problem of wealth, but effectively declined to address the larger problem of sexual abuse or homosexuality.

Pope Francis' new editorial director for Vatican media, Andrea Tornielli, even went so far as to claim that the abuses committed by then-Cardinal Theodore McCarrick were not so much about homosexual abuse, but, rather, about an abuse of power.

Cardinal Reinhard Marx, one of the remaining members of the C9-Council of Cardinals counseling the Pope, recently stated that Pope Francis sees the main cause of sexual abuse to be in the “abuse of power.” He also indicated that this understanding will guide the direction to be taken during the upcoming three-day Rome gathering in February 2019. Marx himself explicitly rejected the claim that there exists a link between homosexuality and the clerical sexual abuse. He said, moreover, that he is disturbed about “forces who think that, if we had no homosexual priests anymore, the whole abuse problem would be solved.”

Many lay Catholics, however, are very troubled by such clerical statements, also because it is about their own beloved children who might be at risk of being sexually abused, and they are determined to see the Church address – and root out – the underlying problems of homosexual priests in the Catholic Church. In past centuries, the Church always has forbidden the ordination of homosexual men – and this has been, it seems, re-affirmed in 2016 under the papacy of Pope Francis. In the older 1917 Code of Canon Law, the Church very strongly punished those priests who either committed the crime of sexual abuse or who practiced homosexuality.

As Dr. Anna M. Silvas – one of the co-sponsors of the petition – points out, it is not the first time in the history of the Church that there has been a homosexual problem in the Church, where some bishops even covered up for their own homosexual priests. In the 11th and 12th century, for example, after “Peter Damian’s blazingly prophetic the Book of Gomorrah,” it was often lay people that worked for a purification of the clergy, she explains. The Fourth Lateran Council (1215) and its canon 14 robustly addressed this problem by even punishing those bishops involved in cover-up. She comments: “We might ask whether a repristination of Canon 14 of the Fourth Lateran Council is now in order, to the effect that not only guilty priests and others, but bishops and ordinaries themselves who have demonstrably covered up sexual abuse by clergy and church workers, whether of children, of adolescents, of vulnerable young adults, or of ‘consensual’ adults, be deposed from their office.”

In light of the current deep and painful crisis, the organizers of this petition see that it is time to return to the older discipline, for the protection of the vulnerable young entrusted to the priests of Christ. As the President of Pro Ecclesia, Herbert Meier, states: “Now is the time when the wheat is being separated from the chaff.  And everybody can decide for himself whether he wants to be wheat or chaff.”

To: Their Eminences, Their Excellencies, and Participants of the Meeting of Bishops on Sexual Abuse

We, the undersigned signatories, are in great distress about our Mother Church.

The unholy predatory conduct of a far-reaching network of persons who are exercising sodomy in the Church and who support a “homosexual culture” is coming to light with increasing intensity.

With 80% of the victims of clerical sexual abuse being male adolescents, it is clear that they are victims of homosexual abuse, and not just pedophilia. All of this is having a tremendously damaging effect upon the honor of the Catholic Church and her members and is estranging many people from the Faith.

Therefore, we ask you to support the following:

Together with you, we wish to work for the establishment of a movement at all levels of our Church that has the courage and the strength of Faith and true Charity to resist surrender to the Zeitgeist, capitulation leading to the decay of moral standards, and practical espousal of the culture of death.

We pledge our daily prayers for the achievement of the above goals. We pray earnestly that you, the Successors of the Apostles, may be strengthened to fight this good fight with the holy zeal of the Apostles of old. We beseech Christ the Lord Himself, Whom each cleric is called to emulate, to guide and protect you in your shepherding of His Flock, and the protection of innocent youth.