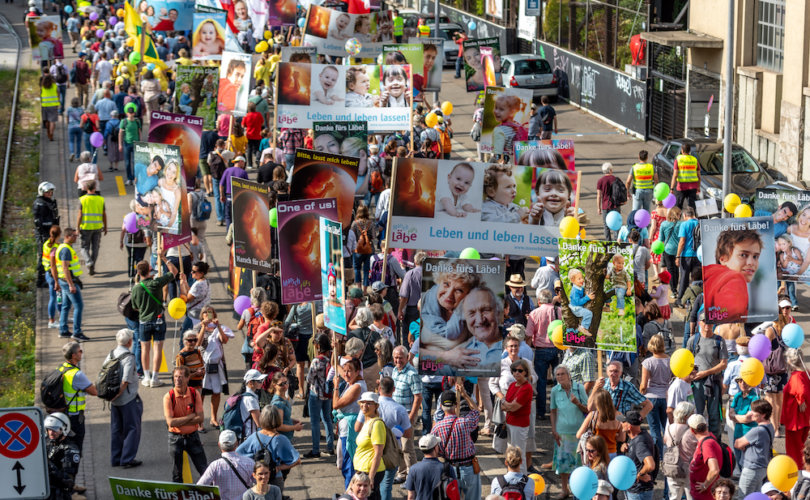 SWITZERLAND, September 29, 2020 (LifeSiteNews) – Switzerland’s March for Life was unable to take place as scheduled on Saturday, September 19 because of the threat of violent pro-abortion counter-protestors.

Following the Zurich police’s ban of the 2020 March for Life on the streets, the organizers booked a private conference location (Gate 27) near Zurich in the city of Winterthur. But in early September, Gate 27 canceled the event after the police warned of a large and violent attempt to block the event.

As early as July 2020, Winterthur police informed the Swiss March for Life Committee and the Gate 27 management that a violent mobilization was planned, aiming to prevent the march from taking place. The police recommended that Gate 27 cancel the event. Pledging private security for the three nights prior and insurance for possible damages, Gate 27 continued to allow the event.

On September 1, Winterthur police informed the Swiss March for Life committee and Gate 27 that an estimated 400 to 1,000 people were expected to attempt to block the event.

Their plans were published online: gather two hours ahead of the March for Life’s start, then move to Gate 27’s entrance to block participants from entering.

For the participants’ safety – most of whom are families and children – the police would have to seal off the conference center with the largest police force ever deployed in Winterthur.

Following the police’s dramatic description of the expected violence and serious risks, the conference center decided to not allow the Swiss March for Life to take place in their venue.

Some concern was warranted. Counter demonstrators lit barrels on fire during the 2019 March for Life in Zurich. Following the release of the March for Life announcement in July, a partner organization found an animal carcass and maggots in its mailbox.

However, the March for Life criticized the police for recommending that Gate 27 cancel the event in a German press release on September 4, 2020: “The police have always been able to fend off the violent left-wing extremist attacks in Zurich and Bern in the course of the last few years. This would also have been possible in Winterthur in 2020.”

Receiving hundreds of registrations from those attempting to thwart the event (including emails and mailing addresses), the March for Life was able to warn the police of possible offenders. March for Life organizers believe the police should have investigated these likely offenders as well as the criminals arrested in 2015 and 2019 during the Zurich March for Life. They also believe that police could have created a larger security zone around the event location, only allowing legitimate participants to enter (as the police did in 2018 in Bern).

“The fears of those responsible at Gate 27 of possible damage to buildings and unpleasant restrictions are partly understandable. Nevertheless, the organizers of the March for Life are disappointed that threats of violence from left-wing extremists lead to such cancellations.”

Due to the location cancelation, the March for Life went virtual. The president of Winterthur's municipal council, Daniel Oswald, spoke at the online event. He expressed his deep regret that the City of Winterthur had not been able to create the conditions necessary for the meeting to take place within the usual, planned framework.

“The situation clearly shows that freedom of expression and freedom of assembly is no longer guaranteed everywhere in Switzerland. This results in a need for action. The monopoly on the use of force must be returned to the state,” Oswald emphasized.

In last year’s ruling, the court declared that the fact that violent counter demonstrators were to be expected did not justify such a restriction of freedom of opinion and assembly and that a demonstration march had to be permitted.

“The strength of the people is measured by the well-being of the weak,” states the preamble to the Swiss Federal Constitution. The March for Life, to which multiple Swiss organizations and associations belong, calls “to help the weakest among us, the unborn child.”