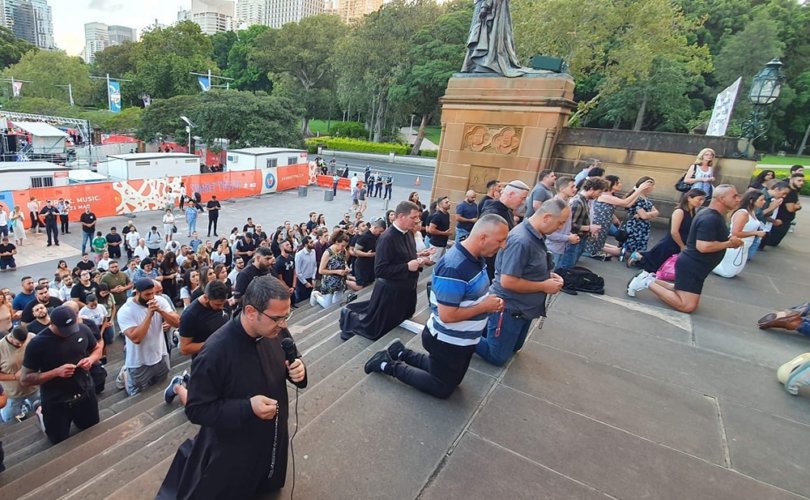 SYDNEY, Australia, February 24, 2021 (LifeSiteNews) — Over 200 Catholics gathered on the steps of Sydney’s cathedral to pray on their knees and sing hymns in reparation for a “Live N’ Queer” LGBTQ variety show being held just outside the cathedral this past Saturday.

The LGBTQ event was held immediately in front of St. Mary’s Cathedral, on a large open forecourt owned by the City of Sydney. The event was part of a series known as “Heaps Gay,” created for the “queer” community. Its performances range from regular folk and pop music numbers, to lewd onstage acts.

Sydney Catholics, including Archbishop Anthony Fisher, OP, were dismayed upon discovering both the close proximity of the show to the cathedral, and the use of the cathedral image in advertising for the event.

Archbishop Fisher publicized on Facebook his request to the City of Sydney to have the Cathedral image removed from the advertising of the event. The request was later granted to “avoid any confusion,” according to a City of Sydney spokesperson. However, the City of Sydney defended the performance along with the entire Sunset Piazza concert series of which it was a part.

In fact, the City claimed that they had consulted representatives from the cathedral and that no objections were made. “In the lead-up and throughout the staging of the Sunset Piazza concert series, the City consulted and liaised closely with St Mary's Cathedral representatives,” the spokesperson said.

“It is frustrating and upsetting that St Mary’s Cathedral, the mother church of Australia, has been used so provocatively to promote this event and such little sensitivity shown to people of faith,” protested Archbishop Fisher in his post. “In this great season of Lent, we need to pray to ask the Lord that in our great and ‘tolerant’ city of Sydney, that religious belief will be respected and protected and that we will all rediscover an appreciation for what is sacred.”

One Benedictine Catholic priest who participated in the public rosary described the affront this way: “If you’re trying to explain this to someone who doesn’t believe in God, who thinks, ‘Why are these people getting so upset?’ It’s like, let’s say I have my mother and it’s her grave. And you know that grave is important to me, or that site is sacred to me, or something I find very special.”

“And also they know that it would hurt you a lot if they did this thing in that area, or near to there,” he continued. “To me it seems like more of an offense on their part for them to go ahead and do it anyways knowing that it’s going to cause offense, and knowing that it’s going to hurt you. If they don’t know that, then obviously it’s not [the same], they just don’t know. But I find that hard to believe in seeing a lot of times the vehemence and rage that you even see on their side towards the Catholic Church.”

Catholic Sydney resident Charlie Bakhos responded by organizing the public prayer on the steps of the cathedral on the night of the Heaps Gay show, even as Bakhos was in Lebanon. In a video he posted on a “Christian Lives Matter” Facebook forum, he lamented the use of the cathedral image on the Heaps Gay flyer.

“To me, it’s a like a big mockery to the Catholic Church, and to Christianity in general,” said Bakhos. “I call every Christian in Australia, in Sydney, and around the world. I’m calling everyone to pray the rosary, be peaceful, don’t cause any trouble. Through prayer, anything can be solved through Jesus Christ.”

An online petition was also launched, protesting both the use of the St. Mary’s Cathedral image to advertise an LGBT show, and the close proximity of the LGBT show to a Christian church.

The evening of the Heaps Gay show, hundreds of Catholics, along with a few traditional Catholic priests, gathered on the steps of St. Mary’s Cathedral to pray the rosary on their knees.

One show performer thought the group was “trying to drown out the music with hymns,” according to PEDESTRIAN.TV. “You could definitely see and hear the Christians,” they said.

Many Australians — including an overwhelming number of commenters who criticized Archbishop Fisher’s Facebook post — perceived the objection to the concert’s use of the cathedral for advertising, and the show’s closeness to the church, as hateful and prejudiced.

One Facebook user commented, “How very inclusive of you. Great to see you respecting others, showing compassion…oh wait, you did the very opposite…shame on you Anthony!”

— Article continues below Petition —
Jesuit Order: Censure James Martin, SJ, for offending Poland by blaspheming the Black Madonna
Show Petition Text
22587 have signed the petition.
Let's get to 25000!
Thank you for signing this petition!
Add your signature:
Show Petition Text

Another said, “I encourage everyone to give up prejudice and hate for Lent this year, who knows, maybe you’ll stay like that forever too!”

Sydney Lord Mayor Clover Moore told The Sydney Morning Herald ahead of the protest: “There is no place for hate, intolerance or the sowing of division. We have made great strides toward equality, but it is sadly clear there is much work left to ensure LBGTI communities live free from discrimination.”

The Benedictine priest who participated in Saturday’s reparation rosary commented on what he described as a misunderstanding of the true Christian position towards homosexuality.

“In the modern world whenever you object to anything that’s against truth, if the opposite person holds to that, they automatically think I hate and detest that person and I want to kill them,” he said.

“The reality is, this is forbidden by God. Nobody’s saying that we have to ostracize the people that fall into this sin. We’re not here to pass judgement on any individual, but only on the ideology of the thing. The main thing we’re there for is reparation and also for praying for the souls that are involved in this, that they may receive the grace of God and be converted.”

“But if nobody tells them or lets them see that this thing is offensive to God, then we’ll be guilty of the sin. And not only that, if we don’t make reparation for other sins, then we’ll receive a chastisement, because we know better,” he continued.

“The founder of the congregation that I’m from, he said that the Christian sweetness is the surest way of bringing souls to God. And any of us that have ever had an altercation with somebody — the minute that you bring hostility is the minute it’s over,” the priest explained.

“Nowadays, we have to have so much compassion for these people. Just starting out, compassion. Nowadays, and it’s getting worse, in the public school system, in the world, everything is programming them. They don’t have religion, they come from a broken home, they’re taught all kinds of just screwed up stuff in school about sexuality and now they don’t even know what gender they are, and they’re taught that from the youngest age possible.”

The priest went on to describe a Focus on the Family radio segment by Dr. James Dobson, that featured the story of a boy struggling with same-sex attraction.

“[The boy] was terrified, and he didn’t know what was going on, and he was confused, and a lot of times made fun of because of the way that he is. In a certain way, what do you expect them to do, as far as going to other people who are like them and saying, ‘I’m staying here because at least they’re kind to me.’ When I read that, it was an eye opener that a lot of these people are in so much pain.”