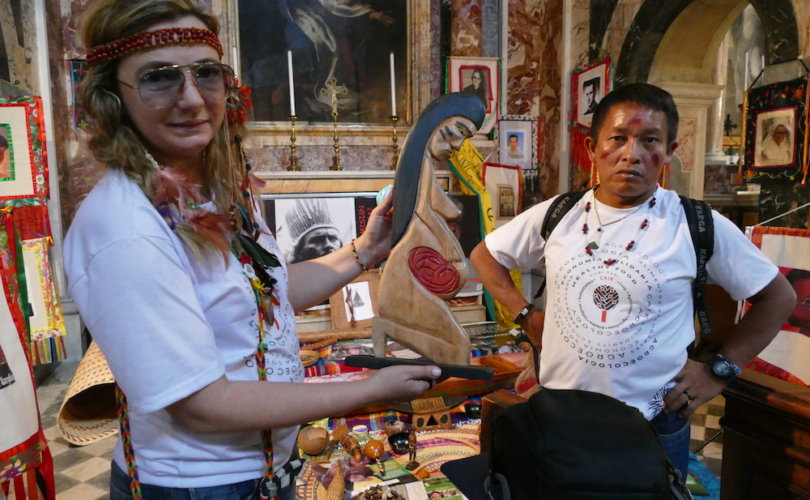 ROME, October 21, 2019 (LifeSiteNews) — The precise identity of the mysterious carved female statue used in a ceremony in the Vatican Gardens is still unknown as the Vatican insists it signifies “fertility and life,” while volunteers where the statue is on display describe it as “Mother Earth” and “Pachamama.”

In response to a question from LifeSite at Friday’s synod press briefing, Paolo Ruffini, president of the Amazon synod’s information commission, reiterated that he believed the unclothed pregnant female statue, which indigenous people also carried in procession into St. Peter’s Basilica and has appeared frequently during the synod, represents a “symbol of fertility and life.”

He also repeated his prior warning against seeing “evil where there is no evil.”

But despite having promised two days earlier to confirm exactly what the statue meant to the artist or to the Pan-Amazonian Ecclesial Network (REPAM), the network tasked with planning and executing the synod, Ruffini declined to do so.

Vatican spokesman, Matteo Bruni, asked Mauricio López Oropeza, executive secretary of REPAM, who was also on Friday’s panel, to comment on the statue’s meaning, but López shrugged off the question.

The precise meaning of the statue is of concern to many Catholics because if it represents an idol of some kind — which is possible, especially given that indigenous peoples appeared to bow down around it during the Oct. 4 prayer ceremony in the Vatican Gardens — then it would go against the First Commandment.

To find out how the mysterious statue is being described to visitors at the Santa Maria in Traspontina Carmelite Church just down from the Vatican, where several of them are on display at side altars, LifeSite paid to a visit to the Church on two separate days.

Urge the Vatican to remove all 'pagan' symbols at the Amazon Synod. Sign the petition.

On our first visit, a volunteer (pictured below) said the carved image “represents the revelation of the feminine mother with mother nature, which gives us nourishment.”

Asked if it is the Pachamama, she said: “Yes, the mother, who cares for life, who gives nourishment to life, so it’s a very strong form of symbolism.”

“The indigenous see the presence of God in everything,” the guide explained. “So if they cut down a tree for some purpose, they cry, and ask for forgiveness from Mother Earth, because they have to cut down that tree.”

“The [carved] mother that I brought from Brazil … that was in the procession, well, we brought it from Brazil. It was done by an indigenous artist, and we asked him for a piece of art that would symbolize all of that connection of Mother Earth, of women, the feminine aspect of God, that God is the one who protects and nourishes life,” she said.

Pointing to the poster of an indigenous woman breastfeeding an animal, also on display at a side altar in the Carmelite Church, the guide then explained that the people had killed the animal’s mother to feed the community. “Suddenly they saw that she had a little child, so the mother of the community, who is breastfeeding, has to care for [the small animal] as if it were her child.”

On our second visit, we asked several volunteers and participants about the statue’s meaning.

An Italian missionary sister told us that the statue is a figure of life, but also that it’s a symbol of “Mother Earth” and the “Pachamama.”

Suggesting a possible meaning of the prostration around the statue during the ceremony in the Vatican gardens on Oct. 4, the Italian religious said she has been struck by the fact that, at daily prayer meetings in and around the Traspontina church, the indigenous people “greet and ask the Earth’s permission” before and after prayer “since they receive their life from her.”

She also noted that most of the prayer services that have been held in or around the Carmelite church have been dedicated to the “martyrs” of “justice” and “the land,” whose pictures surround the statue at a side altar.

Two other volunteers concurred that the statue represents “Mother Earth” and “Pachamama.”

Two gentleman we asked seconded Paolo Ruffini’s belief that the statue is merely a symbol of “life.” But when we mentioned to one of them that several other volunteers had identified the statue as the “Pachamama,” he paused and said that of course people have “different interpretations: some life, others the Pachamama and some even call it the Virgin Mary.”

But according to one Brazilian volunteer taking part in the REPAM-sponsored Amazon synod events at the Carmelite Church, “it’s not about religion. It’s about politics.” When asked why he would say this, the man responded: “Because I am a Communist.”

An anthropologist weighs in

An anthropologist who spoke to LifeSite on condition of anonymity said that, in his view, the mysterious statue is an “idol invented for the Amazon synod,” and is devoid of both history and culture.

He explained: “The Pachamama is a divinity linked to the Incan civilization, historically venerated by the peoples who inhabit the Andean plateau (Aymara, Quechua). It is considered the goddess of nature, land, agriculture, fertility, etc.”

“Of course, her cult varies according to ethnicity and for each of them over the centuries has assumed specific meanings and rituals not summarized to a single religious entity,” he added.

“For centuries, these cults intersected with the Catholic ones and were venerated in parallel with the Christian ones,” he also noted.

The anthropologist said that, in his view, the statue displayed at the Carmelite Church “technically constitutes a sort of ‘Amazonian’ transposition of those complex specificities; a variation on the theme or, even better, a sort of trans-American syncretism in which Andean, African-American and New Age elements converge.

It is “an idol invented and iconographically ‘camouflaged’ as ‘Amazonian’ (facial painting),” he said, adding that he believes they are being used in Rome “as an instrument of political and religious pressure.”