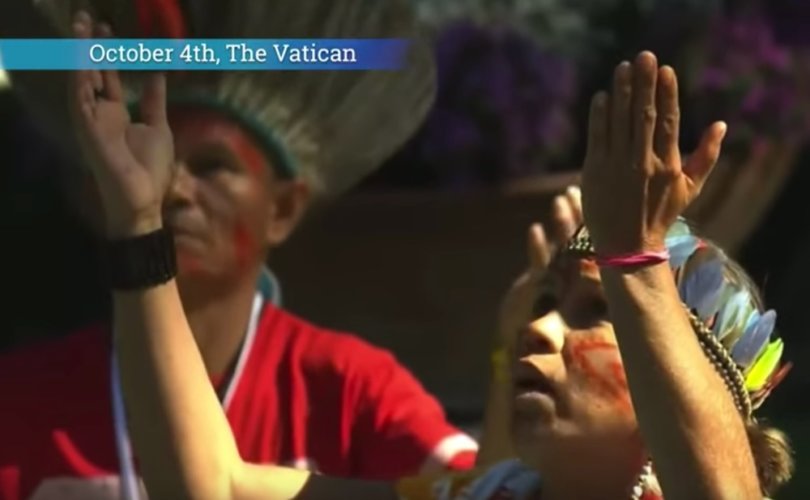 VATICAN CITY, October 15, 2019 (LifeSiteNews) ― The synod is discussing the possibility of adding indigenous symbols and rituals to the Roman Rite as it is celebrated in the Amazon region.

At a press conference today, two bishops responded to a question by Fr. Thomas Reese, SJ of Religion News Service, about a proposal for an “indigenous rite” for the celebration of the Eucharist and the other sacraments.

Bishop Rafael Alfonso Escudero López-Brea, the Spain-born Bishop Prelate of Moyobamba in Peru, said that there has been talk of adding “some symbols or some rituals” that do not “affect what is essential of the Eucharist.”

“The synod is discussing the inculturation of the liturgy,” he said.

“This is not to seek a liturgical rite distinct from the one that the Church has, but, rather, the Church has received from the Lord and the Apostles what is essential of the Eucharist and throughout history, that nucleus, the essential, has continued to develop with complementary rites,” he continued.

“When this possibility is discussed, there is talk of introducing in the celebration of the Eucharist some symbols or some rituals that do not affect what is essential of the Eucharist. Otherwise we would be spoiling the Sacrament and contradicting revelation.”

Escudero Lopez-Brea suggested that the Eucharist can be “enriched” by Amazonian customs, “with regard to ornaments,” so that “among Amazonian people they can celebrate the Holy Eucharist with their own special characteristics.”

The bishop defended the idea by pointing out a multiplicity of rites in the Catholic Church, as well as liturgical inculturation in Africa.

“This would be nothing new in the Church,” he argued.

“When we study the history of the Church, we see that before everything was unified in the Latin rite, there existed a multiplicity of rites in particular places. That is the input.”

Bishop Eugenio Coter, the Italian-born Apostolic Vicar of Pando and Bishop of Tibiuca in Bolivia, suggested that sacramentals hold different meanings for Europeans and Amazonian indigenous peoples. His first “simple example” was not so simple, however, as Coter held that European Catholics believe that incense represents our presence before God and the Word of God whereas one of the indigenous people believe it represents their prayers going up to heaven.

In reality, the Traditional Latin Mass quotes Psalm 141: “Let my prayer be directed as incense in thy sight; the lifting up of my hands, as evening sacrifice,” and thus traditional Catholics throughout the world also believe that incense represents a movement of prayers “upward” towards God.

Coter also suggested that the beating of the breast, as is traditionally done in the Latin liturgy, is a sign of arrogance in Japan.

Liturgical historian Dr. Peter Kwasniewski told LifeSiteNews that the problem with inculturated rites is not that they influence incidentals, like the design of vestments, or style of music offered. It is that they can “invade” the Mass itself.

“The problem is when it invades the intrinsic parts of the Mass: the Ordinary and Propers, the chants, the gestures and ceremonies we inherit as a precious patrimony to be shared with all nations,” he stated by email.

“The missionaries always shared this treasure with indigenous peoples in its fullness, and as a matter of historical record, it was the Roman liturgy as such that most impressed the pagans, who had nothing at all like it.”

Dr. Joseph Shaw, the president of England’s Latin Mass Society, also agreed that “core elements” of the liturgy must be preserved from over-enthusiastic “inculturation.”

“The liturgy has taken on aspects of the different cultures in which it is celebrated, notably in the music and in the style of participation of the faithful,” he stated via email.

“What is needed for successful inculturation, however, is stability in the core elements of the liturgy, around which these different cultural expressions can take place, rather than a fluid liturgy which can easily become tainted with liturgical abuses and syncretism,” he continued.

“As Pope Benedict declared in the context of Africa: (Africae munus 37): ‘The Holy Spirit enables the Gospel to permeate all cultures, without becoming subservient to any. Bishops should be vigilant over this need for inculturation, respecting the norms established by the Church. By discerning which cultural elements and traditions are contrary to the Gospel, they will be able to separate the good seed from the weeds’ (cf. Mt 13:26).”

The issue is particularly pertinent regarding the Amazon region, for a number of “Amazonian” symbols and rituals have been displayed to the wider Church during the synod, to the dismay of many Catholics. Among them was a confusing ceremony held before Pope Francis in the Vatican gardens, in which indigenous people and a Franciscan friar prostrated themselves before a few carved figures, two representing naked pregnant women and one a supine male.

In another ceremony, a young woman in a tracksuit was carried through a church in what appeared to be a boat. And in still another, a group of indigenous people and Europeans held hands and sang in a circle around a display in the street that included a photograph of a woman breastfeeding an animal. The same image is currently hanging in the church of Santa Maria in Traspontina in the Via della Conciliazione.

Shaw noted that Evangelicals have criticized the Catholic Church for adopting pagan elements, even as they err in the other direction by forcing their adherents to conform to American customs.

“One of the dangers of undiscriminating inculturation is the reaction against it by many Protestants and Pentecostalists,” he said.

“In Africa they criticise the Catholic Church for allowing pagan elements into worship, and themselves adopt a complete Americanisation of their followers, who for example take on American names and clothing. In the Latin American context, it is even more important not to give ammunition to their polemic against the Catholic Church.”

A Spanish speaking reporter from Catholic Family News, responding to a remark about bilingualism in ministry to and education of Amazonian indigenous people, testified to the ability of the Catholic Church’s ability to unite disparate groups of Catholics through Latin.

I'm from El Paso, Texas, which is in the United States but right on the border. So, my parents are Hispanics and there is a very mixed, very bilingual culture there.

So, we're discussing at the Synod things that we can learn and can be applied universally. My question is: Are you also discussing the possible problems that are seen in bilingual cultures? For me, this is very personal, because…after working in parishes for 15 years … I have seen among the Spanish-speaking community and the English-speaking community, within the same parish, that there are people who get angry.

They say, ‘There’s racism here because they have Mass for you at 9 in the morning, which is better, but there is no Mass for us until 3 p.m. in the church hall. Why do you have priority and we do not?’

It is though we are introducing a fight into our parishes and families our communities because of these issues. So, how are we going to deal with these things? What are the possible solutions? Because we know that people change slowly.

I don’t know whether this will be discussed in the small circles. But has there been talk about using something universal, which we already have, for example, the use of Latin? I have noted in one of these parishes that the community can get together and pray the Rosary in Latin and it doesn't matter whether we speak English or Spanish. So if we use Latin in the Rosary nobody can feel ‘They didn't choose me.’ We have seen tremendous unity in our parishes simply because of something we already have and comes from our tradition.

In response, Paolo Ruffini, the prefect for the dicastery of Communications, said that inculturation was a complex issue, especially as there are so many languages among the peoples of the Amazon. He said that Christians try to understand the languages and cultures of the Amazonian peoples and bring them into dialogue with the Gospel. Ruffini did not indicate that anyone at the synod had proposed Latin as a means to create unity among the disparate community of Catholics in the Amazon.