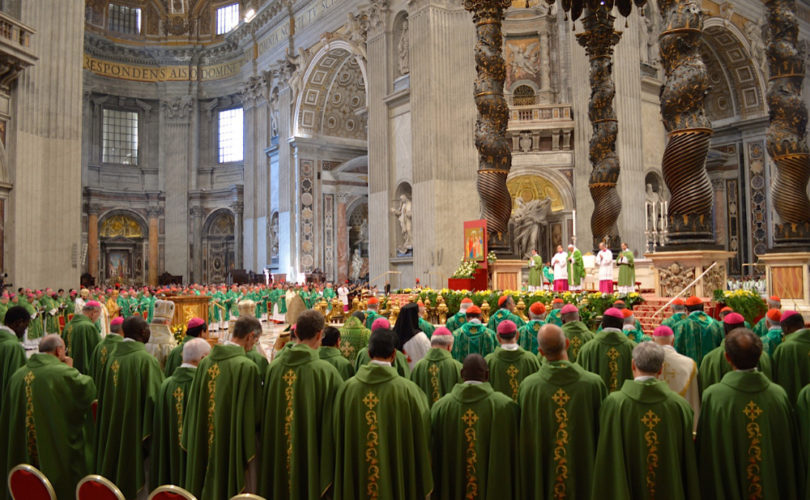 August 13, 2015 (LifeSiteNews) — Voice of the Family, an international lay coalition of major pro-life and pro-family organizations, has warned that the Vatican’s preparatory document for the October Synod on the Family “threatens the entire structure of Catholic teaching on marriage, the family and human sexuality.”  In an extensive analysis of the Vatican’s 77-page document called the Instrumentum Laboris, Voice of the Family points to several areas where the omissions and ambiguity in wording is leading in a direction dangerous to faith and family.

The game plan of introducing ambiguity into the texts was revealed by Cardinal Walter Kasper, the central figure of the Synod who launched the controversy with his proposals for communion for divorced and remarried Catholics.  In an interview with EWTN’s Raymond Arroyo in June he divulged an approach to overcome growing opposition to his heterodox plans.

“I get a lot of agreements, but also a lot of critiques, and there are tensions there,” Kasper acknowledged.  “Now I propose to those who prepare the Synod to prepare a text which can get the agreement of the whole, of the great majority. It’s the same method also we had in the Council.” He later repeated, “My suggestion is to find now a formula where the great majority can adhere.”

The Second Vatican Council was also faced with challenges to traditional Catholic doctrine and practice, which were opposed by large numbers of bishops. Despite this opposition, many items on the agenda of the ultra-liberal bishops were accomplished by the use of often vague, ambiguous and even apparently conflicting language that seem to have appeased both sides. These expressions were later referred to as “time bombs” which some theologians were able to exploit following the council for the purpose of undermining the Church’s traditional teachings.

The Voice of the Family analysis explains “it is clear that the instrumentum laboris fails to clearly affirm Catholic doctrine, but rather, through the use of ambiguous terms, seriously undermines it.”

John Smeaton, co-founder of Voice of the Family, said, “The document undermines the doctrine of Humanae Vitae on contraception.” The 19-page critical analysis of the Instrumentum Laboris written by Voice of the Family’s Matthew McCusker notes that that Vatican preparatory document for the Synod “refuses to use the word ‘contraception’ or make any direct reference to any contraceptive method, despite the devastating consequences of the use of contraceptives in many areas of human life, not least the killing of unborn children by abortifacient methods.”

More than that, the Instrumentum Laboris misrepresents Humanae Vitae by leaving out the fact that it condemns contraception. The Synod document states that the “two principal points” of the encyclical are first about the role of conscience and second “an objective moral norm” without ever defining that moral norm – namely Humanae Vitae declares morally inadmissible “any action which either before, at the moment of, or after sexual intercourse, is specifically intended to prevent procreation—whether as an end or as a means.”

“The Instrumentum Laboris also resurrects the discredited Kasper proposals for Holy Communion for unrepentant adulterers, reduces the indissolubility of marriage to a mere ‘ideal’, and undermines the position of parents as their children’s primary educators,” added Smeaton.

With regard to the Church’s teaching that parents are the primary educators of children, the Instrumentum Laboris suggests otherwise. Paragraph 86 states that “the family, while maintaining its privileged spot in education, cannot be the only place for teaching sexuality.” The Voice of the Family analysis notes the “statement is directly contrary to Catholic teaching,” citing the teaching of St. Pope John Paul II in  his Apostolic Exhortation Familiaris Consortio, where the pope leaves open the possibility that sex education can be done solely in the home.  He wrote: “Sex education, which is a basic right and duty of parents, must always be carried out under their attentive guidance, whether at home or in educational centres chosen and controlled by them.”

“Voice of the Family urges Catholics not to be complacent or give in to a false sense of obedience, in the face of attacks on the fundamental principles of the natural law,” concluded Smeaton. “Catholics have a duty to oppose the direction being taken at the Synod. If that direction is not reversed, the greatest victims will be those who are most vulnerable, especially children, born and unborn.”