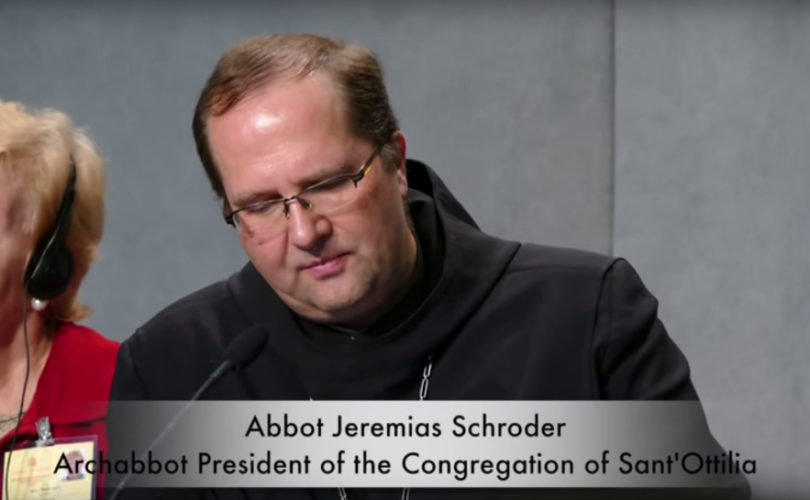 ROME, October 13, 2015 (LifeSiteNews) — The Synod press briefing at the Vatican today featured German Abbot Jeremias Schroder, Archabbot President of the Congregation of Sant'Ottilia. Abbot Schroder said that a majority of the Synod Fathers support allowing different regions to establish their own ways of dealing with contentious issues such as homosexuality and divorce.

Responding to a question about unity in diversity, the Abbot mentioned both “the social acceptance of homosexuality” and dealing with “divorced and remarried persons” as examples “where bishops conferences should be allowed to formulate pastoral responses that are in tune with what can be preached and announced and lived in a different context.”

The Abbot suggested that such a regional approach is supported by a majority of the Synod Fathers. “This has come up many times, many interventions in the aula have developed the topic that there should be a delegation and authorization of dealing with issues at least pastorally in different ways according to the cultures,” he said. “I think I’ve heard something like that at least twenty times in the interventions, whereas only about two or three have spoken against it, affirming that the unity of the church needs to be maintained also in all these regards and that it would be painful to go into such a delegation of authority.”

Philadelphia Archbishop Charles Chaput, who is one of the Synod Fathers representing America, addressed the topic in his remarks at the Synod press conference last Wednesday. Some Church practices can be adapted at local levels, “in dialogue between the Holy See and the local Church,” he said. “At the same time, diversity is always in the service of unity in the Catholic Church.”

So, he continued, it would not be “appropriate for individual bishops’ conferences to decide matters of doctrine. … We have to be very careful of that as we also be careful of respecting the individual character of the local Church.”

Archbishop Gadecki’s Synod intervention: the church cannot bend to the will of man

Statement by Cardinal Pell: Synod Fathers are concerned about conduct of the Synod