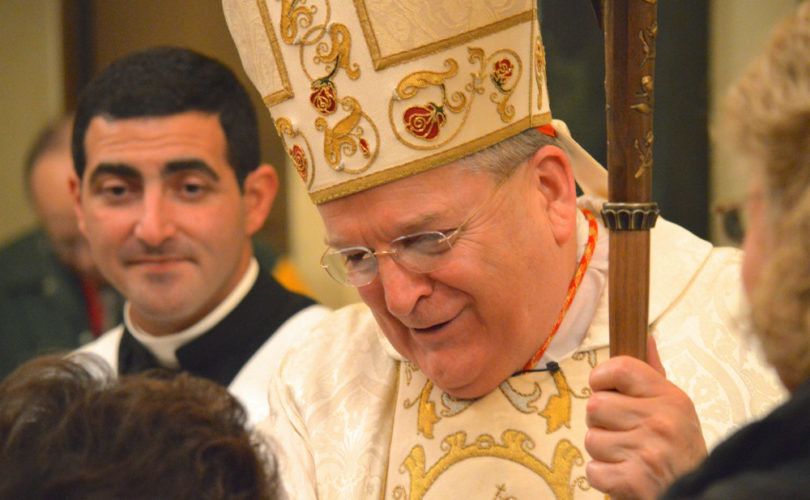 ROME, October 26, 2015 (LifeSiteNews) — Cardinal Raymond Burke is raising serious concerns about the Synod on the Family’s final report, saying it is misleading and lacks clarity on a crucial Church teaching.

In comments to the National Catholic Register’s Edward Pentin, Burke took issue with the section titled “Discernment and Integration” —paragraphs 84-86 — which deals with baptized Catholics who are civilly divorced and remarried.

The section, he says, is “of immediate concern, because of its lack of clarity in a fundamental matter of the faith: the indissolubility of the marriage bond which both reason and faith teach all men.”

“The logic of integration is the key to their pastoral accompaniment, so that they know now only that they belong to the Body of Christ which is the Church, but that they may have a joyous and fruitful experience of this,” an English translation of the report states, adding that pastors must “discern” each case of non-sacramental unions.

Burke told Pentin that “integration” is a “mundane term which is theologically ambiguous.”

“I do not see how it can be ‘the key of pastoral accompaniment of those in irregular matrimonial unions.’ The interpretative key of their pastoral care must be the communion founded on the truth of marriage in Christ which must be honored and practiced, even if one of the parties of the marriage has been abandoned through the sin of the other party.”

“The grace of the Sacrament of Holy Matrimony strengthens the abandoned spouse to live faithfully the marriage bond, continuing to seek the salvation of the partner who has abandoned the marriage union.”

“I have known, since my childhood — and continue to meet — faithful Catholics whose marriages have, in some way, been broken, but who, believing in the grace of the Sacrament, continue to live in fidelity to their marriage. They look to the Church for that accompaniment which helps them to remain faithful to the truth of Christ in their lives,” he said.

When the synod’s report goes on to quote paragraph 84 from Saint John Paul II’s Familiaris Consortio on a pastor’s obligation to exercise “careful discernment of situations” when it comes to irregular unions, Burke called the use of the quote “misleading.”

“While, in no. 84, Pope Saint John Paul II acknowledges the different situations of those who are living in an irregular union and urges pastors and the whole community to help them as true brothers and sisters in Christ by virtue of Baptism, he concludes: ‘However, the Church reaffirms her practice, which is based upon Sacred Scripture, of not admitting to Eucharistic Communion divorced persons who have remarried.’”

“He then recalls the reason for the practice: ‘the fact that their state and condition of life objectively contradict that union of love between Christ and the Church which is signified and effected by the Eucharist.’ He also rightly notes that a different practice would lead the faithful ‘into error and confusion regarding the Church’s teaching about the indissolubility of marriage,’” he said.

Liberal German Cardinal Christoph Schönborn has called the word “discernment” key to understanding the entire final report passage dealing with irregular marital situations, giving weight to speculation that the term will be used to admit civilly remarried divorcees to Communion.

“There is such a thing as objective evil and objective good. Christ said he who [divorces his wife] and marries another, Christ has one word for that action, ‘adultery.’ That's not my word. It is Christ's word himself, who is humble and meek in heart, who is eternal truth. So, he knows what he's saying.”

“That's the case where St. Paul said, ‘let the person examine himself; he who receives unworthily receives judgment against himself.’ That is very severe,” he said.