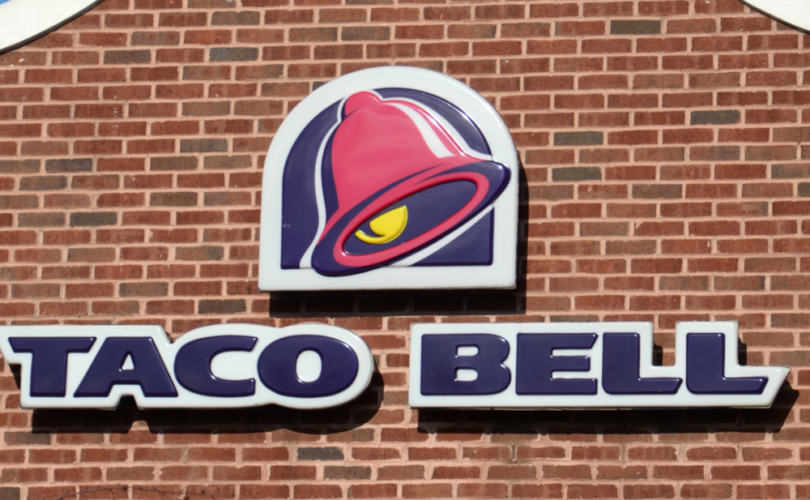 (LifeSiteNews) – Taco Bell, one of the world’s largest U.S.-based fast-food chains, has gone full out promoting LGBT transgender ideology with its new “Drag Brunch” campaign that will see drag “queens” and “kings” perform live at some of its restaurants.

According to Taco Bell, the “Drag Brunch” campaign launched last month will feature “the fabulous drag performer and taco extraordinaire, Kay Sedia, and feature performances from local queens and kings.”

“As a brand that brings people together, the Taco Bell Drag Brunch experience is rooted in celebrating the LGBTQIA+ community and creating safe and welcoming spaces for all,” Taco Bell said in an April 25 press release.

“We understand the importance of creating safe spaces for the LGBTQIA+ community and are thrilled to provide a unique experience that spotlights and celebrates the wonderful artform of drag and its influence in culture with their chosen families,” said Sean Tresvant, global chief brand officer at Taco Bell.

The first “Drag Brunch” was held at a Taco Bell restaurant in Las Vegas on May 1, with other events taking place in Chicago, Nashville, New York, and Fort Lauderdale until the end of June.

Each event will most likely heavily promote the Taco Bell Foundation’s  It Gets Better Project, which is a non-profit organization set up to “empower” young LGBT people worldwide, through the promotion of the LGBT lifestyle.

Although the event is only open to those 18 and over, Taco Bell is known to heavily advertise to a younger demographic.

In recent months, the promotion of LGBT ideology from big media as well as large corporations via drag “queens” and “kings” has become more commonplace.

TV streaming service Discovery+ announced that starting in June it will unveil a new limited series offering a glamorized look at teenage participation in the world of drag.

During the 2021 pride month held last June, Burger King took a shot at Chick-fil-A by announcing it would donate almost half of the proceeds from sales of its chicken burgers to Human Rights Campaign, an LGBT activist group.

Some U.S. states have fought back against the extreme LGBT ideology being targeted at young children.

DeSantis also enshrined parental rights into law though legislation that bans schools from teaching kids in kindergarten to grade three transgenderism and other sexuality-related issues.

LifeSiteNews’ Jonathon Van Maren recently penned an opinion piece regarding the concerns many parents have regarding the “LGBT colonization of cultural spaces.”

“Despite growing pushback from GOP governors like Florida’s Ron DeSantis, major corporations are still doing everything they can to wrap themselves in the rainbow flag,” Van Maren wrote.

“At some point very soon, the photos of women with ugly scars where their breasts used to be are not going to be featured in glamor shots — but in articles warning about the consequences of the transgender craze.”

Scientific literature suggests that while the reinforcement of gender confusion might give a patient short-term gratification, long term, this approach tends to fail or even make worse the mental state of a patient.

This is due to the fixation on “gender affirmation” which at times distracts one from searching for other underline causes for their mental unrest. Also to note is that “transitioning” as it is called oftentimes comes with psychological side effects.