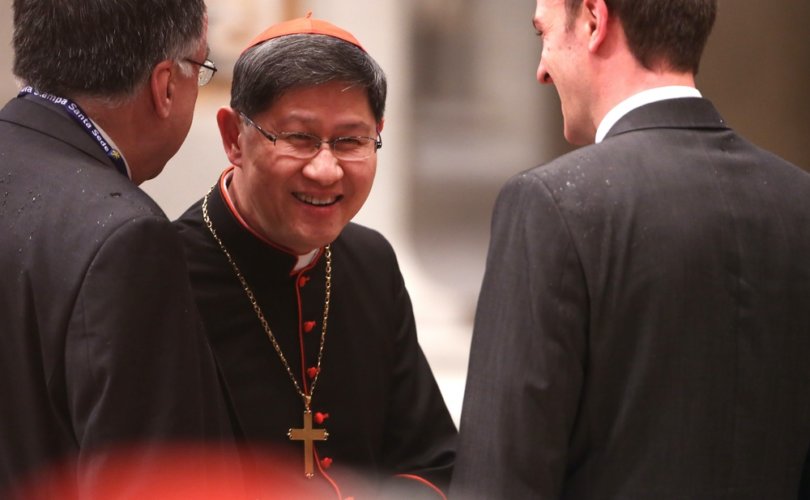 ROME, December 11, 2019 (LifeSiteNews) — Pope Francis has appointed the Cardinal Archbishop of Manila, Luis Antonio Gokim Tagle, Prefect of the Congregation for the Evangelization of Peoples (Propaganda Fide), placing him in a strategically more helpful position for a future papal conclave.

Tagle’s move to one of the largest and most prestigious dicasteries in the Roman Curia is widely seen as a sign that Pope Francis is grooming him as his successor. He is seen as highly sympathetic to Pope Francis’s perspective on doctrinal and pastoral questions, earning him the nickname the “Asian Francis.”

Concerns about the pick have been raised due to Cardinal Tagle’s stance towards “LGBT” issues, his position on Communion for the divorced and “remarried,” and his ties to the liberal “Bologna School.”

In a statement released on Sunday, December 8, the Holy See announced that Cardinal Tagle will succeed Cardinal Fernando Filoni as Prefect of the Congregation for the Evangelization of Peoples. Cardinal Filoni, 73, whose second five-year term would end in 2021, will replace U.S. Cardinal Edwin Frederick O’Brien as Grand Master of the Equestrian Order of the Holy Sepulchre of Jerusalem.

Better known by its former title, the Sacred Congregation for the Propagation of the Faith (Propaganda Fide), the dicastery was founded in 1622 by Pope Gregory XV to foster the spread of Catholicism and to regulate ecclesiastical affairs in non-Catholic countries.

Its prefect has historically been known as the “red pope” because of the extensive powers he enjoyed over mission territories and his role and influence in the appointment of bishops.

As a young priest, Cardinal Tagle studied at Catholic University in Washington, D.C., obtaining his doctorate in theology with a thesis on the evolution of the notion of episcopal collegiality since the Second Vatican Council. He spent seven years in Rome and in 1997 was appointed a member of the International Theological Commission.

He then spent several years serving as a parish priest at the Cathedral in Imus, until 2001 when Pope John Paul II consecrated him bishop of that diocese. In 2011, Pope Benedict XVI appointed him Metropolitan Archbishop of Manila. Thirteen months later, in November 2012, Pope Benedict created him a cardinal, giving him the last red hat he would bestow before his resignation.

Since 2015, Cardinal Tagle has also served as president of Caritas Manila as well as Caritas Internationalis, a confederation of 165 Catholic relief, development, and social service organizations operating in over 200 countries and territories worldwide.

Concerns over Cardinal Tagle’s appointment have arisen due to his stance toward “LGBT” issues, after a video surfaced promoting homosexuality and transgenderism that was produced under his leadership.

In April 2017, Caritas Manila (the social services and development arm of the Archdiocese of Manila) teamed up with the archdiocesan media arms Radio Veritas 846, TV Maria and Catholic Media Network in a ‘social experiment’ which culminated in a video titled ‘The Lazarus Project’ with the hashtag #ResurrectLove.”

Launched on Easter Sunday, April 16, 2017, the video centers on the reactions of people attending Easter Sunday Mass to a prostitute, a  homosexual couple, a homeless man, and a transgender (a young man with long hair and implants wearing a mini-dress) who walk into Mass to sit among the congregation, Michael Hitchborn, founder of the US-based Lepanto Institute, who discovered the video explains.

“In short, the video is pure propaganda for the embrace of practicing homosexuals and transgenders as being in full communion with the body of the faithful,” Hitchborn argues.

It is difficult to imagine that Cardinal Tagle would not have been aware of the project, particularly in light of the fact that a priest of his archdiocese who serves as executive director of Caritas Manila, Fr. Antonio Cecilio T. Pascual, was featured in the video and penned an article promoting the project.

The day after the video was released, it was also posted on Cardinal Tagle’s Facebook page, which along with his official Twitter account, are managed by Jesuit Communications Foundation, the media arm of the Philippine Province of the Society of Jesus.

In 2015, in the context of the Extraordinary Synod on the Family, the Cardinal suggested that the “harsh” and “severe” stance adopted by the Catholic clerics towards homosexuals and divorced Catholics who have “remarried” has done harm and that the Church must adapt to a “contemporary mindset.”

“We have to admit that this whole spirituality, this growth in mercy and the implementation of the virtue of mercy is something that we need to learn over and over again,” he said in a March 2015 interview with the Daily Telegraph.

“Part of it is also the shifts in cultural and social sensibilities such that what constituted in the past an acceptable way of showing mercy, … now, given our contemporary mindset, may not be any more viewed as that,” he continued. “Now with our growing sensibilities, growth in psychology, we realise that some of them were not as merciful.”

When asked if priests must find new ways of dealing with people such as homosexuals and divorced people, he replied: “Yes, I think even the language has changed already, the harsh words that were used in the past to refer to gays and divorced and separated people, the unwed mothers etc, in the past they were quite severe…But we are glad to see and hear shifts in that.”

In 2018, Cardinal Tagle said that he had a “hunch” that “LGBT” issues would be present in the final document of the Vatican Youth Synod, but said he is still unsure what “form” and “approach” it would take. By contrast, Cardinal Gerhard Ludwig Müller said that pro-homosexual terminology such as “LGBT” has no place in the documents of the Roman Catholic Church.

Communion for the divorced and “remarried”

Regarding access to the sacraments for those in “irregular” unions, Cardinal Tagle told the Catholic Herald in March 2015 that the issue was not about changing Church doctrine but about determining “individual cases.”

“Every situation for those who are divorced and remarried is quite unique. To have a general rule might be counterproductive in the end. My position at the moment is to ask, ‘Can we take every case seriously and are there, in the tradition of the Church, paths towards addressing each case individually?’ This is one issue that I hope people will appreciate is not easy to say ‘no’ or to say ‘yes’ to. We cannot give one formula for all,” he said.

But the Archbishop of Manila is seen by many as a rising star pointing to the expanse of the Church’s mission in Asia.

As Edward Pentin of the National Catholic Register observes, Cardinal Tagle’s “close ties with the People’s Republic of China are also expected to be an advantage: His grandfather was Chinese, sent to the Philippines as a child to escape poverty. He is reportedly proud of his second surname, Gokim, which comes from his mother, who is also Chinese.”

“These connections and his interest in China could be significant as challenges continue regarding the Holy See’s relations with China following last year’s controversial agreement on the appointment of bishops,” Pentin also notes.

Cardinal Tagle’s closeness to Pope Francis was particularly apparent during the Pope’s apostolic visit to the Philippines in January 2015, when he celebrated Mass for the victims of Typhoon Yolanda in Tacloban, and for some six million faithful in Manila, making it one of the largest papal events in history.

Yet the attitude and behavior of many of the faithful toward the Holy Eucharist at the outdoor Mass in Manila betrayed a profound lack in Eucharistic and liturgical catechesis among clergy and laity in the Manila archdiocese.

During the moment of Holy Communion, the Sacred Host (which Catholics believe to be the Real Presence of Jesus Christ – Body, Blood, Soul and Divinity) was passed from priests to the faithful and then was handed through the crowds, as can be seen in this disturbing video (see 1:28:15).

Cardinal Tagle’s new appointment may be of additional significance in the light of leaked proposals for the reform of the Roman Curia, contained in the draft text of Pope Francis’s apostolic constitution Praedicate Evangelium (Preach the Gospel), according to which the Congregation for the Doctrine of the Faith (CDF) would survive only as a sub-department of a new “super-dicastery” for Evangelization.

According to a draft text of the document released in May, the proposed “super-dicastery” would combine Propaganda Fide and The Pontifical Council for Promoting the New Evangelization into a “Dicastery for Evangelization,” placing it below the Vatican Secretariat of State but above the CDF.

It is noticeable that this appointment comes after Cardinal Pietro Parolin, Vatican Secretary of State, also seen as a potential liberal successor for Pope Francis, has had to accept responsibility for a questionable bailout scheme for a failing hospital mired in allegations of fraud and embezzlement, significantly reducing his chances of being a successful liberal candidate after the end of Pope Francis’s pontificate.

Disciple of the “Bologna School”

Concerns at the prospect of Cardinal Tagle one day being pope stem in part from his associations with what is called the “School of Bologna,” a liberal school of Italian ecclesiastical historians who for a long time dominated the historiography of the Second Vatican Council and strongly emphasized rupture as a positive reality, accepting the view of the Council documents of the liberal periti (experts) rather than the conformist majority or the conservative minority, or of Paul VI.

There is a struggle in the interpretation of the Council between the people who see the periti as the privileged interpreters of the Council documents, and those who see the understanding of the texts formally presented to the Council Fathers as the authentic guide to their meaning. This dispute surrounds the function of the “timebombs,” i.e. texts which were intended to be read in a more conservative way in order to gain a majority on the Council floor, but in a more liberal way once the Council was over.

From 1995 to 2001, Tagle served as one of more than 50 members of the editorial board of the five-volume, 2,500-page History of Vatican II. The work, authored principally by the Bologna School’s leading proponents, Alberto Melloni and Giuseppe Alberigo, has been criticized for providing an overly progressive reading of the Council.

Cardinal Tagle, 62, is also seen in some circles as a younger and dynamic figure with intergenerational appeal and an enthusiasm for evangelization. One interesting instance of his pastoral style attracted particular attention during the 2018 Vatican Youth Synod:

Cardinal Tagle has found himself ‘young’ when with young people.
This is his message for #YoungPeople as #Synod2018 is drawing to a close. pic.twitter.com/A5Z8QNugAe

Some, however, consider such displays as overly sentimental and lacking the gravitas befitting a “red pope,” and a potential pope.

Cardinal Tagle is expected to be installed as prefect of Propaganda Fide in early 2020.