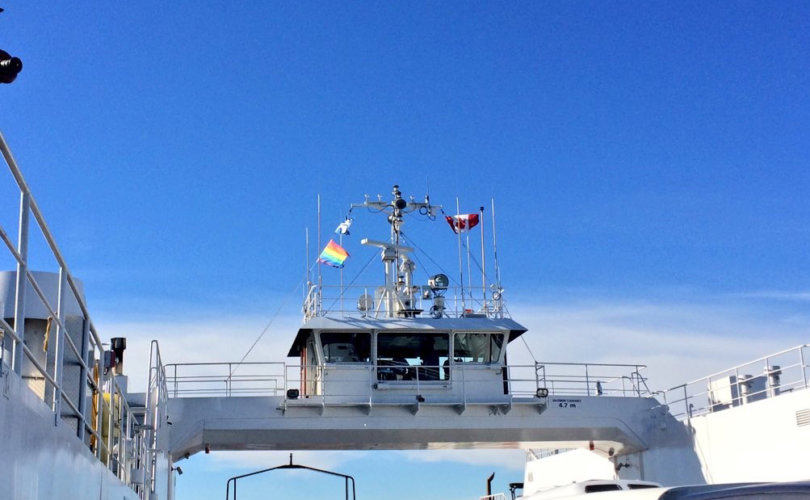 A pro-life group in British Columbia is threatening legal action against the corporation that operates ferries in that province unless BC Ferries takes down all LGBTQ rainbow flags from its vessels.BC Ferries Twitter Feed

VANCOUVER, July 10, 2018 (LifeSiteNews) – Threatening legal action, a pro-life group in British Columbia is calling on the corporation that operates ferries there to immediately remove all LGBTQ rainbow flags from its ships and buildings.

“The Pride flag is offensive, oppressive and traumatic,” writes Kari Simpson, executive director of Culture Guard, in an open letter to the company that operates British Columbia’s ferry services.

“It is a divisive symbol that signifies a lust for power over other groups—it is not a symbol of inclusivity!” Simpson writes. “For those who have been sexually assaulted by a member of the same sex, it is a horrific trigger of the memory of a forced event, that can have devastating effects on the victim—especially a child victim.

“For those who hold constitutionally-protected religious beliefs, it is offensive to be confronted with the sexual politics of the loud, aggressive and abusive political movement that the Pride flag represents.”

At the end of her open letter to BC Ferries, Simpson writes that failure by BC Ferries to remove all Pride flags and related symbols will result in legal action.

On its Facebook page, BC Ferries announced July 3 it was flying the rainbow flag on all its vessels.

“We’re raising Pride flags on every vessel in the fleet this week to celebrate Pride events taking place across BC this summer,” the company’s Facebook page states. “We’re loud and proud of all our customers and crew, everyone is welcome aboard!”

The same message is also being carried on the company’s Twitter feed. And at least some people support that decision.

“Love that @BCFerries is flying the Pride flag! Such a great way to show support for LGBTQ+ workers and passengers. And it looks so gorgeous too,” wrote Robin Stevenson, author of the pro-LGBTQ book PRIDE: Celebrating Diversity & Community, on Twitter.

BC Ferries itself did not respond Tuesday to repeated media phone calls and e-mails for comment.

At Culture Guard, Simpson strongly suggests flying the rainbow flag on BC Ferries vessels might be a violation of British Columbia’s Human Rights Code.

“Are you willing to fly a Christian, Muslim or the Star of David flag?” Simpson asks in her open letter to the ferry corporation. “These groups have the same rights as those represented by the Pride flag. What about celebrating life and denouncing the legalized murder of babies—the ultimate child abuse. Will you fly the symbol of pro-life? If the answer in ‘No’, then you have a bigger problem than the one you have already created.”

The leader of Canada’s only national, pro-life party, Taylor maintains the ferry corporation’s decision to fly the rainbow flag is a sign the provincial New Democratic Party, which supports the LGBTQ community, is playing partisan politics.

“Since the socialist government of BC actually has responsibility for BC Ferries through the BC Ferries Authority, flying these flags is a shameful display of partisan arrogance and rudeness,” says Taylor. “It is a declaration of wished-for absolute authority, ignoring Canada’s charter, which recognizes the ‘supremacy of God’ not the ‘supremacy of the LGBT agenda’.”

He takes exception to the LGBTQ community’s use of the rainbow as a symbol.

“It ignores the biblical, historical meaning of the real rainbow, (you know the beautiful rainbow that appears in the sky under the perfect conditions),” Taylor notes on the party’s website.

“The first rainbow followed the flood of Noah’s day. The flood was God’s judgment on the wickedness of mankind and the rainbow was His promise never again to destroy the world with water,” said Taylor. “However, He will not forever tolerate sin, corruption and rebellion. There will be judgment, but not by a flood. It’s a great mistake to put one’s support behind a rebellion against God.”

Christian soccer player: I was being ‘obedient’ to God by refusing rainbow LGBT jersey

‘We need to take the rainbow back’: Ark lights up to show ‘true meaning’ of the symbol