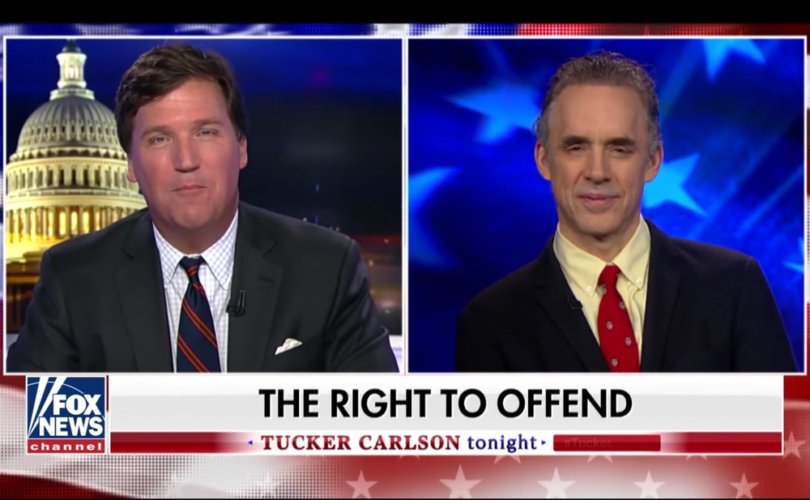 That was Fox News host Tucker Carlson’s theme last night when he introduced a new series for his show called “Men in America.” It will air on Fox on Wednesdays in March.

In a stirring monologue, Carlson laid out statistics, ranging from lifespan to addictions to incarceration to unemployment to wages, that prove that it is boys and men–not girls and women–who are seriously disadvantaged in the USA today.

“American men are failing, in body, mind and spirit. This is a crisis. Yet our leaders pretend it’s not happening,” Carlson said. “They tell us the opposite is true: Women are victims, men are oppressors. To question that assumption is to risk punishment.”

“Our politicians and business leaders internalize and amplify that message,” he continued. “Men are privileged. Women are oppressed. Hire and promote and reward accordingly.”

“That would be fine if it were true. But it’s not true. At best, it’s an outdated view of an America that no longer exists. At worst, it’s a pernicious lie.”

Dr Jordan Peterson, author of the bestselling 12 Rules for Life: An Antidote to Chaos, told Carlson that there is a “directed policy” to emphasize that there is something wrong with masculinity and it should be limited in “all sorts of arbitrary ways.”

“The fact that male behaviour is often diagnosed as Attention Deficit Disorder is a manifestation of that,” he said.

Carlson asked Peterson why people would want to deemphasize or punish masculinity.

“Because it’s easy to mistake masculine competence for the tyranny that hypothetically drives the patriarchy,” the psychologist replied. “It’s part of an ideological worldview that sees the entire history of mankind as the oppression of women by men, which is a dreadful way of looking at the world.”

Peterson underscored that human history has been a cooperative endeavor between men and women and that to describe it as “centuries of oppression of women” is “an absolutely reprehensible ideological rewrite of history.”

This dystopian vision is taught as “unassailable fact” in universities and, increasingly, the public school system, demoralizing boys and young men.

Peterson advised parents to encourage their sons, that is, to instill courage in them, to teach them to be competent and to rely on themselves “to prevail, even in the darkest of circumstances.”

He had even more specific advice for parents regarding their children’s education.

“If you have your children in a school, and [teachers] talk about equity in class–equity, diversity, white privilege, systemic racism, any of that–you take your children out of that class,” Peterson said. “They’re not being educated; they’re being indoctrinated. And there’s absolutely no excuse for it.”

“You might run out of schools pretty quickly, though, here in this country,” Carlson quipped.

But Peterson wasn’t in a joking mood.

“That would be just fine,” he said, stony-faced. “The sooner, the better.”

The statistics Carlson provided–like the fact that 77% of suicide deaths are suffered by males or that 7 million working-age American men are now unemployed–were dire. However, the problem that he found most terrifying is that men are becoming “less male.”

The host stated that low testosterone in men is associated with depression, lethargy, weight gain and decreased cognitive ability.

“You’d think we’d want to know what exactly is going on and how to fix it. But the media ignore the story. It’s considered a fringe topic,” he said.

“We checked and couldn’t find a single NIH-funded study on why testosterone levels are falling,” Carlson said. “We did find a study on, quote, ‘Pubic Hair Grooming Prevalence and Motivation Among Women in the United States’.”