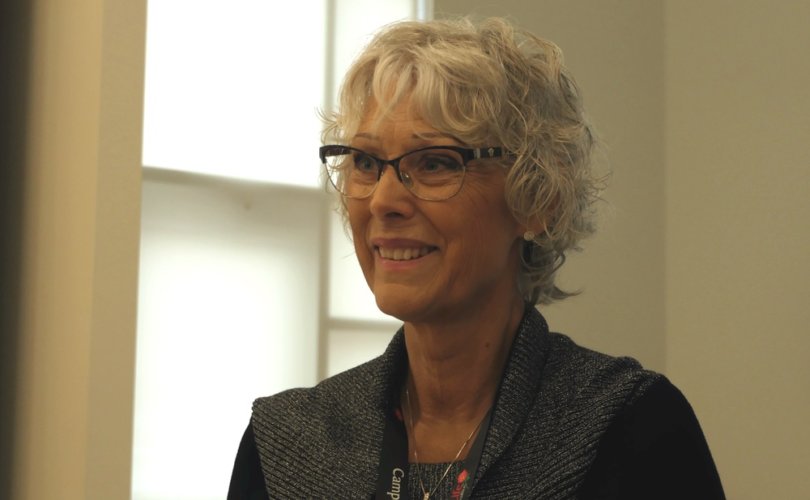 “The ultimate goal is to silence the Christian church in Canada. It is to silence us from talking. It’s totally totalitarian,” the retired expert in counseling survivors of complex trauma told participants at a Campaign Life Coalition clergy luncheon this week.

“It’s about banning…the central ministry of the church, which is conversion… And it’s about banning the ministry to the brokenhearted,” said Dr. Ann Gillies, author of the 2017 book Closing the Floodgates, an analysis of propaganda promoting the sexual revolution.

“And it’s banning the ability of conversion, not conversion therapy, but the power of God to change people. That’s really what’s at the heart of this bill.”

Gillies told pastors and priests at the event organized by Canada’s national pro-life, pro-family political lobbying group that she’s speaking out on Bill S-202 because she’s been “impacted by the LGBTQ community for 40 years.”

It began when her first husband “told me he was gay,” she related.

In the 14 years they were together, she was unaware he had “many, many homosexual affairs.” Then her son told her, shortly after she married her current husband, that his father had sexually abused him for more than a decade.

Gillies described the “horrific” and “traumatizing” ordeal of witnessing her ex-husband going to trial, her son testifying for three days, and her ex-husband being acquitted.

He currently lives in Toronto’s “gay” village, where he is “protected by activists” despite being an alleged pedophile, she said.

Her son lived the homosexual life in Toronto for 11 years, then decided to leave. He went through years of therapy, first anger management, then sex addiction therapy, and is now married and the father of four children.

“I would say I have a vested interest in exposing the darkness,” Gillies said. “I feel called to do this.”

Indeed, both Gillies and her son appeared on Sandie Rinaldo’s CTV W5 “investigative” piece on so-called conversion therapy in Canada, entitled “Thy Will Be Done,” a program Gillies described as “absolutely biased” and a “direct assault on the church.”

Her son spoke about his life in Toronto’s “gay village” – which was edited out.

“And he talked very clearly about, you know, this was a community and he felt love there and cared for and he enjoyed it. He enjoyed it. And he told Sandy Rinaldo, ‘It is the most promiscuous community you could ever find. So it took a long time for me to be free of it,’” Gillies said.

‘A strict agenda to go after the churches’

Wells is “really the chief person driving this bill in Parliament, and going to municipalities,” Gillies said.

The federal bill in question is S-202, introduced by now-retired Senator Serge Joyal, and currently under the direction of Senator René Cormier and at second reading.

That definition is so broad that if Bill S-202 was passed, pastors could not counsel people against watching homosexual pornography, and 12-step programs such as Courage – which helps Catholic individuals with same-sex attraction live chastely – as well as Protestant “ex-gay” ministries such as Exodus Global would “be on the chopping block,” Gillies contended.

But that’s Wells’ express intention, she said. “He has a strict agenda to go after the churches.”

Spiritual counseling and exorcism to be banned

In an October 2019 press release announcing his booklet Conversion Therapy in Canada: The roles and responsibilities of municipalities, Wells included “reparative therapy,” which, as Gillies noted, was developed by late American psychiatrist Dr. Joseph Nicolosi; “re-integrative therapy”; and “sexual orientation and gender identity change efforts” as forms of conversion therapy.

Gillies emphasized that Wells dropped in the midst of that list “spiritual prayer” and “exorcism.”

“He wants to cover it all,” she said.

He’s also been lobbying municipalities to implement therapy bans, with Edmonton’s city council approving a ban of therapy for unwanted same-sex attractions in December 2019. It carries penalties of loss of professional license, loss of business license, a $10,000 fine, and five years in jail.

“How they’re going to enforce it is anyone’s guess,” Gillies said.

But Wells was clear the Edmonton ban was “so powerful” because “it captures all forms of conversion therapy, whether they’re medical, spiritual, or religious,” she added.

Spruce Grove, Fort McMurray, and Calgary have passed bans, while Red Deer is considering one. Vancouver, B.C. has a ban on therapy helping those leave the LGBT lifestyle, as does Ontario and Nova Scotia.

While the Liberals are aware of the rights of religious groups, the Charter guarantees “a right to be secure in one’s person under Section 7 of the Charter, and frankly, my focus here as minister of justice is on the victims of this practice,” Lametti told W5’s Rinaldo.

“They’re young, they’re vulnerable. No right in the Charter gives you the right to do this to another person.”

W5’s Rinaldo asked Gillies what she thought of the APA and the CPA, “and I said I disagree with them. So you know where that puts me in the line of fire,” she related.

For example, Dr. Robert Spitzer was pressured to withdraw his 2001 study that found 66 percent of men and 44 percent of women “arrived at good heterosexual functioning” after receiving reparative therapy.

And a 2018 study by P.L. Santero et al on “the effects of therapy on religious men who suffer unwanted same-sex attraction” was retracted by Linacre Quarterly for “unsolved statistical differences.”

That study of 125 men found that a number “changed dramatically from same-sex attraction to other-sex attraction,” and two-thirds moved a “significant amount towards heterosexual attraction” after conversion therapy, Gillies noted.

So relentless has the misinformation campaign been that Canadians accept three false suppositions about homosexuality: that it is innate; irreversible, and normal, Gillies said.

With the criminalization of therapy imminent, Christians must now push back, become “gently” confrontational, and raise questions about the repercussions of such legislation, Gillies asserted.

She was an “armchair militant” for years, until “finally, it was like God said, ‘you can’t sit there anymore. If you want to change something, you have to do something,’” she said.

“And I pray that that will become our mantra, that we will be as Jesus, that we would stand firm, that we won’t waver in the truth of His word; that we walk cautiously — He didn’t pick fights needlessly, but He didn’t back down — and that we would live courageously in these days.”

Gillies recommended her book Closing the Floodgates, and the Canadian Council of Christian Charities (CCCC) statement to churches as resources, and suggested those interested register for the weekly national leadership briefing at NLBcanada.ca.

Dr. Gillies can be contacted at restoringthemosaic.ca

The Campaign Life Coalition petition against Bill S-202 can be signed here. Concerned citizens are urged to contact their MPs to respectfully express concerns.